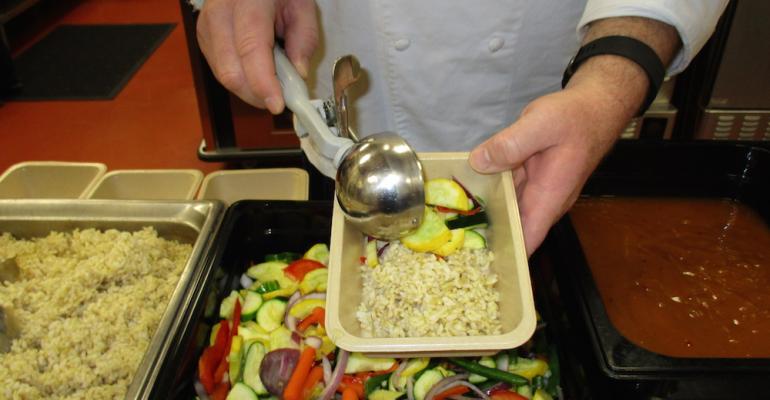 Among the driverless cars and endless tech startups of the Silicon Valley, there is another wave of the future—public schools offering meals made fresh from scratch. A chief example is the Mountain View Whisman School District, literally right across the street from Google’s headquarters, which has recently made an incredible transformation in how its students eat.

In the past year, a board-approved $300,000 has been used to update the district’s production kitchens in order to facilitate a revised menu of freshly made meals. “The driving factor was that the kitchens were not built for scratch cooking,” says Deborah Austin, the district’s director of child nutrition. “When you open a box and simply reheat a product, the meal doesn’t taste very good, it doesn’t look very good and it usually doesn’t smell very good.”

“Everything boxed has been taken off the menu,” she says of the program that serves over 3,000 breakfasts and lunches every day. “We don’t use premade chicken patties or precooked hamburgers, etc.”

In their place, students dine on entrees such as sliced, roasted chicken on a bed of mixed greens; stuffed zucchini with couscous, cheese and roasted veggies; and patty melts on lavish—all made fresh from scratch using new equipment: stoves with burners, double stack ovens, combi ovens, and tilting skillets and kettles.

“When you cook from scratch, you’re able to control the ingredients that go into a meal,” says Austin of the move toward healthier fare. “But also, freshly made food is more visually palatable because, after all, people eat with their eyes first.”

As a result, Austin says, paid participation in their lunch and breakfast programs has increased by to 30 percent, a notable jump in a middle-class district where most of the students don’t qualify for free or reduced meals.

Austin, who has a restaurant background and 45 years of foodservice experience, joined Mountain View Whisman School District a few months ago after executing another turnaround at the nearby Alameda Unified School District, which went from serving precooked food to a district that serves 80 percent made-from-scratch meals. Austin says that in her first job with a public school district, she brought a chef onboard as no one told her most schools just opened boxes and reheated food. She’s brought scratch cooking into schools ever since.

At Mountain View, Austin once again hired a head chef, Bob Mencimer, who has a background in restaurants. “When you have people on board with restaurant backgrounds,” says Austin, “they not only bring the focus back on cooking from scratch, but they know how to make the food taste good and look appetizing.”

Chef Bob, as he is affectionately called, makes all sauces from scratch and regularly brings a portable grill to the elementary schools for an action station to cook, for example, pancakes to order.

Students from the district’s 10 schools also take field trips to the production kitchen and participate in a Farm to Lunch program, in partnership with the nonprofit Living Classroom, that combines hands-on experience of growing food with the health benefits of better eating. From a recent harvest, the students were able to offer 250 servings of kale chips and kale salad. Fresh fruit and vegetables are also delivered daily from local farms.

Amongst the district’s success improving their food and paid participation, staff is a continued challenge. “First it’s difficult to find staff to work just two hours of service a day,” Austin says. “And for those employees who had been here a long time, they had to be rigorously trained on the new scratch cooking procedures and new equipment.”

Austin, who started with the district when the transformation was bout 65 percent complete, will ensure that the remaining kitchen renovations and equipment upgrades happen before next summer. They are getting some outside help in their goals as well: Each school will also get a new salad bar, donated by the Silicon Valley Leadership Group, nearly doubling the amount of fresh fruits and vegetables available at each meal.

Although the district has gotten rid of all pre-prepared food, it still outsources its pizzas, Austin says, “because we simply don’t have the means to drop 500 pizzas at one time. So for right now, we make sure the standard of those pizzas matches the rest of our menu and we hope to cook our own pizzas onsite in the years ahead.”

Austin is also considering getting the district’s production kitchen into catering so that other districts can start contracting with them for their high-quality meals.