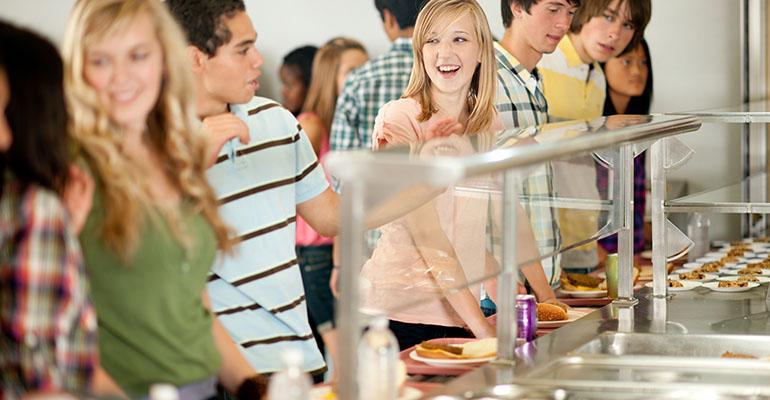 Four high schools in the Shelby County district have gone to a single hour-long lunch period, which has required some adjustments from the nutrition staff.

The typical high school lunch period lasts a half hour or less, which isn’t great for kids who often have to bolt down their food after going through the lunch line, but it is a structured schedule for the meal service staff, one they are used to and know how to handle.

That traditional approach was in place at four high schools in the Shelby School District in Alabama until this year, when the schools switched to a single hour-long lunch period to give students a “halftime” break in their day. In fact, the initiative has been termed Halftime by the district and seems to be popular with students, who can use the time not only to grab something to eat in a more leisurely way, but also to do some socializing, meet with teachers, conduct club business or even, in extreme cases, do some studying. 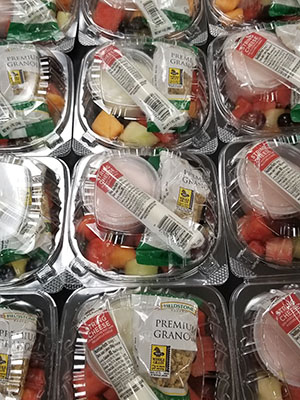 Photo: One of the most popular new options has been a line of grab-and-go reimbursable meals served out of both the cafeteria and the concession stand at the other end of the building.. Courtesy of Chelsea High School.

While the new schedule may work for students and academic staff, it has posed some challenges for the foodservice team. For example, Chelsea High School used to serve lunch in four 25-minute periods. Now, all 1,250 of its students have the same hour off, which can complicate meal service because traffic is harder to predict, says Sherrie Jordan, child nutrition manager at Chelsea High.

“We really liked [the previous schedule] because it was more structured in that we knew how many to expect coming in in each group, whereas now, we’re not sure how many to expect,” she explains. “That’s our main issue now—figuring out how many are coming in so you know what to fix.”

The campus is closed over lunch, so students can’t leave to get something to eat from offsite, but that doesn’t mean they necessarily patronize the in-house meal service either, at least not for full meals. In fact, Jordan notes, the new hour-long lunch period so far has resulted in a drop of about 15% a day in the number of reimbursable meals served because more students now grab only a drink and or snack instead of a full meal.

Students also have more freedom than before to go to different areas of the school, including an enclosed outdoor courtyard, and Jordan has adapted to this by setting up more tables in the different areas. The program has also converted to disposables to eliminate the problems posed by trays and permanentware being left all over the premises.

“We are learning to adapt and encourage the students to visit the cafeteria, [but] we cannot keep doing what we have always done and expect to get different results,” Jordan explains, so “we are changing up the way we do things in order to do what is best for the students and see that they are all offered the same good nutritious meals as they always have been.” 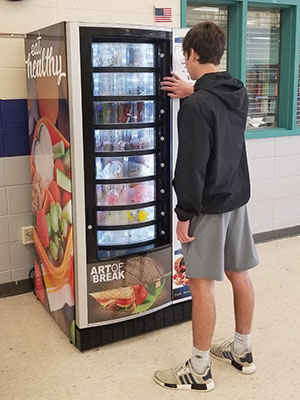 Photo: A vending machine offering a la carte beverages and snacks is another recent addition meant to provide alternatives during the expanded lunch period. Courtesy of Chelsea High School.

Among the most successful innovations to meet the new schedule has been a line of packaged grab-and-go reimbursable meals that students can get either in the cafeteria or at a snack bar in the front of the school building (the cafeteria is at the opposite end, in the back) that sits next to the gym and serves as its concessions stand during games.

“I love to try out new items,” Jordan explains, “and have been adding in new sandwiches and wraps to our grab-and-go meals. The sandwiches seem to be popular for the students to get in a hurry and take with them. We recently introduced a Cuban club sandwich and panzeeni [a kind of Italian flatbread sandwich], which are both popular. Also, we have just started getting in a new ciabatta bread and panini type bread [and] I have been making a variety of new flavors of sandwiches with those.” 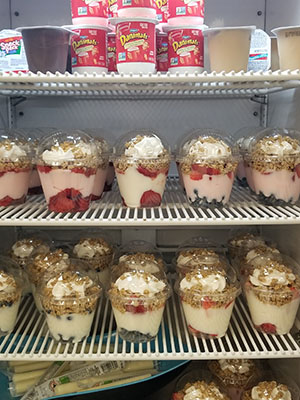 Photo: Fresh fruit and yogurt bowls, yogurt parfaits and smoothies made fresh every morning are served at both breakfast and lunch. Courtesy of Chelsea High School.

Currently, the Chelsea dining staff serves about 75 grab-and-go meals a day at lunch and another 30 at breakfast, when choices include a large variety of fresh fruit and yogurt bowls, yogurt parfaits and smoothies made fresh every morning. These are served at lunch as well, Jordan adds.

The challenge is not only to provide desirable meal choices to draw teens intent on socializing and relaxing, but also to make it more convenient for them to get food and eat it. The cafeteria features two serving lines, one self-serve line and one self-serve full salad bar, plus three registers to get kids out fast.

“We've purchased additional tables for them and added a few to the front lobby as well,” Jordan adds. “We serve both breakfast and lunch in the cafeteria and in our concession stand in the front lobby, [so] this gives students an opportunity to buy a meal, snack or drinks in either location. We also added a vending machine and filled it with healthy snacks, water, vitamin water and a variety of items that we change up daily.”

Another vending machine for the other end of our school, where a new two-story addition was opened this year, is in the works.