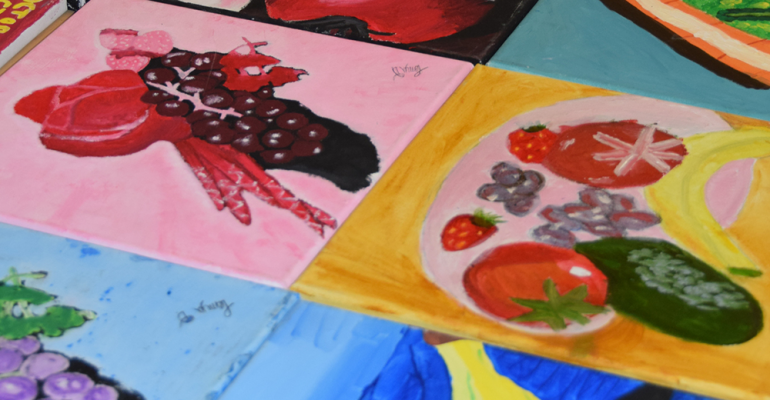 Paintings of fruits and vegetables are now being displayed across schools in the Cleveland Public School District.

If you want to create an attractive dining program, you need to look beyond just the food to the atmosphere. That seems to be the thinking behind an initiative undertaken this past spring by Chris Burkhardt, executive director of school nutrition for the Cleveland Metropolitan School District, through which he has commissioned paintings of fruits and vegetables created by students from the Cleveland School of Arts (CSA). The works—some 80 of them in the first go-round—are destined to hang in district cafeteria to adorn what are otherwise big, blank walls.

“We need some vibrancy,” Burkhardt says. “The cafeteria is something that should be celebrated. We are doing that with art.”

Visual arts teacher Brittainy Quinn guided the students, including a majority who were just putting the finishing touches on their ninth-grade year. Some of the students found inspiration while helping Quinn tend a community garden, a grant-funded project that also included painting and cooking classes and for which Burkhardt picked up the tab for art supplies. It was less expensive than paying professional artists, and the students were able to develop their skills and gain exposure, he says. 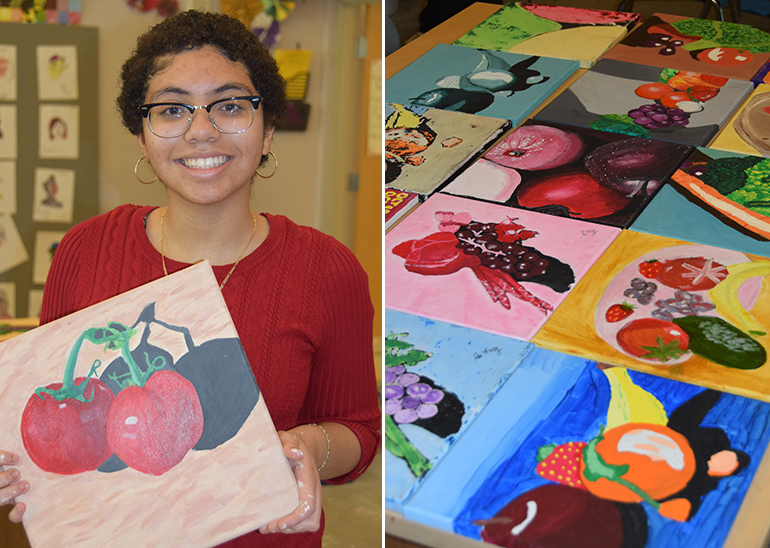 Quinn’s visual arts class is part of CSA’s integrated arts program, which was launched three years ago and is designed to expose students not only to visual arts but also to music, literature and theater. She plans to make cafeteria paintings an annual back-to-school project because, with about 100 schools in the district, there are a lot of walls to cover, and Burkhardt welcomes all the pieces the students can create.

Certainly, the students are enthused not only by a chance to have their work displayed publicly, but also where people they know can see them as Burkhardt says he will try to place paintings in the students’ former elementary schools and then later rotate them throughout other district venues.

One of the young artists, Aniya, a tenth-grader, who has been painting for only two years, says she would be happy to have her work on display, perhaps starting at Charles W. Eliot PreK-8 School, her alma mater.

“This is a unique experience,” she says. “It’s uplifting.”

Another tenth-grader, Josiah, said he feels “awful proud” to know his painting will go on public display. He hopes it lands at his former school, Franklin D. Roosevelt and shows a favorite former teacher how far he has progressed. “I love art,” the aspiring clothing designer says. “I’m thankful it exists. It makes everything look special.”

Burkhardt joined the District in early 2017, after nine years as director of child nutrition and wellness for the Lakota schools, near Cincinnati. He has tried to add some zest to district foodservice, most recently by having Executive Chef Tim Wright give cooking lessons to kitchen crews who have been used to simply warming and serving dishes. He also is experimenting with items like Jamaican meat pies and customizable street tacos.

“We’ve got to realize that it’s not one-size-fits-all,” he said. “Everybody’s palate is different.”

Best Concepts: Chartwells’ Mood Boost teaches the connection between how students feel and what they eat
Sep 29, 2020