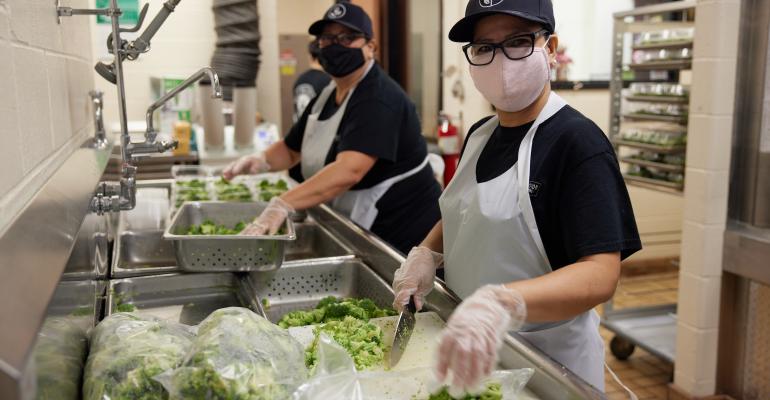 Prince William County Schools (PWCS) got a lot of press recently from a visit by Rep. Jennifer Wexton and a group of USDA officials to highlight its meal program’s success with local sourcing. Virginia’s second largest public school district with 91,942 students and 101 school sites, PWCS has a lot of kids from a diverse mix of economic backgrounds to feed, serving some 50,000 lunches and 30,000 breakfasts on an average day.

The most recent data, from two years ago, showed of 44% district students qualifying for free or reduced-price meals under the National School Lunch Program. It’s also the most diverse county in Virginia and the 10th most diverse in the country, with a large proportion of Muslim students, a factor that also impacts menu creation.

“We’re the largest restaurant chain in Virginia,” states Adam Russo, who has been PWCS director of nutrition services for the past six years. “We serve 15 million meals annually—and last school year we served 22 million!”

Those meals are increasingly made of ingredients from local, often smaller producers.

“We’ve always tried to procure as local as possible,” Russo says. “Even before I got here, they were trying to procure even more local items—that was always the goal because, obviously, the closer the product is [sourced from] the fresher it will be, the yummier it will be, and at the end of the day that’s the business we’re in—serving yummy meals.”

Over the past two years, that emphasis had an added benefit, he notes, “because it turned out that a lot of our local partners were the ones that were able to meet our needs the best.” That has resulted in an “exponential” increase in the use of local product, “especially last school year when we were handing out grocery kits for bulk meal service for kids that families can pick up drive-thru style,” he explains. “We found that it was difficult to get the quantities we needed, and it was our local producers who were best able to meet that need.”

One reason for that, Russo says, is because PWCS represents a major customer for most of the smaller local suppliers it works with and one that remains a consistent market all year, with just a short summer slowdown, “so they can reliably plan around that,” something that was especially the case over the pandemic period, when most commercial customers stopped or severely curtailed purchasing while the school district continued to operate its meal service.

Russo cites a tortilla factory located in nearby Manassas that makes both the soft tortillas and the tortilla chips used by the PWCS meal program. “They’ll crank out tortillas until midnight to make sure have them,” he says. “They understand our consistent business and they want it.”

The tortilla supplier also represents the quality that local sources can bring, he adds.

“They were delivering the tortillas themselves and they were coming to us warm because they had just been made—talk about quality! talk about fresh and yummy! It’s really hard to beat that!”

The program does do scratch baking four times a week of items like dinner rolls, bread, garlic rolls and cinnamon rolls as well as even shortcake and souffles because of the staff’s culinary talent, but turning out tortillas in the quantity needed was deemed impractical, especially since the program lacks fryers.

However, scratch production, not just of baked goods but of other items is a longtime hallmark of the PWCS meal program. There is a scratch-made entrée on the menu every day at every level, Russo proudly notes—Rep. Wexton was treated to the program’s scratch-made quesadillas on the day she visited, for instance.

On another day it may be meatloaf served with a scratch-made dinner roll and an out-of-the-ordinary vegetable like broccolini, or a layered lettuce salad made with bibb lettuce from a local hydroponic lettuce farm.

“We try to serve things you may not traditionally see on a school menu to delight our scholars and expand their palates,” Russo says. He also stresses that the meals are uniformly served across the district at all levels.

“I’m a big advocate for serving equitable meals and not a big fan of serving special meals at certain schools, so when we do anything, we go whole hog so that, other than portion sizes for the different levels, the menus are pretty identical,” he explains. “That means that if a high school on the eastern side of our county is serving our scratch-made nachos with pico and our other lovely ingredients, then the elementary school 40 miles away on the western side is serving something very similar, except with a little less [portion size].”

The approach is to have three hot and two cold options at lunch each day, with one hot option being vegetarian. In addition, all schools have unlimited, self-serve garden bars that students can use to assemble side dishes or construct an entrée salad.

The self-serve approach has been in place since the start of the school year, with pandemic concerns addressed with protocols like more frequent changing out of utensils and putting a hand sanitizer station at the front of the line.

For the some 800 district students whose families have chosen to have them continue to learn remotely, the program provides weekly meal packages.

Other than the tortillas and bibb lettuce, other major categories that PWCS primarily sources locally include milk, popcorn chicken from a nearby Perdue Farms operation and, especially, produce. The program works with two separate produce vendors and specifies that it looks for local sources as much as possible.

Currently, most of the program’s beef comes from the USDA commodity program but Russo says he is looking at a potential local supplier of this category, as well as another local firm that may be able to supply bulk milk that students can dispense in individual quantities to reduce waste. Another significant local vendor is Cuisine Solutions, which markets sous vide packed items such as chicken.

With a background in restaurants, Russo has a different perspective on school food from someone who may have spent their career in it. That includes looking beyond the traditional supply channels…

“Unfortunately, I think at times operators in our business [school food] get pigeonholed and they only see the same products—they go to the same trade shows and they see the same foods, meet the same partners—but we very much believe that we are a restaurant that just happens to be in a school, and it’s something we’re very proud of,” he explains. “I would put my team up against any restaurant!”

Consequently, Russo makes it a point to expand his search for products beyond traditional school food events. “When vendors call us, I say, ‘Show me your whole product line and not just your K-12 product line’.”

He says he and his team attend events like the National Restaurant Association Show and college/university shows to see products that may not be featured at school food shows.

“Unfortunately, people sometimes try to sort our mail because they think they know what we want, so they’re pre-selecting for us,” Russo says. That doesn’t mean factors like nutritional guidelines aren’t important—“in fact, we care about that more than we care about the other pieces,” he notes, but other concerns like price points are more flexible, especially if there is volume buy-in from students.

“If we spend a little more on broccolini and a bunch of kids take it, we can get top-line revenue to make up for the bottom line,” he explains.

Russo says he is always on the lookout for new vendors. One promising avenue he cites is local farmers markets, even though Prince William isn’t really a rural county, though it does have a few farms. He says when he first arrived, he went to a farmers market and asked one of the vendors, ‘what happens to all of the produce you don’t sell?’ The result: a deal to sell to the school system.

“It was a surprise to them because they didn’t know we existed [as a market], so putting ourselves out there really benefitted us,” Russo says. He adds that these contacts often lead to getting the word out to other potential suppliers, who then approach him about their wares.

Of course, the logistics of getting product from numerous small suppliers to a district with over a hundred service points is daunting but Russo says he’s worked out a system with his produce vendors to serve as aggregators. Down the line, he is working on a central facility that can serve as a receiving and storage point.

“The goal is to up the amount of local foods we can take on because, if we can be the central hub, then I can go to multiple smaller vendors and make it work.”

The challenge is that Russo refuses to accept quantities that don’t meet the requirements of the whole district. He says he’s had to turn away quality pears from one small vendor because they only had enough for a third of the district.

“I don’t like not doing the same thing at every school because there’s an inequity in that, but if I can get pears from several sources and aggregate them, then we can divvy them out evenly