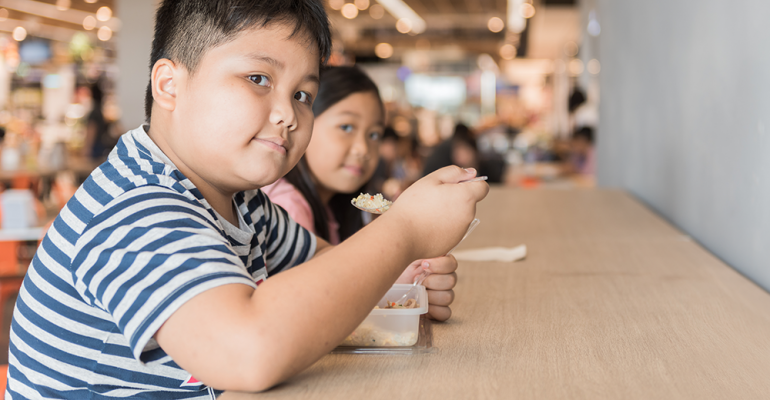 Does breakfast in the classroom make kids fat?

A clinical trial of nearly 1,400 Philadelphia grade schoolers found that obesity was significantly higher among students offered breakfast in the classroom rather than just in the cafeteria.

A recent study that was just published in JAMA Pediatrics found that a greater prevalence of obesity was one consequence when the School Breakfast Program was offered in the classroom rather than just in the cafeteria before school. The researchers from the University of Michigan School of Public Health and Temple University’s Center for Obesity Research and Education, in partnership with the Food Trust and the School District of Philadelphia, followed 1,362 low-income fourth- through sixth-graders at 16 Philadelphia public schools for about two-and-a-half years to compile their findings.

After two and a half years, the researchers found no difference between students who got the cafeteria meals and those who got the breakfast in the classroom in the proportion of students who were classified as overweight—that is, had a Body Mass Index (BMI) above the 85th percentile. However, of those who were over that threshold, a much greater number of those getting breakfast in the classroom were significantly over and classified as obese, which is defined as having a BMI over the 95th percentile.

The researchers theorized that a reason for the disparity might be that some already overweight students who get breakfast in the classroom may also have already eaten breakfast at home, or bought food on the way to school. These students would be less likely to also go to the cafeteria to get more food, but if they were presented food when they got to the classroom, they were more likely to accept and eat it, hence getting a double breakfast and the excess calories that would lead to the extra weight.

“Breakfast in the classroom in combination with breakfast-specific nutrition education is an effective method to increase School Breakfast Program participation,” the researchers conclude. “However, it was not an effective strategy to prevent overweight and obesity among low-income, urban, older elementary and middle school–aged children, and, in fact, increased incident and prevalent obesity. It is essential to identify alternative implementation approaches that increase School Breakfast Program participation without promoting obesity.”