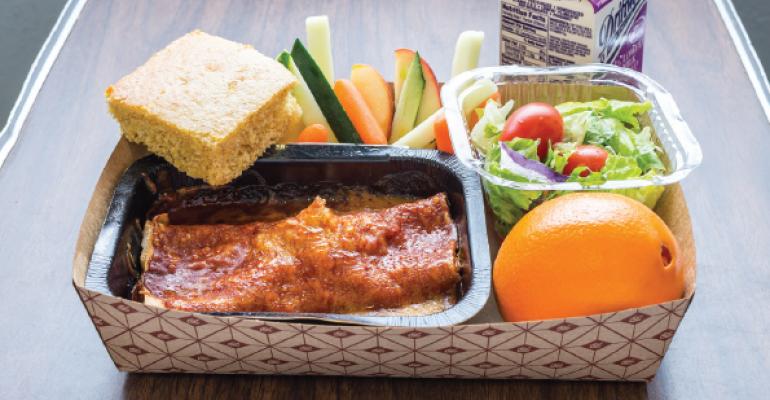 GO AHEAD AND HAVE A COW, MAN!
At El Monte City School District, in California, nutrition doesn’t just mean a healthy meal conforming to USDA standards. It means trotting out a host of extra activities designed to engage youngsters about healthy lifestyles.

And, yes, if that means hauling a live Jersey cow onto school grounds to offer a demonstration of where milk comes from as part of a larger session on the healthfulness and variability of dairy products, go for it!

The cow, part of an educational program in cooperation with a local dairy, is just one way this K-8 district east of Los Angeles augments its Smarter Lunch meal program. 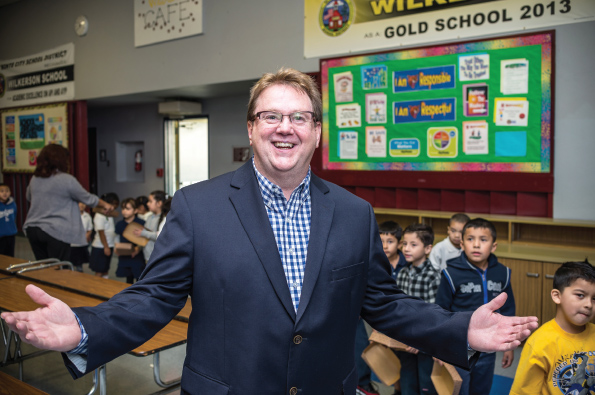 STRIVING FOR EXCELLENCE: Dr. Robert Lewis has headed El Monteâ€™s nutrition services department for the past six years, during which the district has won numerous national awards from the Alliance for a Healthier Generation, Letâ€™s Move! and Share Our Strength. Photo: Joshua Targownik

All this is done in a community in which 90 percent of the student body qualifies for free or reduced-price meals because of low family income. 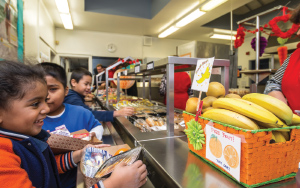 FRUITS OF THEIR LABORS: Fruits and veggies are promoted on the lunch line with kid-created signage and by farmer in the classroom events. Photo: Joshua Targownik

El Monte has also been one of the districts at the forefront of working with former President Bill Clinton’s Alliance for a Healthier Generation (AHG), which not only requires higher nutrition standards than the USDA but also emphasizes broader wellness-based activities.

El Monte is the only district in the country to win four AHG Gold medals and in 2011 all district school sites won the HealthierUS School Challenge, which earned more than 20 district employees a trip to Washington to meet first lady Michelle Obama, whose Let’s Move! initiative conducts the challenge.
More recently, El Monte won a 2014 No Kid Hungry Breakfast Champion Award from the Share Our Strength organization.

Getting Kid Buy-in on Nutrition
“We want to give our students a full picture of health and what it means to have a healthy lifestyle,” explains Dr. Robert Lewis, director of nutrition services for El Monte Schools, who has been with the district for the past six years. “Part of that is our Smarter Lunchroom program [based on the Smarter Lunchroom Movement from the Cornell Center for Behavioral Economics in Child Nutrition Programs], but we also work with local organizations and the city of El Monte on citywide events to involve the whole community.”

However, the core of the nutrition services department’s mission is still the meals served to kids, which must not only be nutritious but also appealing. 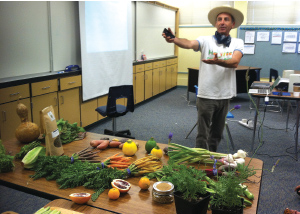 Students regularly get to interact with local growers and learn about farming and raising crops.

“We can talk all day about what’s good for kids, but if they don’t eat it, it’s no good, so we like to get direct input from them on what they would like,” Lewis says. Nutrition Advisory Clubs at each school are led by the department’s three nutritionists, who also all make regular site visits to conduct nutrition education classes, gauge taste preferences and bring back menu recommendations.

A recent innovation is a peer-to-peer education program where older students work with younger ones to come up with displays focused on different aspects of wellness. “Sometimes kids take lessons better from other kids than from adults, and it also gets students more actively involved in formulating the message,” Lewis says.

Students also help come up with names for different selections on the school menus, such as Super Vision Carrots, Incredible Green Beans and Sweeter Than Honey Grapes. An art contest each spring has students working with art teachers on submissions to be included on a district wellness calendar that is then published and distributed showing community wellness events as well as district ones. The district superintendent also holds an annual essay contest focused on wellness where the class with the best submissions gets to make a healthy recipe in the central kitchen.

“Our biggest emphasis is pushing fruits and vegetables,” Lewis says. A Harvest of the Month program emphasizes a different item each month, from grapefruit and kiwi to persimmons, and El Monte participates in the USDA Fresh Fruit & Vegetable program to ensure economical access to the widest variety possible. The “Fear Factor” events, in which kids are challenged to try unfamiliar fruits and vegetables, are part of a larger strategy to get students to expand their palates. 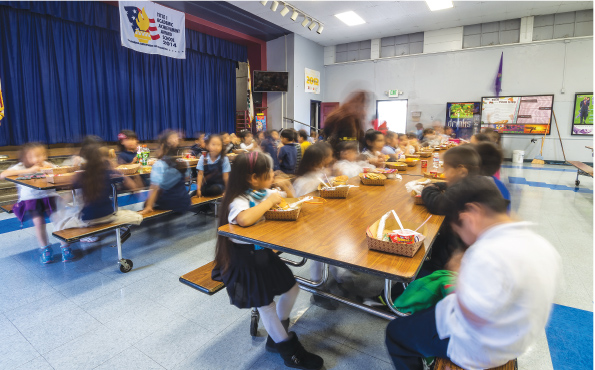 What’s on the Menu

A typical day’s lunch menu at El Monte includes two fruits and two vegetables along with an entrée. While the bulk of the menu remains composed of convenience items, the central kitchen operation is increasing the number of from-scratch dishes it turns out, particularly baked goods like blueberry mini muffins, Texas cornbread and a sweet potato bread made primarily from USDA commodities like whole-grain wheat, canned sweet potatoes and frozen eggs.

El Monte also serves Universal Free Breakfast and added a supper program two years ago. The breakfast is served in the classroom for the elementary grades and as on-the-go grab-and-go meals on school patios (this is Southern California, after all) for grades 7-8 (El Monte has seven K-6 and seven K-8 sites).

The supper program started when Lewis realized he could get federal reimbursement if he bulked up his existing after-school snack program with three additional components.

Suppers, typically served from 2:30 p.m. to 4:30 p.m. to kids who participate in afterschool activities, include items like chicken pesto wraps, turkey on ciabatta bread and sub sandwiches with turkey ham on a torpedo bun.

“These are almost adult-type selections since the kids in the supper program tend to be older,” Lewis offers. “We serve the food in bento boxes with different compartments for the separate items.”

Taste Tests, Farmers and Hands-on Learning
Because so much of the menu is still composed of pre-prepared items, Lewis works hard to identify vendors that can supply the products that meet El Monte’s standards while appealing to the kids. A Taste Test Expo each spring brings some 80 students to the city’s community center to meet with vendors and sample potential items for future menus.

A fish patty product for the lunch menu and a whole-grain cinnamon roll for breakfast are two recent products added to the El Monte menu as a result of these taste tests. This spring, Lewis says he will be introducing a veggie burger product that received encouraging reviews at the last expo. 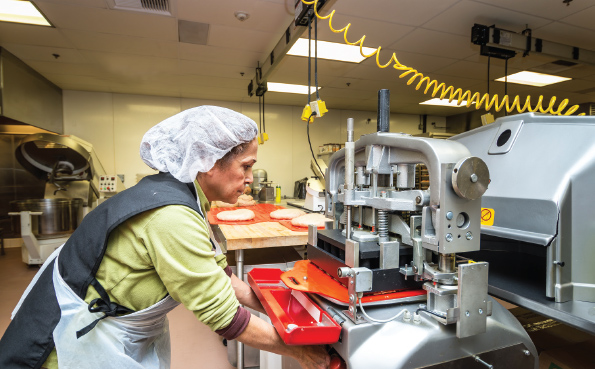 The Taste Test Expos also include an educational component in which local farmers give instruction on planting seedlings. Students then get a chance to do some planting themselves, and what kid doesn’t like playing with dirt?

“We’re talking about inner-city kids here,” Lewis emphasizes, “so they may not even know where things come from, that strawberries grow on the ground, for example.”

Farmers markets held at school sites give kids a chance to interact with local growers and make purchases themselves using tickets handed out by the school that can be exchanged for product.

They also get a chance to do their own cooking at special Kids Culinary Camps each summer. At these weeklong events, groups of 60 to 80 similarly aged students learn about a different cuisine each day. Each session includes a hands-on cooking period where the students, assisted by a staff nutritionist and parent volunteers, get to prepare an item for themsevles.

Students are also sent home with recipes for some of the dishes served at the schools, an initiative that in turn led to a parent education program when it was discovered that many were unfamiliar with some of the ingredients.

Now, one staff nutritionist is tasked with family education, which includes grocery store tours to promote smarter shopping and cooking classes at different store locations around the city (and now the county, thanks to a county grant) three times a month.

Physical activity is promoted in noncompetitive ways like dancing, hula hoops, ball tosses and regular walk-to-school days with staff serving as chaperones for kids who get to enter a prize raffle if they finish.

Interactive, creative and fun, El Monte doesn’t break the bank with its program, but it does make a big difference.