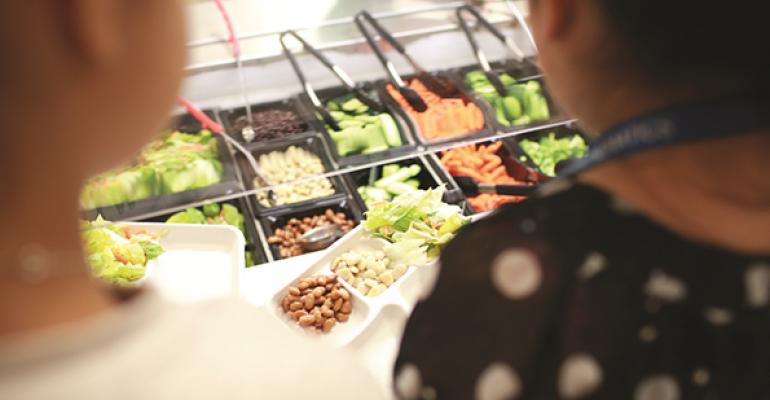 Like many things in schools, the Life Time Foundation was inspired by a concerned parent. When Bahram Akradi sent his eldest child to school, he found the lunch options lacking. But as Life Time Fitness' CEO, he had the right connections and know-how to do something about it.

“School foodservice operators already know that a nutritious school lunch program provides significant benefits to students. In fact, many have taken positive steps in the right direction. However, strained budgets and other restrictions can pose challenges that limit progress," Akradi said in 2011 when discussing the foundation. "It is our goal to work collaboratively with the forward-thinking, innovative teams to design and test a model that can be adopted by schools nationwide as we work to positively impact the troubling nutrition issues children face.”

When Akradi started the foundation about seven years ago, he had been successfully running Life Time Fitness, a Minnesota-based company that runs over 110 health clubs throughout the US and Canada, for over a dozen years. The foundation began by giving to other charities for a few years before starting to work directly with schools.

"We developed a nutrition philosophy that was a little of a higher bar than the USDA," says Barbara Koch, director of the Life Time Foundation. "While we completely respect the work that the USDA is doing, we felt like maybe there were some gaps and specific things that we could add our expertise [to]. And we identified seven ingredients that we were very concerned with that exist in mostly processed foods. They are high fructose corn syrup, artificial colors, artificial sweeteners, artificial preservatives, bleached flour, trans fats and hydrogenated oils, and antibiotics and hormones."

"By eliminating highly processed everything, you pretty much eliminate those seven ingredients," Koch says.

The first school to approach the foundation after it announced it was looking for partners in 2011 was Deephaven Elementary, a local school in Chanhassen, Minn., part of the Minnetonka Public School District. Although their school was thriving in many other areas, school nutrition was lacking, school officials told the foundation. The foundation started with recipe development and training; they wanted to create healthier versions of familiar food. One example: a pizza with 100 percent whole-wheat crust, with a tomato basil sauce that didn’t use a sweetener, and fresh, not processed, cheese.

For the school to make meals like this every day, it needed 35 cents more per meal than what it was currently spending. The foundation's first grant was to subsidize those meals and pay the difference.

After this initial success, the foundation hoped to expand its efforts to all six elementary schools in the district. It worked with the district manager and food suppliers and found that with the increased margins of buying for six schools, and a bit of negotiation, they could get the clean food they wanted at the same price they were already paying.

"The buying power is the model here," Koch says. "If we can get schools to insist to food manufacturers that they are going to buy clean products, the manufacturers will have to provide that product and do it at a decent price."

Koch would like to see this happen with all of their partner schools.

"We like to be a spark for change," Koch says. "That food subsidy is meant to help be that spark for a year or two, and hopefully we will help change procurement practices enough that [schools] won’t rely on a food subsidy from the Life Time Foundation forever."

They've also learned a lot along the way.

"I had not idea how complicated this industry is," says Koch, who previously worked at the Children’s Cancer Research Fund and the Make-A-Wish Foundation. A grant at these organizations "it was a transaction. It happened, and there was a start and an end to it," Koch recalls. "Here, what we do in with our foundation, the work that we do is relationships."

One of those relationships has been with Bertrand Weber, culinary and nutrition director at Minneapolis Public Schools. The district was well on its way to healthier school meals but needed the financial support to make institutional changes. Rather than money to work on recipes and meal purchasing, the foundation gave the district an equipment grant of $550,000 to completely update the central kitchen for the district's 62 schools. This grant helped buy an automatic filling/lidding system, to help package salad dressings; a vacuum packaging machine, to cook proteins in a sous vide style; and a form fill seal packaging machine, which cuts labor costs of bagging food items, among other items.

"I love what they're doing, and I’m working with them on how to share and make this a really sustainable model going forward," Weber says. "I don’t want a school district to stop doing great work if the funding stops coming."

That funding is available from The Life Time Foundation for the right schools. The foundation is looking to distribute one million dollars a year in grants and is currently looking for new school partners, Koch says. But she warns, "Our idea of change takes work."