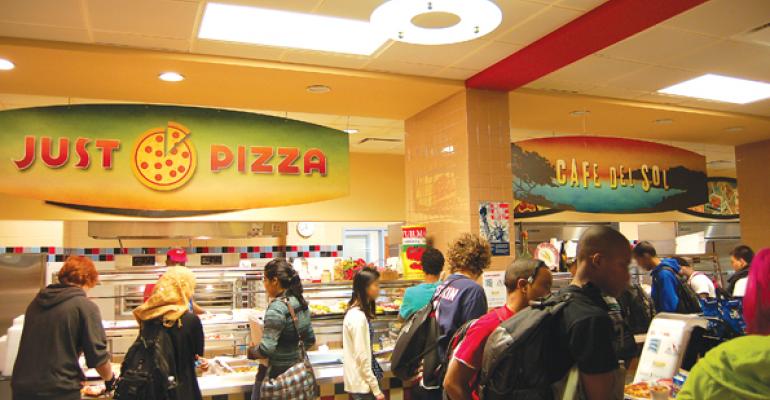 "if we have to go through another year like this one…” Dr. Becky Domokos-Bays lets the thought trail off as if the director of school nutrition services for Alexandria (VA) City Public Schools (ACPS) is at a loss for words. Dr. Domokos-Bays, who is also chair of the School Nutrition Association’s nutrition committee, is talking about the challenges posed by the new school meal menu standards.

Even for a district as accomplished as ACPS—its schools are certified as Healthier US School Challenge sites, and the district has been an SNA District of Excellence since 2006—meeting the new requirements has posed a high hurdle, one that she has, for now, met, but at a cost. Her program, which had been running in the black, is now in deficit despite the additional six cents per reimbursable meal she began receiving after meeting the new standards by last October.

The primary culprit is food cost, which has grown from under 40% to 46%. Labor is 45%. Meanwhile, lunches have dropped by over 31,500 for the year. Breakfasts are up, due mostly to the four Provision 2 schools where all students eat at no cost.

Dr. Domokos-Bays, who came to ACPS from nearby Fairfax County 11 years ago, agrees with the overall goal of providing healthy meals, which she terms “the right thing to do.”  After arriving at ACPS, she started making changes, like adding more fruits and vegetables and changing the grains being served well ahead of the mandates, because she recognized that change was coming.

In spite of her forward thinking, the process of planning menus was not easy in Alexandria.  “We had already made many of the changes needed to meet the requirements,” says Dr. Domokos- Bays.  This meant fewer obvious changes for her customers after the new rule took hold. “But the technical process of writing compliant menus is very difficult and time consuming.”

Last spring she and her staff spent 200 hours to develop a three week cycle menu for the 13 elementary and two middle schools. (They were able to use a single K-8 menu that spans two of the three required age/grade groups.) Because of the wide variety of items available at the one high school in the district, menu planning and additional changes there were minimal.

The hardest challenge has been finding suitable whole-grain products, especially whole-grain pastas, including those offered by USDA, which have had problems with color and texture.

“We have tried every pasta on the market in large quantity and over time, and our children just will not eat it,” Dr. Domokos-Bays says. “They tell us they prefer the texture and color of ‘plain’ pasta.”
Fortunately, her students do seem accepting of brown rice and Dr. Domokos-Bays also found a good whole-grain couscous that seems popular.

There are other challenges meeting the whole-grain requirement.  Whole-grain items are much more costly than traditional bread items, although that seems to be getting better.  And there is still uncertainty about what the standard of whole-grain items is.  During a transition year, manufacturers and schools can use either 14.75 grams of grain per ounce, or 16 grams. There are also other, technical differences.

What’s been the impact of the changes? Waste and cost dominate the discussion.

“We don’t have a good baseline on waste because traditional plate waste studies are difficult and costly,” says Dr. Domokos-Bays. “We conducted studies in two elementary schools this spring, and found almost 30% food wasted.  We also took it as an opportunity to train serving staff not to automatically put an item such as bread on each tray.  Children do not want to say they don’t want something, so they grab and go.  We found that many dropped the unwanted item into the trash on their way to the table.”

“This year we are running 46%.  The additional six cents doesn’t cover that large an increase,” she says. ACPS is also concerned that it has had to take some popular items like kiwi off the menu because the district can’t afford the increased portion sizes required.

Another cost of implementing the new regs was in labor. ACPS added an extra training day at the start of the school year, at a cost of $100,000, to familiarize all employees with the new menus.  Of particular concern was ensuring that cooks and servers followed recipes, required portion sizes and understood the veggie subgroups and substitution rules.  (Teaching the new Offer vs. Served pattern is also important to ensure compliance with the six cent certification.)

The department developed a set of color posters to demonstrate appropriate portion sizes for various components and combinations needed to meet the vegetable subgroupings.

“Pictures are very important when you are dealing with a staff as diverse as ours,” says Dr. Domokos-Bays. “We have employees from 30 countries speaking a dozen different languages.”  This reflects the diversity of the district’s students, who hail from 124 countries and reflect 80 languages.

Equally concerning is the decline in participation and a la carte sales, both as it affects children accessing the healthy meals offered, and the impact it has had on the bottom line.

Again, it is difficult to parse the data to determine if the new menus are the cause of the decline, or it’s the result of other factors in the economy.

Dr. Domokos-Bays says a new POS system installed this year that lets parents monitor what their children buy may have affected a la carte sales, which dropped about 16%.

School meals are actually counter-cyclical, increasing when the economy is bad, and holding steady or declining when the economy improves.  However, this might be a small affect locally as unemployment in the area has held around 5%, half the national rate during the worst of the downturn.