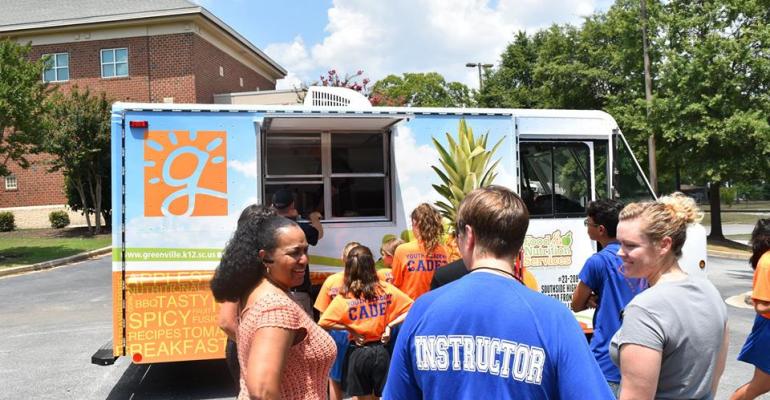 The mobile eatery debuts as a summer feeding outlet but will complement cafeteria offerings during the school year at secondary school sites.

In early July, the program rolled out—literally— its newest venture, a food truck that initially will serve as an additional summer feeding outlet for underserved areas of the district. When school begins in mid-August, it will become a roving additional dining option for middle and high schools as well as a test platform for potential new additions to the district menus and also as a special event mobile catering platform.

The truck was purchased used in January and subsequently outfitted to meet the district’s needs at a total cost of $50,000, all of which came out of the self-supporting nutrition services department funds. It made its debut July 6 at the district’s A.J. Whittenberg Elementary School with a menu that included grilled cheeseburgers, local watermelon, local peaches, mixed green salad and milk. Stops since then have included other school locations, the Center for Developmental Services in downtown Greenville and a local apartment complex that hosts a church without walls where students congregate for summer activities.

“We don’t just pull up to a neighborhood,” explains Joe Urban, director of nutrition services for Greenville County Schools. “We find a neighborhood that has a need and doesn’t have access to one of our 50 [summer] feeding sites and has a group in place already that can help get the word out.”

The goal for the truck during the summer is to hit two sites a day for lunch and at least one for breakfast, with a total of 500 to 700 meals served daily, Urban says. Running out of food is not a worry, not with a hundred full-service kitchens and their storerooms scattered around the district.

“No matter where we are in the county trying to reach students, we have a school in close proximity to us,” he notes.

Those scattered kitchens also represent the strength of the district’s school meal program.

“The majority of our meals are scratch or speed-scratch made,” Urban says. “Every Monday, Wednesday and Friday we do a scratch-made soup and salad bar as an option. On Tuesdays and Thursdays it’s a fresh fruit and veggie bar where we’re serving four options of fresh fruit and four steamed vegetables every day.”

New for this year is a mac ‘n cheese bar where students get to choose between a scratch-made creamy or spicy mac ‘n cheese base and then select toppings from among four different proteins and four steamed vegetables. That build-your-own approach is also used with a mashed potato bar and, new for this coming year, a taco bar. And these hands-on concepts are options at all school sites, not just the high schools.

Urban says a lot of the inspiration for menu choices comes from local restaurants and he’s willing to experiment. “I think we were the first school district to serve real bone-in St. Louis ribs,” he says. “This year we’re serving real smoked beef brisket and we’re able to make those things fit in the [federal] guidelines. We’re able to make just about anything work, within certain parameters.”

Of course, not everything takes off. Sushi was tried this past year but proved only “semi-successful,” Urban says.

This fall, some new recipes are expected from a recently forged partnership with celebrity chef Johnny Carino, who will engage with students in the district’s culinary arts program as a speaker and motivator and also work with Urban and his culinary team to develop potential new items for the district.

Greenville County is a diverse district with a wide range of demographics. While overall only 52 percent of the 75,000-plus enrollment qualifies for free or reduced price school meals, the number varies widely across individual school sites, from a full 100 percent to as low as 13 percent. Of the district’s 101 locations, 21 are CEP sites.

Nevertheless, the district made the commitment this school year to provide universal free breakfast to every student in every school. It has also committed to the removal of all highly processed chicken products in favor of whole-muscle chicken. Also gone is all canned fruit, with only fresh served from now on: “Our mandate to our produce dealer is that if it’s local and affordable, we need it,” Urban says.

Meanwhile, the food truck gives the program a high-profile new platform sure to resonate with kids who know what the hot trends are. So, what’s been the reaction after its first two weeks: “Utter amazement and excitement and just thrilled to have a new venue,” Urban reports.