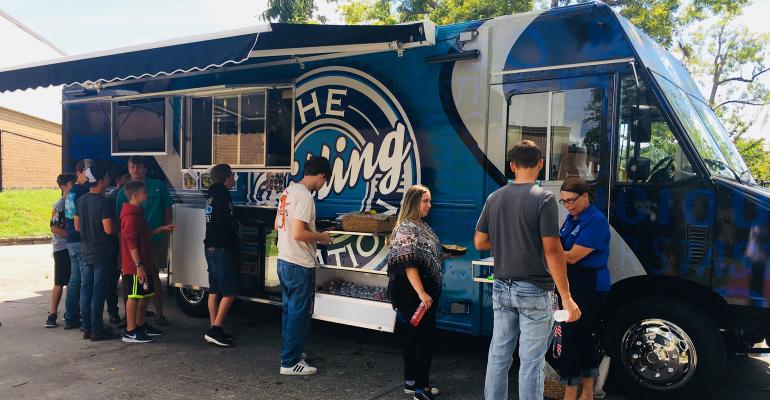 The Filling Station makes the rounds of Clay County’s seven senior high sites on a regular rotation with a menu that never looks like “cafeteria food.”

Like most school districts, Clay County in Florida has to work to keep high schoolers interested in school-provided meals. To that end, the district this past summer invested $162,000 in a new food truck that now makes the rounds of the seven district high schools on a regular rotation, serving a menu distinct and, at least visually, a cut above what is being served inside in the traditional cafeteria.

The result is a mighty popular serving platform as the truck, named The Filling Station, averages around 200 covers a day and has gone as high as 260, according to Susan Glover, director of food & nutrition services.

“They really seem to love the nachos we served early on, so we’ve kept it on the menu, along with the pulled pork cheesy fries that were also unexpectedly popular,” she notes.

A more recent popular addition is the Cowboy Burger, a hamburger outfitted with an upscale bun, topped with onion rings and barbecue sauce, and served with a side of fries.

“We’re trying to come up with things that are different, but as we are part of the National School Lunch Program, we have to follow the same standards [on the truck menu] that we do in our regular menus,” Glover says. “However, we have tried to put a spin on it to make it new and exciting and different, and they love it. They honestly don’t think they are getting cafeteria food even though it is made from the same type products we use in the regular cafeterias. We just try to incorporate some different menu ideas on the food truck, sometimes something as simple as adding onion rings and barbecue sauce to the hamburger.”

Menu ideas are derived from a number of sources, but especially from regular focus groups held at the high schools.

“We take the student feedback, then try to figure out what we can do to come up with [something workable] because we also have to make sure they will work production-wise,” Glover explains. For one thing, food has to be served quickly because of narrow lunch period time windows.

Much of the food served on the truck is cooked at one high school’s kitchen, but Glover says she also wants some production done on the truck.

“We wanted to utilize the equipment on the truck and not just have everything come from the high school,” she says, “because the smells [of cooking] from the truck are also valuable.”

Production equipment on the truck includes an oven in which fries are made fresh, as well as a flattop grill.

That latter piece of equipment right now is used mostly as a warmer to supplement the two warming cabinets: Items like the pulled pork and the rice are prepared at the high school, then put in four-inch steam table pans that the cabinet and flattop keep at temperature on the truck.

“We’re hoping that down the line we’ll be able to do more things with the flattop, like maybe sautéing onions and peppers for more of that nice cooking smell,” Glover says.

The truck is manned by three staffers, two on the vehicle to assemble and serve the food and one off the truck to operate the POS, which is hooked to the main cafeteria system.

Glover credits Clay County District Superintendent Addison Davis for the idea to get a food truck. The cost of the vehicle was paid for out of federal meals funds, as the truck represents an extension of the serving line, making it an approved expense per USDA.

The next steps will include using the truck as a mobile feeding platform next summer, but Glover would also like to see it being used in the district’s culinary education program.

However, meanwhile, the vehicle is already paying back some of the investment with customer enthusiasm and a boost in participation.

“I believe we are reaching students we otherwise would not have because there is a stereotype about cafeteria food,” Glover opines, “but when they see that food truck, it’s a whole different thing.”