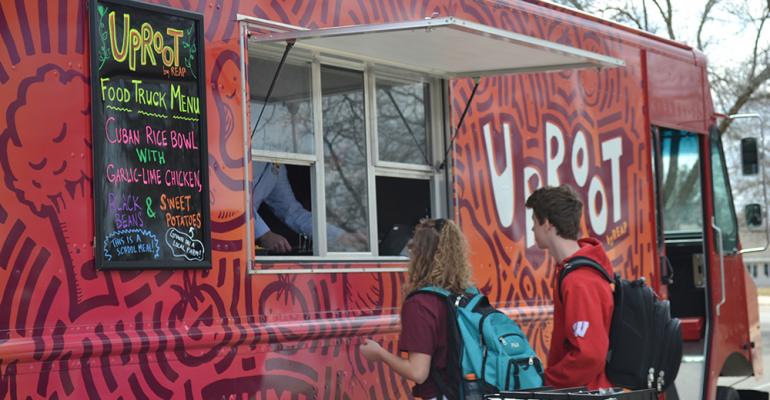 A mobile eatery with a special menu featuring locally sourced ingredients rotates through the high schools of the Madison School District in Wisconsin.

Food trucks are becoming an increasingly popular way for K-12 school districts to boost participation numbers, especially among high schoolers who traditionally have shied away from conventional cafeterias as terminally “uncool.” They are also a great way to leverage perceived trendiness to push more healthful options.

That was the thinking behind Uproot by REAP, a food truck that makes regular rounds among three district high schools in the Madison Metropolitan School District (MMSD) in Wisconsin. Uproot serves a menu of meals designed to utilize locally sourced products as much as possible, so the platform serves a twin purpose of not just enticing school meal participation but also of promoting healthy choices containing local products.

Uproot is owned not by the district but by an independent organization called REAP Food Group, which promotes farm-to-school and sustainability programs. REAP’s contract with MMSD requires that it serve a school lunch that has at least one major ingredient that is locally sourced, says REAP Executive Director Helen Sarakinos.

“We’re aiming to serve a nutritious, creative menu that appeals to older students, and that is as fresh as possible,” she adds.

The meals served from Uproot were developed by the Madison district to ensure they comply with National School Lunch Program regulations for subsidized school meals, as about half the district qualifies for free or reduced-price school meals. The truck has a POS that tracks subsidy-eligible students and takes payment from their online meal accounts for those that don’t qualify for subsidies. It does not take cash.

The truck’s food is an extra option, not a replacement for the regular school meal program as the school cafeteria remains open at each site when the truck visits. It is especially valuable because MMSD high schools have open campuses that allow students to leave at lunchtime, so the truck serves as an intercept point of service from which teens can grab a quick, healthy meal before heading out.

The menu served from the truck is unique, not a duplication of the cafeteria fare. The selections currently rotate weekly as the truck makes one stop on each successive day of the week at a different high school, so each gets to have the week’s menu item once.

“The food and nutrition staff designed the menu capitalizing on the fact that food trucks are hip and trendy,” Sarakinos observes. “The menu offerings are a chance for them to experiment with more cutting-edge recipes they don’t currently offer in the cafeteria.”

Among the entrees served on Uproot so far are a Cuban rice bowl with garlic lime chicken, sweet potatoes and black beans; a bahn mi sandwich with a side slaw; and fish tacos with an apple kohlrabi slaw.

The local products used in the dishes are identified and sourced through a partnership between MMSD and REAP called the Farm to School Project. REAP Farm to School Director Natasha Smith works closely with district staff on menu design and particularly on how to source the ingredients.

“The assets REAP really brings to this whole project are that we encourage them to look locally for some of the ingredients, that we help make connections [with local suppliers] and we help figure out how to do that within the [limits] of all the regulations they have to follow,” Sarakinos observes.

The truck itself was donated to REAP by the Emmi Roth Cheese Co. and is fully equipped with a refrigerator/freezer and production equipment like a griddle and an oven so some of the food is cooked or finished off in view of customers rather than simply being dispensed premade and prepackaged.

“The idea is that with a food truck menu you can finish off a dish or do quick touches like using the oven to roast vegetables and the griddle to heat things so kids get fresh-cooked meals,” explains Sarakinos. “That’s another piece of what’s so appealing about it.”

All cooking and serving is done by district personnel as the truck is on school grounds, but there is usually a REAP representatives onboard as well to do some sampling, answer questions and solicit feedback.

Uproot debuted April 9th and now serves up to a hundred lunches a day, depending on the site, but Sarakinos thinks that’s just the start.

“I think right now we’re just getting the system set and getting people used to it, but as we go into next school year, I think we can start to be a little more creative about the marketing.”