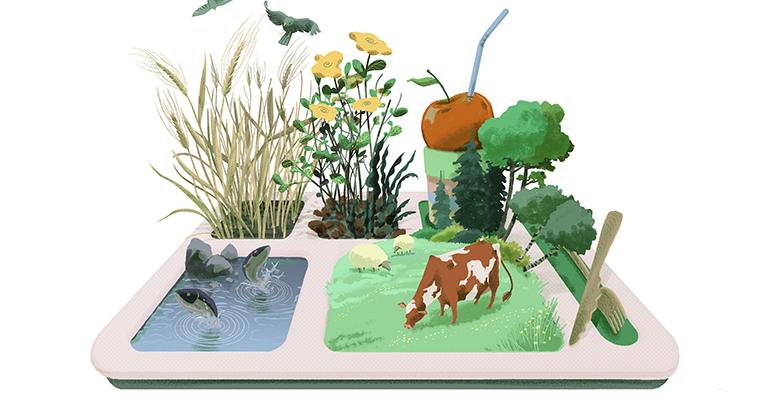 Until late last year, Daniel Giusti was the head chef at Noma in Copenhagen, which is widely considered the best restaurant in the world. Today, he can be found driving around parts of the United States sampling school food.

Giusti’s next project is not a restaurant. It’s a foodservice company called Brigaid that aims to provide a new model for school food in the US. It’s an ambitious project, but Giusti thinks his prior experience at fast-paced, high-volume restaurants will help him succeed.

“Running a restaurant is such a difficult thing to make the numbers work. There are a lot of people out there who are very clever, very innovative and trying to think differently on how they can make these things work. And I feel like more of that thinking needs to be put into school foodservice as well,” Giusti says.

Giusti plans to take what he has learned in the restaurant industry and focus it toward school food, but first he needs to choose a school to partner with. For the past few weeks, he has been touring schools, mostly on the East Coast, as he tries to decide in which single school or a small school district to launch Brigaid. He’s looking for a school or district that’s open to change, and where Brigaid can make a big impact.

“I want to feed a lot of people,” Giusti says. “There’s two ways to look at it. There’s one where you’re serving people food where you’re creating this exceptional experience, and they’re tasting things they’ve never tasted before, and it's this once-in-a-lifetime thing. And there’s this other side to cooking, where you’re feeding people on a daily basis, and I like that idea. That’s where I fit in.”

As he visits schools, Giusti is developing an idea of what he wants to serve and doesn't.

Whole fruit, a popular snack for students strikes Giusti as problematic. “I’ve been sitting in snack time with a bunch of kids this week watching these little kids eat this apple they couldn’t even get halfway through it,” he says.

He also takes aim at cold cereal served daily in classrooms. "You have kids that eat cereal five days a week from kindergarten to seniors in high school," Giusti says. "I’m kind of a firm believer that as someone who is providing school food, you are essentially teaching kids what to eat." As such, Giusti would like to teach students about other breakfast options.

Giusti says he’s heard a lot of complaints from students regarding the kid-favorite cheese pizza. When schools use the low-fat, low-sodium cheese that adheres to the USDA guidelines, the cheese burns before it melts. And students hate it, he says. “I was talking to high school kids yesterday. I told them, ‘well this is the deal, they have to use this particular type of cheese because of USDA guidelines, so what would you do?’ And they were like, ‘I wouldn’t serve pizza then,’” he recalls. “You tell me to serve cheese pizza, and the cheese I had didn’t melt, I wouldn’t serve cheese pizza. So it’s a matter of understanding what you can do and what products are out there.”

Giusti realizes that many of his decisions regarding how and what to serve will be dictated by the USDA and by the average lunch reimbursement rate of $3.07, a far cry from the two hundred-plus a head charged at Noma. “The price point is insane,” he admits. But he’s not deterred.

“I think there are various ways to generate extra revenue,” he says. “When you design a foodservice establishment, you would never design it with a kitchen that was only operating for two hours,” as many school kitchens do. Giusti says he’ll look for ways to maximize output in order to spend more money on ingredients and paying staff.

“The way I see it, it’s a kitchen. There’s no reason that a kitchen in a school could technically not produce the same quality of food that a kitchen in a restaurant does down the street,” he says. “Obviously, in the framework of the school meals they have to adhere to USDA guidelines, but after that, is there any reason that you couldn’t produce meals that could be sold or that could be catering to businesses?” Giusti imagines selling goods and take-home meal kits could be part of Brigaid’s business plan. “It’s more about finding the right model that fits various communities.”

Brigaid will be a for-profit business, Giusti says, and the company will take on outside investments initially.

Bridaid has garnered Giusti praise from many in and out of the restaurant industry including his former boss. “What Dan is doing is bold,” said René Redzepi, chef-patron of Noma, in a press release. “The man has every opportunity to open a successful restaurant anywhere in the world but has instead chosen to pursue something as challenging as improving institutional food. As a father and cook, I can only respect that.”

Giusti knows his ambitious plans won’t be easy, and he’s faced his fair share of skepticism, too, from some in the school nutrition industry, he says. He knows that he is the latest in a long line of chefs who come from the restaurant industry with the goal of changing school food, to varied levels of success.

“I think it’s very important that these people, before making assumptions [about me], do their research as well. I come from a very high-volume background,” which Giusti believes will help him succeed in foodservice. “There’s nothing I can do except prove them wrong.”