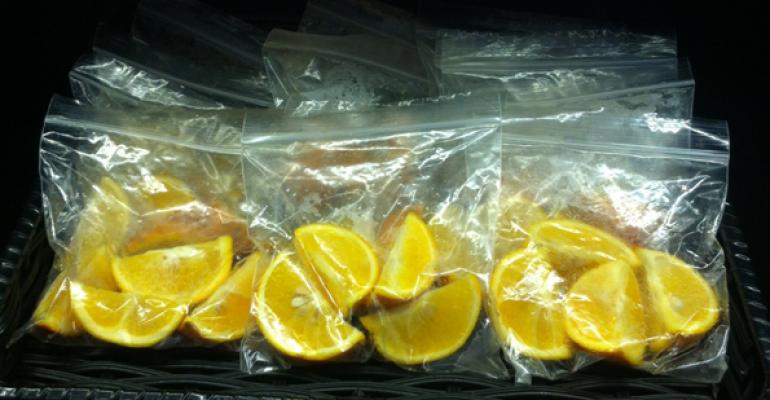 Getting Kids to Eat More Fruit: A Simple Solution

At a Florida high school, presentation made all the difference, resulting in a big spike in the number of students choosing oranges.

When a piece of fruit is sliced, kids are more likely to choose and eat it. That’s a concept that’s been tested and proven by Cornell University’s Food and Brand Lab. One K-12 operator recently learned about this and decided to put it to the test at Forest Hill High School in West Palm Beach, FL. Sure enough, it worked like a charm.

So why don’t kids like to take a whole orange or apple? A study by Cornell University’s Food and Brand Lab researchers Brian Wansink, David Just, Andrew Hanks, and Laura Smith introduced the question: “Could, perhaps, increasing the convenience of fruit increase consumption?”

The problem uncovered in the Cornell study is this: whole fruits are unwieldy in the cafeteria—turning off image-conscious teens and those with braces. This is why some students will take the whole fruit but then decide not to eat it, resulting in food waste.

When apples were sliced up using fruit slicers (an initial investment of around $200), the results at six middle schools were amazing: apple sales in schools with the slicers increased by 71 percent compared to control schools. Students were selecting and consuming more fruit.

This study was part of the learning experience at the Getting Back to Your Roots K-12 culinary symposium earlier this year, where Cornell’s Adam Brumberg was a presenter.

“A manager at Forest Hill High School told me that pre-packaged bags of sliced apples are selling well, but they’re 50 cents per bag,” Freedman says. “Meanwhile, we were at the peak of Florida orange season, with oranges going for about 18 cents per orange.”

So Freedman found a fruit slicer hidden away in storage and brought it to the high school. With a little bit more labor, individual sliced fruit bags could be made in-house. Clear plastic bags make for a nice, clean presentation and the oranges are sliced all the way through, easy to bite into.

Two weeks later, the number of students who selected fruit had increased by 18.4 percent, Freedman says.

“It was a super simple thing that we can do, and just apply this simple concept,” he adds. “It really does work.”