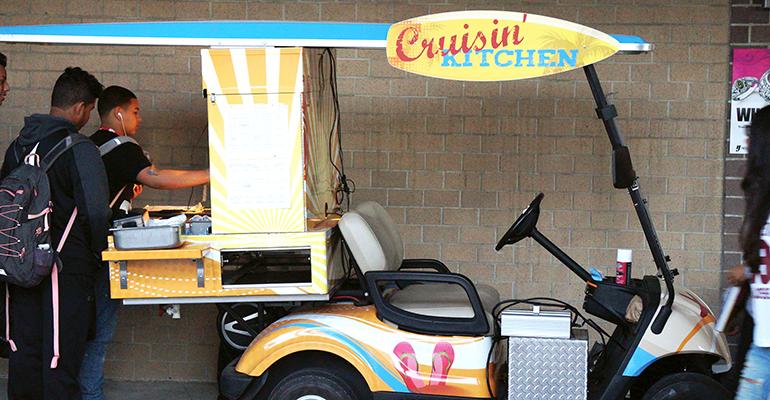 Orange County Public Schools
Modified golf carts have served as a prototype for a way to get supper meals to OCPS students who may not be near a cafeteria after classes end.
News & Trends>K-12 Schools

Vehicles deliver after-school meals to students engaging in outdoor activities away from the cafeterias at Orange County Public Schools.

“Go where the customers are!” is one of the venerable truisms of business. Orange County Public Schools (OCPS) in Florida has taken that saying to heart by deploying motorized golf carts to bring supper meals to football players, band members and other students engaged in after-school activities away from school buildings.

The result has been a boom in after-school meal participation. For example, one high school’s average daily supper counts soared from around 120 to 600 once a cart was deployed.

The program began as a way to solve a problem the meal program had in bringing suppers to students engaged in after-school organized activities such as football practice and band rehearsals that often took place a distance from school buildings.

While OCPS already was using mobile pushcarts to augment its breakfast and lunch programs, these were impractical for the supper program because of the distances they would have to be moved while fully loaded.

So two years ago, three golf carts the district owned but wasn’t really using were drafted to potentially solve the problem. These were deployed at three separate sites to boost after-school meal programs while also operating at earlier meal periods as alternate service points.

The motorization is key, says Edwin Torres-Santiago, manager of special projects for the district.

“The pushcarts are too heavy for employees to get across the campuses at our high schools and middle schools,” he explains. “The [motorized] golf carts give our staff easy mobility so they can get them to where we need them, even if it’s at the other side of a campus.” Supper meals off the motorized carts consist of separate packaged components students can combine to their liking and which together constitute a reimbursable meal.

The three original modified golf carts have been so successful at boosting supper counts that OCPS has now purchased 15 brand-new carts that are not only larger with greater capacity but also have been specifically customized to include features such as two serving lines on each unit to facilitate transaction turnover.

“They will be equipped with batteries that will power them for two to three hours,” notes Mark Watson, director of food & nutrition services for OCPS, “so there’s no need for outlets. Also, we got a grant to equip nine of them with solar panels to take advantage of our Florida sunshine.”

“That is one of the biggest bang-for-the-buck factors—not having to go back to the cafeteria to restock,” observes Lora Gilbert, senior director of food & nutrition services.

During the breakfast and lunch periods, the carts can set up at vehicle drop-off points in the morning and in courtyards at lunchtime to take advantage of student traffic patterns at those times. All of the units are equipped with wireless POS that allows meals to be logged for purposes of federal reimbursement.

The breakfast and lunch menus—which consist exclusively of reimbursable meals—replicate what is on the cafeteria menu that day at each site. Each complete meal is bundled and pre-packaged in the site’s kitchen and simply dispensed from the carts.

Supper is slightly different in that while the meal components are pre-packaged, students can pick the combination of items they want to complete a full reimbursable meal.

The district spent around $6,000 to modify the three original golf carts to fit the meal program’s needs. The 15 new carts each cost around $18,000, including both the cost of the cart and its modification with the serving lines, holding equipment, etc.

In terms of building participation, the cost has been more than worth it, says everyone involved.

“Every time you see that cart, there’s a line,” laughs Torres-Santiago.

“It’s so much more acceptable sometimes than going into the cafeteria,” Gilbert adds.