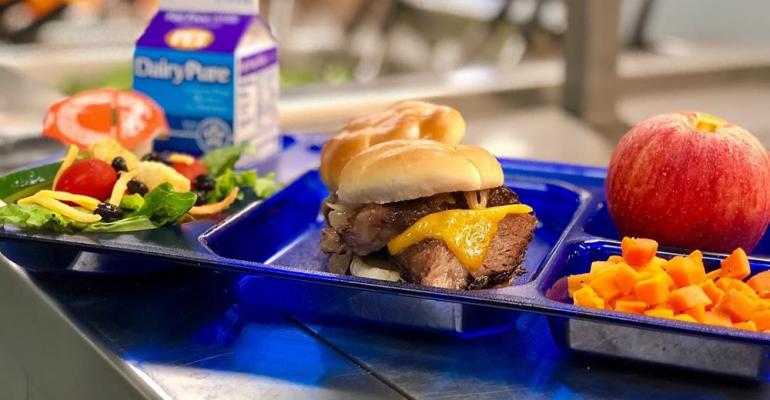 In this tale of two school districts—Greenville and Gwinnett—two sandwiches will be swapped for one fun school lunch this December. The two district’s directors, Karen Hallford of Gwinnett County (Ga.) Public Schools and Joe Urban of Greenville County (S.C.) Schools, were fast friends even before they met at a conference a few years ago. Through social media, they formed a mutual fan club of their respective menu items, with a dash of healthy competition.

“They keep us on our game, and we keep them on their game,” Hallford says, noting that the two districts—two of the largest in the nation—have a lot in common, and even more to share.

Related: How K-12 school meal programs are getting in on chicken sandwich wars

“These two districts are very friendly and very similar in size and demographics, and we’re both a little competitive in nature,” Urban says. 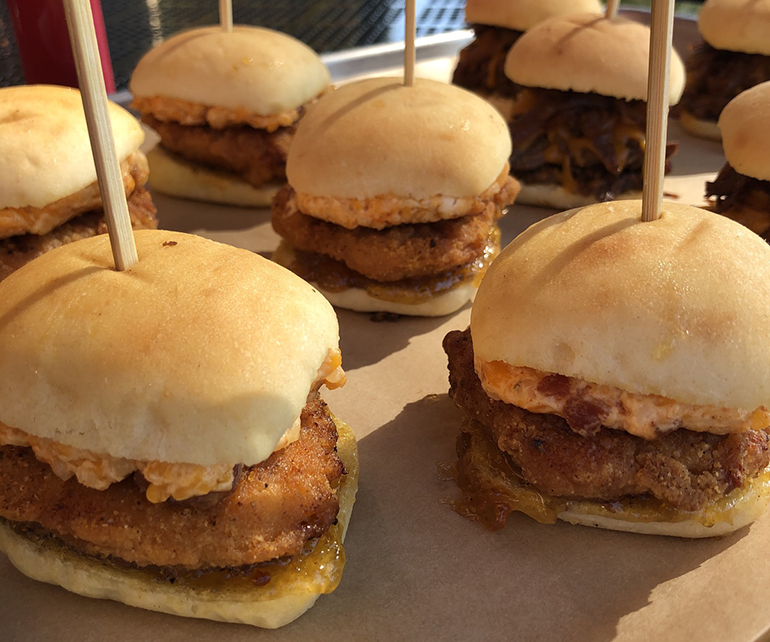 Gwinnett County (Ga.) Public Schools’ chicken slider, which will be used in the collaborative swap, features a chicken patty with a signature blend of spices, housemade pimento cheese, bacon and peach-jalapeno jam.

That competitive element is beneficial to the kids eating the food, as it spurs each district to keep coming up with on-trend items. “A lot of times I’ll meet with my team and say, ‘They’ve got us,’ and show them an awesome menu item from Gwinnett,” Urban says.

That happened recently when Urban scrolled through Gwinnett’s social media and spotted “some sliders that looked absolutely ridiculous! They looked really, really delicious and I knew our kids would love them,” Urban says, “so I reached out to Karen and said we should pair up and switch sliders. That’s how it started.”

Those ridiculously good chicken sliders from Gwinnett are served on yeast rolls, “which we think is very important in the South,” Hallford says, “to have a good yeast roll.” The rolls are the base for crispy chicken filets with a signature spice blend (15 herbs and spices) with housemade pimento cheese, peach-jalapeno jam and a bit of bacon. “It’s layered with flavors,” Hallford says.

The slider making the swap from Greenville is a braised short rib slider with caramelized onions and cheddar (also on a yeast roll, y’all!), an example of Greenville’s partnership with Certified Angus Beef. Since short ribs are time-consuming and labor-intensive, Greenville uses a premade, cooked and shredded short rib product, which Gwinnett is getting delivered from the same vendor to use in the swap.

Over the last few weeks, kitchen teams at one school from each district have been perfecting the new slider recipes.

Both directors feel that collaborations like sandwich swap and sharing school lunch successes on social media benefits other districts, as well, even if they are smaller and with less resources than the two mega districts.

“It helps our community understand school food done right…we have more resources; but even though we have chefs who develop recipes, in the end, we have to bring something down to the most basic elements because we don’t have a chef in every school,” Urban says. “It’s replicable anywhere.”