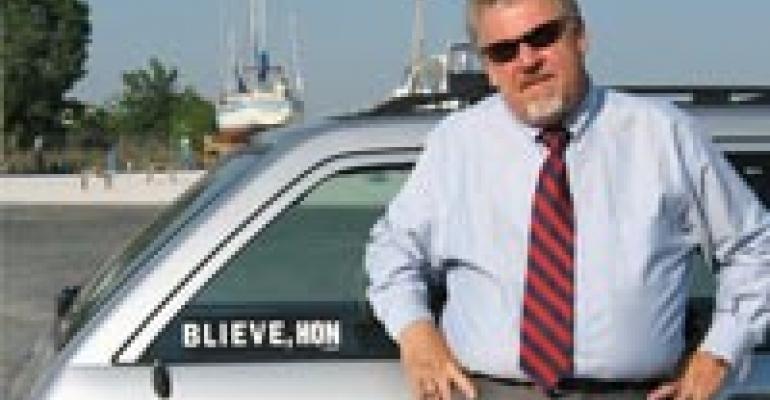 Baltimore's new school nutrition chief is a successful chef on a mission.

Anthony Geraci grew up on the wrong side of the tracks in New Orleans, but he parlayed his culinary talent into success as a commercial restaurateur and chef — in foodie hotbed Northern California, no less!

Today, he is nowhere near the Bay Area, either figuratively or literally. He is clear across the country, running not a trendy restaurant but the foodservice program for Baltimore City Schools.

His most noteworthy initiative to date: Great Kids Farm, an actual 33-acre organic farm/greenhouse in nearby Catonsville, MD, now owned by his department (it was a condition of his taking the job). Geraci's plans for Great Kids includes using it to educate students about how real food is grown, as a source of seedlings for school gardens, as a test lab for potential new additions to the school menus and even as a supplier to three school-based restaurants managed and operated by district students. He also uses the farm to generate extra revenues by selling some of its product to area restaurants.

Yes, Geraci is an idealist, but one with dirt under his nails. Besides his school-of-hard-knocks upbringing and struggles to make a success of himself — as a young man he spent time cooking on cargo ships among other odd jobs — he has already managed a successful school nutrition program.

As foodservice director for Contoocook County, NH, schools for five years, he introduced from-scratch meals, worked with the University of New Hampshire to launch a farm-to-school program to bring local product to the school kitchens and pulled the deficit-saddled program into the black.

“Growing up, I was fortunate that New Orleans is a city that still practices European style apprenticeship programs. I worked under really amazing chefs. In between throwing pots and pans at me they sort of recognized that while I was a knucklehead I was a knucklehead with talent and they would nurture that talent.

My cargo ship experience was brief but it taught me that it's about mise en place — you need to be prepared. It prepared me to always have a plan B, C and D.

I've been an entrepreneur all my life. I ran a nightclub above Bourbon Street and opened the first real deal Creole restaurant in the Bay Area. We were one of the first wine bar concepts there and I started partnering with local vineyards like J. Lohr, Fetzer and Bonny Doon in the early 80s, before they were famous. I had a private dining room and those guys needed a place to do wine tastings. I also started pairing local foods with their local wines and it was a great success story.

I had spent a lot of time pooh-poohing why schools don't take advantage of available programs and why they don't build relationships with local suppliers. So when my local district asked me to take over their program, my friends challenged me, ‘You know, Tony, you talk a lot of smack. Well, here's your opportunity to put up or shut up.’

I recently wrote the first RFP in Maryland history calling for only Maryland grown fruits and vegetables to be purchased by the Baltimore City School System. I have 85,000 kids here, so when I buy peaches or apples, I buy 40,000 pounds at a time. I found that Maryland farms are abundant producers. This state is pretty rural.

When I first saw the place [Great Kids Farm] I imagined kids laughing and planting things and I thought, ‘Man this needs to be a living, breathing, working farm again!’ So that was kind of the carrot to get me to take this job. They said, ‘We'll give you that farm and you can do what you need to do with it.’ That was the deal sealer for me.

I learned about vertical integration from Don Tyson and Tyson Foods. The company not only raises chickens but also their feed. It controls the process from start to finish and they've been damn successful, so I though why not incorporate those business practices and philosophies into this? It's Business 101 and makes a lot of sense.

I found my voice as a chef. Had I not heard that voice, my life would have been very different. I'm convinced that our hallways are full of young Julia Childs and James Beards and Emerils who are just waiting for an opportunity to hear that voice, which offers a different role model than the guy who rolls into the neighborhood in a Lexus with a trunkful of cocaine. That story ends the same way every time in every city.