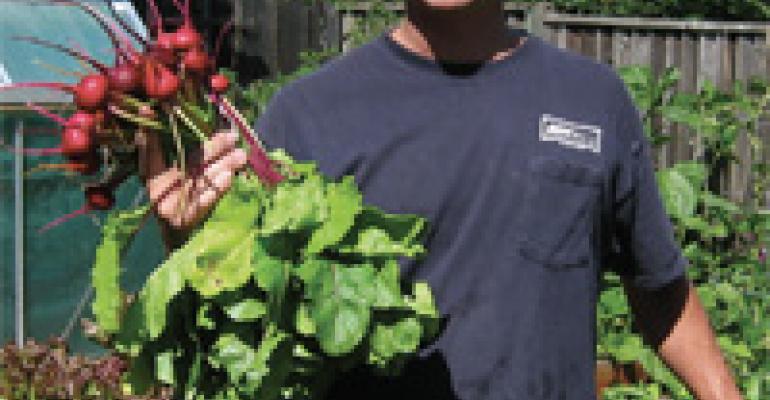 Guest Chef: The "Other" Chef Jamie

This one's not on TV, but he's just as committed to improving school meals.

British celebrity chef Jamie Oliver has been making headlines in recent months through his televised efforts to reform the school nutrition operations in Huntington, WV. What Oliver is doing on national TV, another Jamie is doing in more anonymity for the Santa Cruz (CA) City Schools.

Jamie Smith doesn't have a reality TV show but he is a talented chef in his own right, and like Jamie Oliver, he has decided to take those talents to the school foodservice world hoping to make a difference. A graduate of the French Culinary Institute in New York, he spent much of his previous career in commercial restaurants in New York and San Francisco, including a stint running his own successful place.

He later joined Bon Appetit Management Co. and oversaw its dining operation at Cisco Systems before leaving to join the self-operated dining services at the University of California at Santa Cruz as executive chef. While there, he won a regional gold medal in the NACUFS Culinary Competition.

Last summer, he made yet another segment switch when he joined Santa Cruz Schools as executive chef. His mandate: to convert the dining operation, which had been relying on pre-made processed choices, to a scratch-based system that menus dishes made with fresh ingredients.

It's a tough assignment made tougher by the lack of production equipment at the sites, not to mention the ingrained habits of his customer base. But, unlike the other Jamie, he's in it for the long haul.

How much have you changed the menu?

Pretty drastically. We don't have any fried foods — no chicken nuggets, no corn dogs…

What was the reaction to that?

Similar to what Jamie Oliver experienced. To get the kids more comfortable with what I was doing, I took a small portable kitchen to each of the elementary schools and did free tastings after school so parents could see it too. That went well — hey, it's free food. But then, when the same things were served for lunch, it didn't go over nearly as well. It seems like there's a muscle memory among kids that makes them go for the junk food. Changing their minds takes time.

How much staff training did you have to do?

They can cook, but it's been a while, so we're still working on modern techniques, modern HACCP standards, modern food handling practices. In general the problem is that they haven't had to handle real food for a very long time. If you're just reheating a frozen burrito, it's entirely a different thing than making one completely from scratch.

What have been some of your most popular menu additions?

Different food bars have been successful. We'll do a taco bowl bar with our own refried beans and lean turkey spiced up to make taco meat. We also have a chicken mole bar with fresh tortillas and Spanish beans and rice. There's also wrap day with different flavored tortilla wraps and we make a bunch of different cold protein salads like chicken, tuna, hummus and three-bean so they can serve themselves.

You make your own salsa?

Yeah. It's funny, I make a lot of things from USDA canned spaghetti sauce because it's so bland. We make it into mole and into enchilada sauce using different spices and dried chiles. We also make vegetarian chili with three different beans, some corn and USDA spaghetti sauce. I even put it in our sweet and sour sauce in place of ketchup for a teriyaki dish.

What brought you to school foodservice from UC-Santa Cruz?

It seemed like a natural fit. At UCSC, we'd made significant progress in local purchasing and sustainable practices. It would have been fun to stay on that ride, but I saw this opportunity and thought I could bring the schools to another level. Also, I have kids, and the breaks in the school schedule mimic their breaks, so that gives me quality time with them.