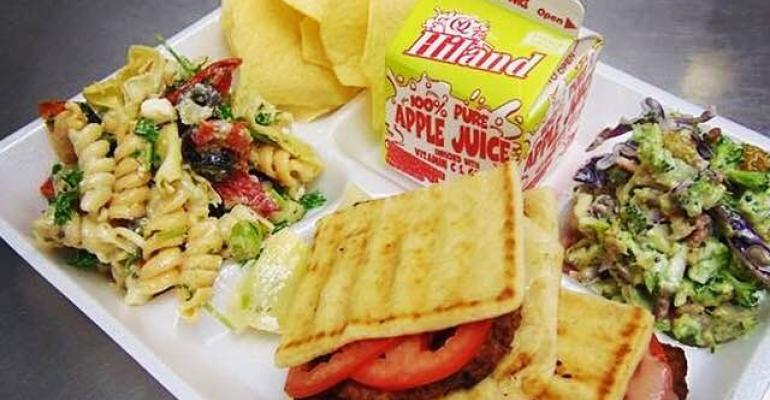 Two years ago, when Eli Huff was brought on to help Bixby Public Schools in Oklahoma, the district was struggling with new USDA school food regulations. Huff and his company Salt Food Group helped the district to thrive under the new regulations and to start thinking and marketing more like a restaurant.

“The hardest thing is to convince these 20- to 30-year veterans of school foodservice that the concept behind the USDA regulations is a good one,” Huff says. “It’s doable; it just takes a little bit more work and a little bit of education from the culinary side.”

Salt Food Group (SFG) works on both the design and layout of school kitchens as well as the meals they serve. Huff previous worked as a chef and operated his own restaurant, which he says helped prepare him to tackle both sides of school food.

“There’s the management side where we have got a full-time nutritionist,” says Huff describing his company. “We write menus and recipes, and we train the staff and we help the director with everything from equipment to regulations and all the free and reduced [meal] stuff. Then the other side is the design side where we actually do the schematic CADD (computer-aided design and drafting) layouts for the architects and the districts. Those two combined is a rarity in our industry.”

On the design side, Huff builds school cafeterias that are more conducive to real cooking, not heat and serve. At Bixby he’s working on creating a commissary kitchen. He also likes to create mini restaurants. In the Bixby high school, he created the Spartan Deli and Pi2, which serves paninis and pizza. These mini restaurants encourage high school students who have an open campus to dine at school.

SFG is also working on a Pizza Lab concept, which will be built in Bixby's new 9th grade center and the elementary schools. The lab will have an open kitchen where students can watch their pizzas being made on a conveyor pizza oven.

As for the meal side of SFG’s work, Huff moved Bixby schools to what he calls “lunchbox cuisine.” SFG has developed over 200 USDA-approved recipes “that looks and tastes like cuisine that you would get in a restaurant,” he says. Meals include flame-grilled chipotle chicken and chipotle mac and cheese made using real chipotles, bolognese made with fresh ground pork and beef and pulled pork sandwiches (SFG has installed smokers in a few of the district's schools).

The schools make these dishes and stay on budget by implementing practices common in restaurants, Huff says. To help implement these practices SFG has brought in culinary school interns to work in the schools; many of them plan to stay on after their internships end. SFG has taught kitchen staff to reuse food in creative ways. Chicken nuggets that weren’t touched the day before can be used in a Buffalo wrap, for example. SFG also taught staff to use every scrap of vegetable by making stocks. Premade stocks are expensive and full of sodium, Huff says. “It was almost like going back to culinary school 101,” he says.

Huff also introduced Bixby schools to local farms. Scissortail, a local vertical farm, has been able to supply the schools with butterhead lettuce, red romaine lettuce, strawberries and herbs year-round because it’s an indoor hydroponic farm. “The consistency of the tower (farming) is really what’s appealing to schools,” Huff says.

All of these changes cost money, of course, and like many districts Bixby is going through a budget crisis. Huff was able to have videos created to market the school food program, which where used to help pass a bond for school food, new cafeterias and other projects.

The idea for these marketing videos started last year when Huff met a documentary filmmaker who was interested in producing a feature on the pros and cons of the USDA school food guidelines. To sell his feature concept, the filmmaker needed samples videos. Huff worked with the school’s film teacher who had students shoot the school food staff at work, the construction sites for new cafeterias and the farms where the schools get some of their produce.

Although the documentary is still being considered, the videos had another use as well. The superintendent of schools used videos to help sell the school bond. And the bond passed.

The videos are now part of how SFG markets Bixby’s school food to parents and students to help increase engagement and participation. SFG has also created a Bixby school Twitter feed and is working on a Facebook page. "We really like to market almost like you would for a restaurant but in K-12 setting," Huff says.

The videos have also inspirited the school food staff who enjoyed being interviewed by students. “At the end of the day that’s the most important thing, that the [staff] is engaged and feel self-worth,” Huff says. “That goes a long way when you’re asking them to do all this work.”