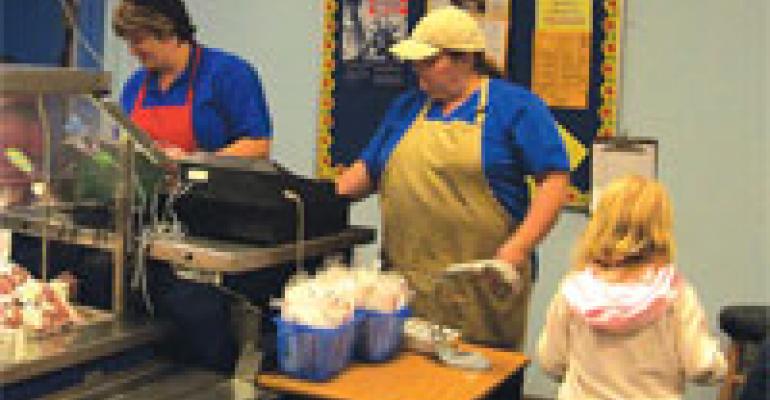 In the past three years, Hernando County (FL) Food & Nutrition Services has boosted breakfast and lunch participation significantly thanks to a number of menu and operational changes.

In K-8, the biggest success has come with the introduction of a grab and go breakfast program that makes it much easier to eat a morning meal at school. Previously, children only had a few minutes to eat breakfast, so few did.

“The buses would dump off 500 or so kids five minutes before the bell, and the expectation was that we could feed them in five minutes, which wasn't going to happen,” says Nutrition Services Director Lori Drenth, RD.

Breakfast participation in the high schools also grew thanks to changes in school policies and a simplified menu approach that honed the choices down to the seven most popular items.

Meanwhile, high school lunch participation bloomed thanks to almost the opposite strategy: an expansion of choices in a new food court style setting that streamlined wait times.

The breakfast program in the elementary and middle schools produced the most dramatic change, however.

The program began at one middle school where breakfasts were averaging around 200 a day in the cafeteria. With the introduction of the grab and go program three years ago, the daily count has risen to an average of 450 today.

There are two choices daily, one hot and one cold (usually a cereal), rotated on a one-week cycle. The choices are determined using data collected at the register.

“We itemize every item on every tray, and that helps track what students are eating, or at least picking up,” explains Drenth. “Itemization helped us identify the breakfast items they like, and it led us to ask ourselves, why are we menuing items that they don't necessarily want instead of we just going with the things they like?”

Things they like at breakfast include hot selections like chicken and biscuits, breakfast pizza and sausage biscuits. To keep the menu rotation fresh, new items are occasionally added to the rotation to test their appeal.

Drenth acknowledges that bringing food into classrooms raises some sanitation issues. “Mess is a concern,” she admits, “but they're kids. While that is a downside, the advantages, in terms of fewer behavior problems and raised academic performance more than make up for it.”

To increase breakfast participation in its four high schools, Hernando County made changes in both the menu and in scheduling. One big obstacle was school policies that prevented students from coming onto campus until shortly before the first bell because of security concerns.

Drenth worked with the schools to adjust staffing policies to allow earlier access. Meanwhile, she went to work on the menu.

“I copied what our neighbor Sumter County does,” Denth says, “which is to serve the same seven items every day instead of serving on a cycle. That allows enough variety while still keeping the favorites on the menu all the time.”

To determine the seven choices she would menu, Drenth again went to her itemization data. It showed that the high schoolers especially liked hand-held variations on traditional hot breakfast favorites, items like French toast or pancakes-and-sausage mounted on sticks.

Since the change, participation has shot up some 50 percent. One high school, which was only serving a couple dozen breakfasts a day, now serves 250. While overall district participation is only 26 percent, that is affected by minimal counts at schools in some of the county's more affluent areas, where start times are often as late as 9 am, Drenth explains.

Lunch at high schools was even more of a challenge, so Drenth expanded the choices to some 20 a day in exchange for ending open campus policies (“I told them that if I was going to make these changes, I needed the students on campus”).

Standby favorites like pizza, burgers, deli sandwiches and wraps are now available daily, mixed with popular hot entrees (Italian pasta, chicken fajita, nachos, seafood basket) rotated on a two-week cycle. The menu overhaul coincided with a major capital project that completely refurbished two of the older cafeterias and allowed conversion to food court designs at all but one site (which still serves the same menu as the others).

Since the changes, lunch participation has grown about 25 percent at the high schools.