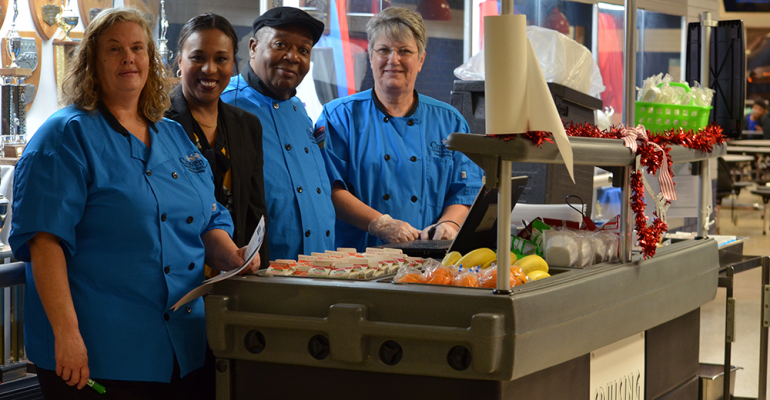 West Craven High saw morning meal participation escalate from less than a hundred to 450 plus after starting a program that lets students purchase from multiple mobile outlets around the school after the first period.

West Craven High School in North Carolina had a breakfast participation problem. The school, with an enrollment of some 920, on many days saw fewer than 50 morning meals sold, largely because many students only got to school just before morning bell and had no time to go to the cafeteria, even if they were hungry that early.

Now, breakfast counts average around 450 and often break the 500 mark when there’s something especially appealing on the day’s menu. What has changed?

Two things—expanding the service window and the delivery method, as beginning last fall the school rolled out multiple kiosk carts to different parts of the building in the 15-minute window after the first class period of the day.

The idea for the program came from West Craven High School Principal Tabari Wallace, says Lauren Weyand, school nutrition director for Craven County Schools. Wallace is an innovative-minded administrator who was named North Carolina Principal of the Year last May.

“He came up with the idea while working with No Kid Hungry,” Weyand recalls. “He then came to me and pitched the idea and I jumped on board.”

To implement the program, the school purchased four carts, initially deploying two a day, but it now sets out a varying number based on the day, the weather (one of the carts sets up outside when weather permits) and how popular that morning’s menu is likely to be.

“The kids know where each of the carts is stationed and you usually see the same kids going to the same carts each day,” Weyand offers.

The carts only set up in the break between the first and second class periods to take advantage of the typical teenager’s growing hunger as the morning progresses. Students can also get breakfast in the cafeteria at that time as well as before school begins.

The carts offer a hot selection each day based on a three-week menu cycle. These are usually the most popular item of the several being served in the cafeteria that day.

The hot items sold from the kiosks range from egg/ham/cheese breakfast burritos and chicken or sausage biscuits to grits, sausage or egg/cheese croissants and breakfast pizzas. Also available every day are cold options like whole-grain Pop Tarts, yogurt parfaits and various cereals, plus milk and 100% fruit juice.

All the breakfasts are full meals meeting federal requirements for reimbursement. About 55% of the school’s enrollment qualifies for subsidized or free meals and each student checks out at the kiosk’s POS by entering a student ID code.

Among the changes brought about by the success of the kiosk program is a need for more pre-packaged items, as packaging the number of items being sold became too labor-intensive, Weyand says. Cutting up enough fruit—which is the way most students prefer it—was especially problematic, she adds.

“[Kitchen staff] would spend forever to put them in bags and seal the bags,” she explains. Now she sources cut fruit that’s already packaged even though it is significantly more expensive than whole fruit.

More labor is also required to man the kiosks as well as the two cafeteria lines, but that increased labor cost, as well as the purchase cost of the kiosk units and the increased procurement cost associated with buying more pre-packaged food items is balanced by the significantly increased revenues from the boost in breakfast sales.

Three of the kiosks are also set out at lunchtime to serve students who qualify for the school’s “power hour” lunch privilege, which is an extra half hour of lunch offered to students who maintain a certain grade point average (students not meeting the threshold have to go to remediation classes in the second half hour of the lunch period). The carts serve two of the three of the day’s entrée offerings, but unlike with the huge increase in breakfast counts, the use of the kiosks at lunch hasn’t really impacted lunch participation, Weyand says.

The success of the program has prompted Craven County Schools to plan to implement the after-the-bell-breakfast kiosk program at its two other district high schools this fall.