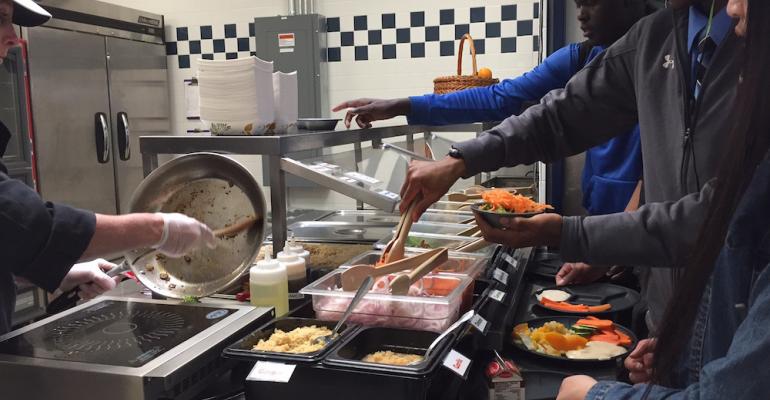 Students at Burlington High School can customize everything from sandwiches and burritos to pasta and stir-fry depending on the day of the week.

In the lunchroom at Burlington High School (BHS), students are lining up as much as 10 minutes early thanks to a new made-to-order program that allows them to customize their meal. The station, which faces the café in an open kitchen-type format, features stir-fry, burritos or a pasta bar depending on the day of the week.

Launched at the beginning of the 2015-2016 school year, the new made-to-order station complements two other lines at BHS. One serves traditional, plated lunches, while the other serves customizable deli sandwiches. All meals include a full salad bar as well as soup, so students have plenty of access to fresh fruits and vegetables. And all are reimbursable.

“The cost to launch the made-to-order program was only a couple hundred dollars,” says Doug Davis, director of food service for Burlington School Food Project. “We had to buy a few pans and induction burners. We then had to rearrange the kitchen to accommodate the setup. Outside of that it was really just planning, training and prepping. [Executive Chef] Pat [Teague] really did her homework and figured out how we could start it and make it a success.”

The made-to-order station features an assembly line of containers filled with fresh vegetables and tongs that ends with a cook who puts the finishing touches on the student’s dish.

“Success comes down to prep,” says Teague, who trained five additional cooks so that there’s always someone available who can run the station when she can’t be there. “We go through a lot more vegetables than we did before, so we had to designate a runner to replenish the line as things run low.”

Since they launched, participation and vegetable consumption have increased with stir-fry topping out as the most popular made-to-order meal.

“Students can choose between 12 different vegetables ranging from shredded carrots and mushrooms to broccoli and peppers,” Teague says. “After they’ve selected the vegetables they want, they hand their bowl over to a cook who sautés it quickly with a small amount of vegetable oil. They then get to choose between brown rice or lo mein, which we plate for them and top with the stir-fried vegetables.”

Finally, the student chooses between three hot proteins, which are held in a steam table beside the induction burner: shrimp, chicken or tofu. Once the student chooses his protein, the cook serves two ounces in a separate container so there is no risk of cross-contamination.

The biggest challenge in getting the program off the ground, according to Teagan, was wrapping their minds around the time it would take to prepare each meal a la minute. Once they were able to push past that, the rest was simple.

“It takes 39 seconds from the time a student hands over the bowl of vegetables to the time we hand back their plated meal,” Teague says.

“There’s been a ripple effect from the stir-fry and burrito bars that lead to the customizable macaroni Monday bar,” Davis says. “Overall participation is up this year and I think this is why.”

As a result of the success of the program, Burlington is looking at piloting the program in the middle school later this year or early next year.