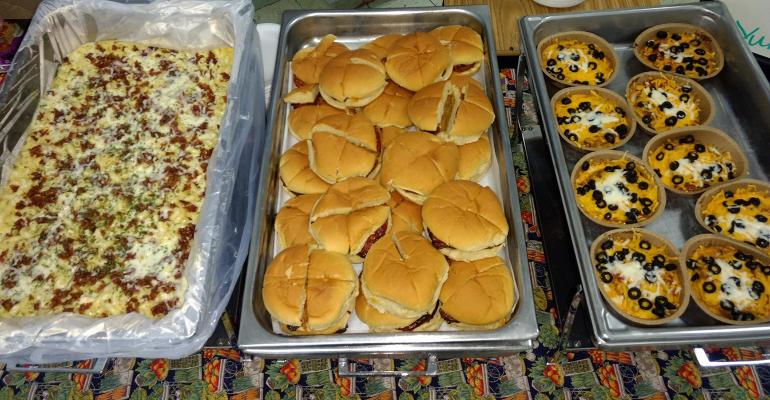 How to get taste test success for K12

One school director shares secrets of getting kids to try new food and collecting the feedback and data that makes taste testing worthwhile.

First, try a single chickpea. Then move onto hummus. Then try hummus on healthier nachos. That’s how Warren first introduced students to hummus during a summer feeding program. Now it’s a popular menu item, part of “neato nachos” with hummus, salsa, cheese and whole-grain chips, a protein and fiber-rich lunch that kids love.

“If we would’ve just put hummus cups on the line, kids would’ve said, ‘Ew, what’s this? I’m not trying this,’” Warren says. “But since they had already tried it in a fun, safe way that’s exploratory, they were more likely to try it.”

Recently, three new items were introduced at the high school: Buffalo mac ‘n cheese, a new burger with a familiar flavor profile (more on that later) and “slam dunk dip,” a layered bean dip-inspired protein bowl, all of which make use of USDA commodities and meet national school lunch guidelines

So how do you find those winning menu items? How do you relate to students of different ages? How do you collect data? Read on for Warren’s best advice on the trial-and-error world of taste testing in schools.

Setting up and gathering feedback

For lunchtime taste tests, Warren sets up a table—in the middle of cafeteria but not in the way of traffic—and makes herself noticeable with signage and her personality: “This is what we’re tasting today, come talk to me,” she says to kids.

It’s important to get out into the cafeteria—after planning the logistics—rather than just placing new items on the line.

“If we do that, we don’t reach our [lunch] packers, and those are the ones we want,” Warren says. From this thought came the idea to use a rolling cart in some cases, dressing it up with a tablecloth, “like a Caesar salad cart you see in restaurants.”

Two staffers follow Warren along with the cart, one with the voting box or chart and the other distributing stickers and high-fives—two of the most effective incentives for the younger grades.

A simple voting mechanism of yes or no has proven to be more effective than a more extensive questionnaire or comment card format, Warren has found, since kids already have a short lunch period.

At the middle schools and high schools, a chart is divided into three sections—one for each menu item—featured columns to check yes or no. For elementary school taste tests, Warren uses a color-coded board that’s easier for younger kids to handle.

There’s obviously a big difference between a kindergartner and a high school senior…and a lot of variation in between. So taste testing should be tailored to the locations you’re visiting, Warren says.

During one cafeteria taste test, Warren was having trouble getting elementary school kids to try black beans. Since Warren knows that kids in this age range enjoy watching silly/outlandish “challenges” on YouTube, inspiration struck.

“I just took one scoop of black beans and I said, ‘Who wants to do my super-duper black bean challenge? Just eat one bean,’” she says. Before she knew it, one boy had tried it, a group of his friends had gathered and high-fives ensued, and “I even got kids asking for more bites.”

For kindergartners, Warren has started to do tasting labs, complete with lab coats and a fun science theme. “We let them explore new food after they’ve had lunch.”

And at the high school level, Warren is taking advantage of the fact that many students are ready for more grown-up flavors. She recently tested Buffalo mac ‘n cheese that uses USDA chicken, USDA cheese, Buffalo sauce and whole-grain pasta. There’s a tiny amount of bacon on top, not enough to mess up the nutritional profile, but enough to get kids saying, “Is that bacon on there?”

That burger—labeled by its manufacturer as a meatloaf burger—has a flavor profile that pretty much appeals to all ages: the McDonald’s burger.

Warren is part of a purchasing co-op made up of other small districts in the area, and when they taste tested this patty, Warren was instantly transported to the drive-thru. The only problem was, the meatloaf moniker. “Kids don’t want a meatloaf burger,” she says. So instead, the burger was named after the school’s mascot, the Fighting Leemen (the burgers are called LeePeople burgers, a more gender-neutral term).

Both are important, because sometimes anecdotal evidence can lead to more concrete data with follow-up. For example, Warren has seen how gradually introducing chickpeas, then hummus has affected choosing behavior in students.

“I think it does; I’ve seen it anecdotally,” she says. “But I also want the data to back it up.”

Sometimes trying a new menu item without announcing it first—just placing it on the line—can provide a baseline number for how interested kids are in that item, Warren says.

“We tried three colors,” Warren says. “We said, ‘If green’s not your flavor, try red or yellow.’”

The test found 60 of 80 students trying the peppers. The next flavor lab incorporated the peppers into “cowboy caviar,” the healthy snack dip with black beans, corn, onions and peppers. And the next time, pepper boats will be tested, with data being collected along the way, ultimately determining how bell peppers can and should be used on the menu, according to students’ tastes.

Since labor and facilities limitations can put a damper on using a bunch of unexpected fresh produce at most schools, taste tests are a good way to introduce a vegetable that may not be practical for everyday menus.

Working with local growers and the Chef Ann Foundation, Warren has been incorporating more local products than ever. But it’s work, she says.

“We did school-wide tastings in cafeterias with a grant for Project Produce to get fresh-snipped green beans,” Warrens says. “Most students may be used to the way we cook them in the South—cooked down—so I wanted them to try an al dente green bean. But I was snipping 80 pounds of green beans. The processing part is just too much on a regular basis, but it’s good to expose the students to other things.”

No shortcuts: You have to be there

Getting out into lunchrooms and interacting with students is imperative to finding out what they really think and making the most of taste tests. Sometimes this can be a little daunting to any school foodservice director, Warren admits.

“It can be intimidating,” she says, recalling a less-than-civil interaction with a high school student when she first started. “You have to be ready for that. But if you’re not willing to be there, get someone who is good at it and delegate. You have to be engaging. If I just stood at the tasting table and didn’t reach out, they may just ignore me.”

Mostly, Warren emphasizes the importance of being adaptable when coming up with taste testing ideas.

“The important part is to have takeaway lessons each time you do it,” she says. “And don’t ever think that you’ve nailed it.”