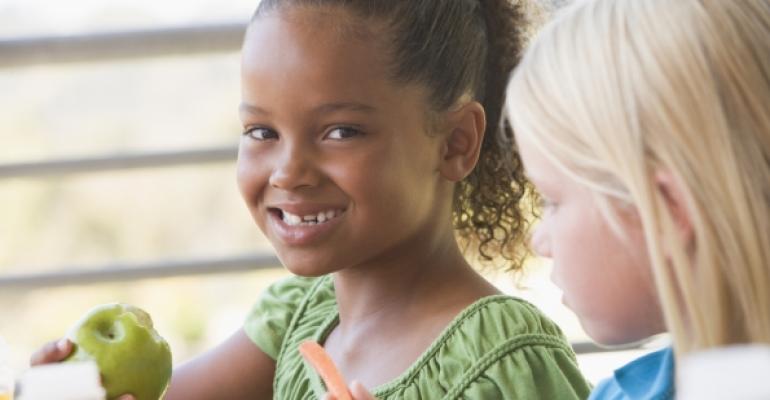 How to motivate kids to eat better, backed by science

Paying elementary students to eat a fruit or vegetable for a short period of time can motivate them to establish healthier eating habits over the long term, finds a new study published in the Journal of Health Economics from researchers at Brigham Young University (BYU), Carnegie Mellon University and the University of Pennsylvania.

For a year and half, the study followed 8,000 elementary students in first through sixth grade at 40 elementary schools near BYU in Utah. During lunch, students who purchased and ate at least one serving of a fruit or vegetable received a 25-cent token that could be redeemed at the school’s store, carnival or book fair. Students were welcomed to eat more than one fruit or vegetable; however, they could only receive 25 cents per day each each day. Each school was allotted $2,000 in tokens. The study was funded by the USDA.

“Two things were possible,” says Joseph Price, associate professor of economics at BYU, who co-wrote the paper with George Loewenstein, professor of economics and psychology at Carnegie Mellon University, and Kevin Volpp, professor of medicine at the University of Pennsylvania. “The monetary incentive would either crush students’ intrinsic motivation and we’d see less interest in eating fruits and vegetables after we took the incentive away. Or the act of eating fruits and vegetables would create a habit that we’d see continue even after we stopped paying them.”

Price and his associates worked directly with each school’s PTA to establish, explain, monitor and collect results. The experiment lasted between three and five weeks, depending on the school, and unintentionally increased the number of students eating school lunch.

“Fruit and vegetable consumption was significantly higher on day two than day one,” says Price. “Once kids understood what the program was about, they were eager to participate and encouraged their peers to participate.”

Price notes that in schools where cash was initially used instead of tokens, there was an increase in “entrepreneurial activity” and bullying.

“The tokens were a functional reminder of how the student earned the reward,” Price says.

Two months after the incentives ended, more students across the board were still eating a fruit or vegetable at lunch than before the experiment began.

“The differences were much bigger in schools that had done the experiment for five weeks compared to those who only did it for three weeks,” says Price.

“This study speaks to broader issues about rewards and incentives in schools,” says Price, adding that if schools are serious about healthy eating, conducting a similar experiment would likely have a positive impact on fruit and vegetable consumption. “Rewards can be a powerful tool where habits form and preferences change. In this case, it doesn’t necessarily have to be monetary. Schools could try nonmonetary rewards, such as extended recess or gym.”