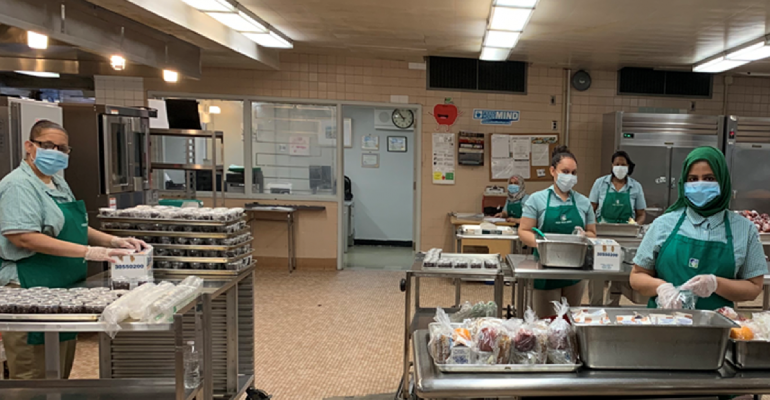 The nation’s largest school district has served more than 100 million meals during COVID.

As the largest public school district in the country, New York City’s Department of Education (DOE) has been one of the hardest hit during COVID-19. But through the shutdowns, reopenings and continued uncertainty, offering wholesome meals to students—and the community at large—has remained a constant.

The Office of Food and Nutrition Services has produced nearly 100 million meals over the last 13 months, serving an average of 300,000 to 500,000 students and city residents per day. (Down from 950,000 meals per day during normal operations.) “On the first day that NYC public schools were closed, our food service transitioned to offer grab-and-go meals at 550 Meal Hubs across the city,” explains NYC DOE Deputy Press Secretary Nathaniel Styer. “Doing so was a critical part of continuing to support our students by providing universal meal service at convenient locations.”

Despite the cascade of pandemic challenges, that initial pivot from normal cafeteria service to grab-and-go meals proved the hardest of all. “It required quickly modifying menus, adjusting orders for food and supplies and providing clear updated guidance to kitchen staff,” Styer says. At the same time, keeping staff safe while the virus surged was paramount. In addition to quickly acquiring the necessary PPE and cleaning supplies, meal preparation areas were restructured to better facilitate social distancing. “For example, staff were encouraged to utilize spaces outside the kitchen for meal prep since building were empty of students,” says Styer.

The logistics of it all coupled with supply chain vulnerabilities dictated that the grab-and-go meals be kept simple. Typical Meal Hub offerings included basics like sandwiches, wraps, yogurt, fresh fruit and milk. As the Office of Food and Nutrition Services gained their footing, they began to offering meals to any city resident who wanted one. “Once we started serving to the general public in April 2020, we had a good sense of how things would go for the next few months,” Styer explains.

The grab-and-go meals soon evolved to include offerings that could be reheated, like chicken with mixed veggies or turkey dinners with mashed potatoes and gravy. Take-home meal kits like frozen pizzas were also added. “Early on there was a serious concern of disruptions,” says Styer. “Fortunately our product basket is diverse enough that isolated shortages were compensated with alternate items.” Working closely with vendors throughout the pandemic has helped the Office of Food and Nutrition maintain continuity of service by identifying potential supply chain vulnerabilities early on. 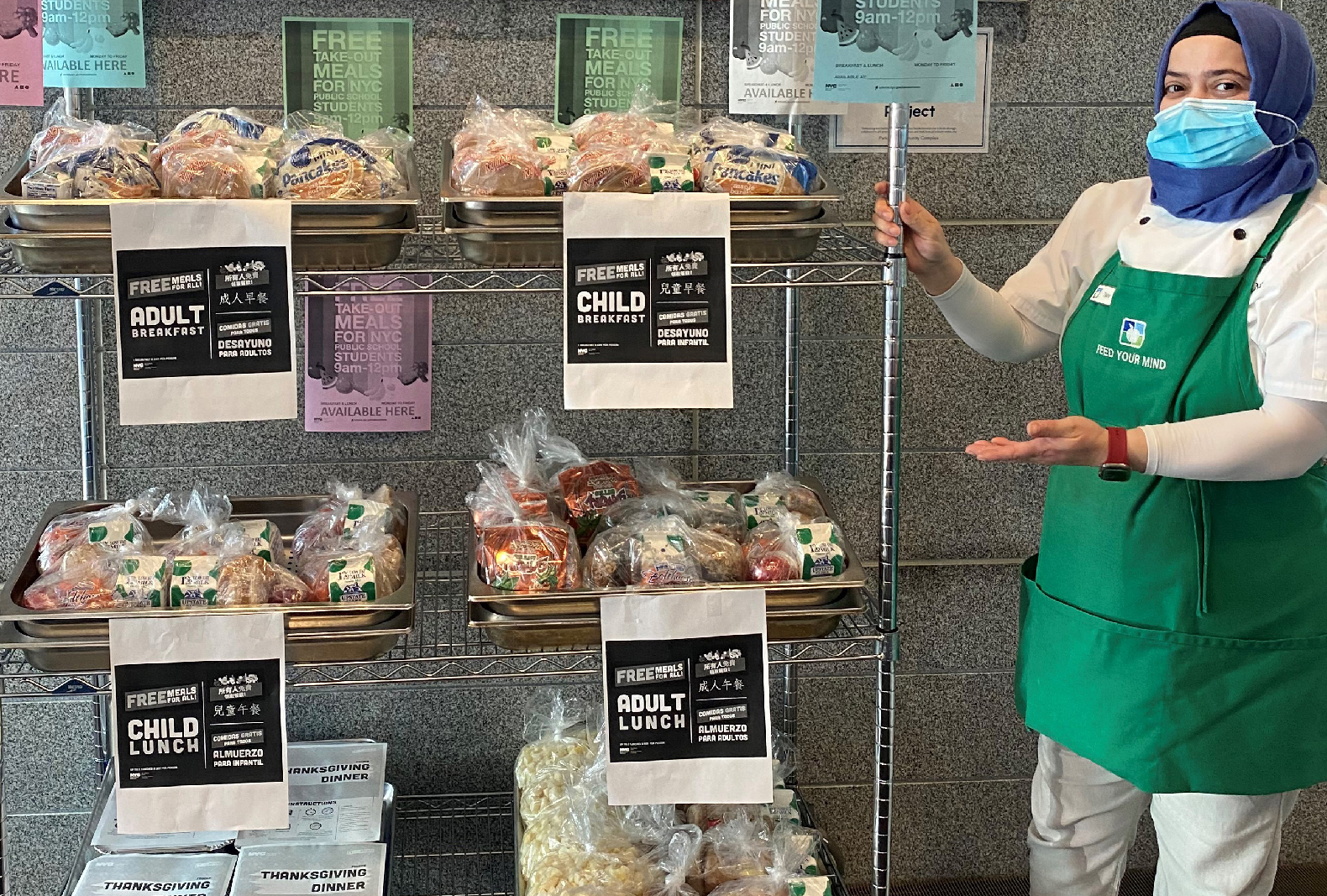 A foodservice staffer shows off free breakfast kits for students.

Foodservice staff pivoted once again in September when a portion of students came back to school. Separate meals were needed for in-person and remote learners, then a closure would once again dictate that all of the food had to be served at the Meal Hubs. That juggling act is still going on today as more—but not all—of the district’s students have returned to the classroom. Currently, roughly 45% of meals are served to students in person and 35% are served to remote learners. The remaining 20% of meals are served to the general public, Styer says.

Even with the general sense of optimism vaccines have brought, the district’s plans for next fall are far from set. “We all know that conditions on the ground are shifting daily,” Styer acknowledges. But after more than a year of learning to live with—and quickly adapt to—uncertainty the Office of Food and Nutrition Services feels ready to take on whatever might come next. “We are well poised at this point to provide meal service under a variety of instructional and building occupancy models,” he says. “We will work closely with school administrations to meet the needs of students per the prevailing public health recommendations and city hall decisions.”

Styer credits the strength of the district’s foodservice staff as the driving force behind the Office of Food and Nutrition Services’ ability to pivot in changing circumstances. In fact, the pandemic has shown just how crucial a solid foundation is to a foodservice operation’s success. “The single biggest lesson learned over the year is the importance of investing in our teams and understanding our operations during ‘stable’ times,” he says. “We knew what we could do, what we would not be able to do, and we had the confidence that our front-line women and men in the kitchen would do their very best in service of our mission to feed New York City.”