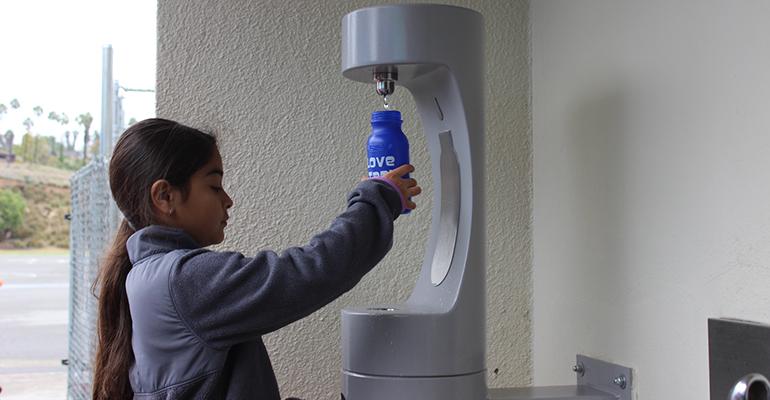 Most people of a certain age remember the traditional water fountains that were just about the sole source of drinking water in school buildings everywhere. Today, kids are as apt to carry around bottled water as to use the stationary units with the uncertain water pressure and even more uncertain hygiene.

But while bottled water is certainly more sanitary and convenient than those traditional fountains, it is also wasteful as the plastic bottles often end up in landfills.

Which is why the growing trend of students using the more ecological friendly refillable bottles is something to encourage. And that’s what Vista USD in California did recently by installing hydration stations at 11 of its 29 school sites. The stations allow kids to refill reusable bottles quickly.

“A lot of [the rationale for the stations] is the convenience factor for students,” explains Jamie Phillips, director of child nutrition services. “A lot of times, what you’ll see with traditional water fountains is students bending their water containers in the perfect way to get all the water they can in, and even at that just get it about half full. With the hydration stations, they can put the bottle underneath [the water spout] and press a button and fill it all the way up. We don’t have to worry about them touching the faucet with their bottles, so for sanitary reasons there’s also a big benefit.”

They hydration stations also fill bottles much more quickly than the traditional water fountain drinking stations can, in about half the time, Phillips estimates.

At most Vista USD sites, students bring their own refillable bottles if they want to use that hydration option. At one site, Monte Vista Elementary School, the Vista Irrigation District, which partnered with the district on the hydration station project, donated water bottles to each student to promote the new program.

The Irrigation District was the one that first suggested the idea of the hydration stations, Phillips says, and provided a grant to install several. The district then decided to expand the program on its own to more schools.

Phillips says hydration stations will continue to be installed at more district schools “as funding allows.”

Meanwhile, the growing use of refillable bottles is making a beneficial contribution to the environment.

“The average American wastes an average of 167 water bottles a year,” says Phillips. He estimates the district will save almost 93,000 bottles from the waste stream as more students turn to using refillable containers.

“When they first installed them they had really long lines because they all wanted to fill up their water bottles,” Phillips recalls. “Even the teachers love them because students no longer have to get up in the middle of class to go refill their bottles”

Vista USD encompasses the municipalities of Vista and Oceanside, located adjacent to each other north of San Diego. The enrollment is around 21,000 with a free/reduced percentage of 64 percent.