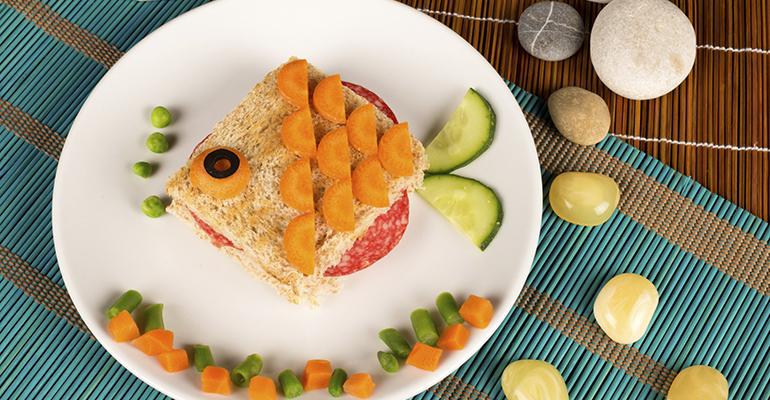 Inside School Food: Chefs get creative, and a little sneaky

We learned a lot in the final month of our fall 2015 season. Two episodes with major K-12 nutrition industry players were, we hope, the first of many to offer listeners a close look at the process of reformulation to meet new nutrition standards. We got personal with Dora Rivas, who left her influential career in school food just four months ago. Finally, we took a virtual trip to Japan, for an update on that nation’s much-admired system of elementary shokuiku—“food education.”

Sodexo’s Lisa Feldman is a wiz—and a thief. “I play with food for a living,” says Sodexo USA’s top chef. “It’s fun.” Feldman is the creative brain behind the company’s collaborative style of culinary problem-solving; she works closely with vendors, self-ops and even competing foodservice providers. “Typically, when a large processor is developing a ‘better for you’ product for schools, they don’t necessarily have the insider expertise to create something that kids are really going to like.” She freely admits to stealing good ideas—and giving her own away. “Nothing is proprietary,” she says, because everybody fares better when innovations are widely shared. Under her watch, these have included everything from mushrooms in ground meat, for natural flavor enhancement and moisture retention, to egg white in whole-grain pasta, to hold its shape when held in sauce. (Better school food: Borrowed, hacked, and shared)

How did they change that? Two major K-12 vendors—Red Gold and Rich’s Products—lift the curtain on what it took to meet new limits on sodium and new requirements for whole grains. For processors of tomato goods, the challenge has been easier than for other sectors. At their best, reformulated sauces, salsas and ketchups are not just dramatically lower in sodium, but clean label, too, thanks to natural ingredients like sea salt, potassium chloride and tomato concentrate. For commercial bakers, the technical challenges have been much more significant. “Sodium is such an important part of the formulation,” says Rich’s Director of Product Training Shirley Brown—not to mention more difficult to reduce when simultaneously adding heavy whole-grain flour. At the same time, Rich’s was—and is—pursuing cleaner labels, which adds to the cost of reformulation. What about Target 2? “We’ll have to address the formulas again,” says Brown. “We’ll all become smarter.” (Reformulation revealed)

Dora Rivas: still speaking out. When Rivas announced her departure from her post as executive director for Dallas ISD, school food lost a giant. But our loss is the military’s gain as she takes up her new post directing child nutrition programs for the Army and Air Force Exchange Service. She took a break from her new job to reflect on a half century of service as a dietitian, school foodservice director and SNA leader. It began in a South Texas migrant worker’s clinic, where Rivas was exposed to the crippling impacts of hunger and obesity. As the first dietitian in the Brownsville schools, she introduced whole-grain bread and low-fat milk in 1977. As foodservice director there, she pioneered the nation’s first breakfast in the classroom program, in 1993. On moving to Dallas, in 2000, Rivas was challenged by parents eager for immediate, sweeping change. She became—and still is—an outspoken advocate for adequate reimbursement and a more holistic, schoolwide commitment to student health. “What Congress and the community have to understand is that they have very high expectations. We have very high expectations. But to produce the quality that we want and expect from our schools, the funding needs to keep up.” (Dora Rivas remembers)

Japanese school lunch is very cute—and very serious. We are all familiar with endearing images of Japanese school children clad in spotless white caps and smocks, bowing to their lunch ladies and serving their peers in the classroom. Behind the pictures is a time-honored agenda to teach not just healthy eating but also gratitude, cooperation, courtesy, cleanliness, reverence for nature and pride of place. Children love it, says documentary filmmaker and school food activist Atsuko Quirk. Her popular short film, “School Lunch in Japan: It’s not just about eating,” shows both their delight and the social and behavioral impacts of the kyushoku program’s strict protocols. “The goal is to use the lunch period for education,” says Quirk—at the same level as math, science and reading. Where the Japanese system does not shine, she suggests, is in its failure to develop a more American-style approach to addressing growing hunger in a shifting socioeconomic landscape. (Lunch lessons from Japan).