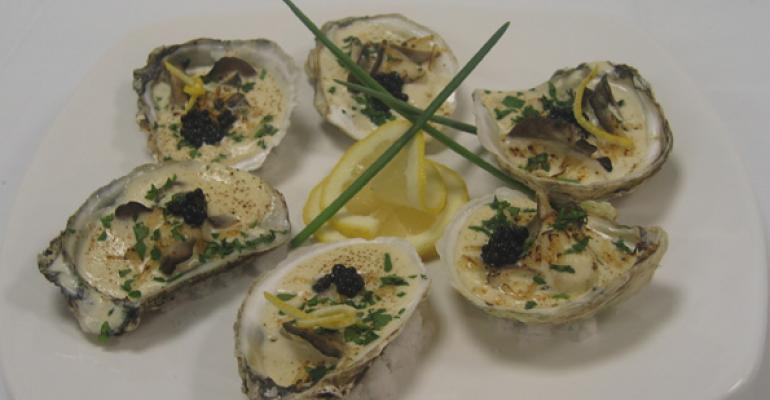 The entries at last week’s Flik Independent School Dining-Mushroom Council Recipe Contest were great examples the rich, earthy flavors mushrooms can add to any recipe and the role they can play on the K-12 menu.

The contest began a few months ago at Flik school accounts where chefs came up with several recipes starring mushrooms. Crowd sourcing then played a part, as students tried the dishes and then voted on their favorites, which then were submitted.

Twelve entries—in the categories of breakfast, salad, swapability and entrée—focused on the healthful, flavorful things that happen when mushrooms get into the school-meal mix.

The finalists’ recipes were then prepared by students at the Institute of Culinary Education in New York City last week and judged by four industry experts.

While the idea of switching out meat with mushrooms has been on chefs’ radar for some time, in many instances mushrooms working together with meat in a recipe can prove a winner. A grand prize winner, in fact.

That would have been the Baked Maitake Oyster New Orleans Style, submitted by Doug Gauthier, sous chef at the Middlesex School in Concord, MA. This intense and elegant dish was served on a real half shell, and did contain real oysters—just not the way one would think.

“I swapped the oyster with the mushroom, but I used the shucked oysters to emulsify the sauce,” Gauthier says. The result is an oyster filled with meaty deliciousness, courtesy of the Maitake mushroom.

“I learned about Maitake mushrooms while working in a restaurant where the chef was a big fan,” he says. “In Japan, Maitakes are the chicken soup cure-all. They’re sold powdered and are known for their medicinal qualities.” Gauthier likes them for their aromatic, meaty presence.

He was inspired to create the dish after driving down to Cape Cod with his girlfriend for spring break, he says. There, they dined at a bistro and raw bar, The Naked Oyster, and the idea took hold.

While he created the recipe primarily for catered events (alumni dinners, donor events, private parties and fundraisers), students did have a chance to try the oysters.

“Yes, it’s an oyster,” Gauthier says, anticipating the ‘but isn’t that so expensive?’ question. “It doesn’t have to be really expensive, especially if you’re in the Boston area like we are. There are local, affordable oysters year round.”

Here are the other winners from the contest, a treasure trove of mushroom inspiration: 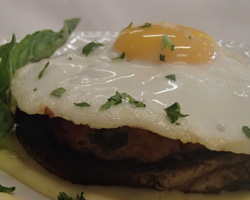