In this consultant's view, K-12 school meal participation rates for 2012-13 suggest that the federal school meal program is shifting in terms of its traditional role.

The implementation of new federally-mandated menu planning regulations in school food service last year caused turmoil in the industry.  Both operators and vendors have reported declining sales and participation.  Yet the press has been full of contrasting stories: about kids rejecting the new meals and schools dropping out of the program; and at the same time, of schools with high acceptance and kids who like the new fare.

Official USDA reports repeatedly have said that school meal counts were going up and that as schools and students adjusted, things were getting better. What’s the truth?

In fact, it’s far too soon to be able to assess the long term impact of  the new regulations.  For some, the glass is half empty.  For others, half full.  And we are still waiting for the full impact, as additional changes to school breakfast went into effect in July other breakfast changes are scheduled for next year. But it is worth taking a hard, preliminary look at the numbers now that most of those for the 2012-13 year are in, and before numbers for 2013-14 school year are available.

USDA data, reported each month, says that for Fiscal 2013 through May (October 2012 – May 2013), Average Daily Participation (ADP) for school lunch declined by 1,097,395. The data also shows that the number of free meals served increased by 153,343. At the same time, Reduced Price participation declined by 175,671, and Paid by 1,097,395. But USDA was also correct, because the decline in May was less than the YTD data.  So it would appear that things indeed had been getting better.

USDA data for the number of schools sponsoring the National School Lunch program is reported each year in October (and is not available until January), as is enrollment data.  There was a decline of 399 school outlets this past year.  A fair portion of that was likely due to normal contraction as some schools closed even as overall enrollment increased.  In fact, enrollment for the 2012-13 school year increased by more than 600,000. 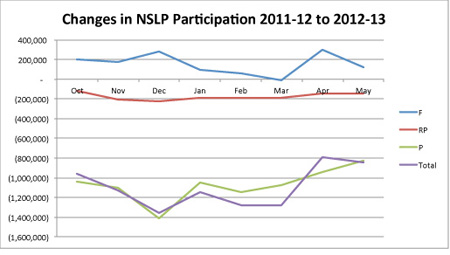 What does the increase in enrollment mean for the participation numbers?

And, based on the breakdown of ADP by eligibility, we missed more than 100,000 of the neediest kids, those receiving free meals.  Of course, some of that might have been the result of a gradually improving economy, with a smaller percentage of enrolled students certifying for free meals. Numbers are funny that way. But the data showing an increase in free meals served overstates the true impact.

The ratio of subsidized to paid meals is shifting

One concern about the changes in participation reported by USDA is that the ratio of free/reduced price/paid meals is shifting. In FY 2012, 58.9% of meals served went to children that were eligible for free meals.  32.4% of meals were paid. Last year, 61.6% of meals were free, versus 30.0% paid.  This underscores the view that the national school meals program is moving closer to being a welfare program as opposed to its traditional role as a nutrition program for all school children.

In her excellent book Free for All: Fixing School Food in America, Janet Poppendieck points out that as paying children opt out of the cafeteria, the stigma associated with participation increases for needy children, driving them out also.  Based on the numbers, children who have more choices because they have money are finding alternatives to the nutritious meals offered in schools. We may indeed be seeing a decline in participation among free and reduced price children who may not have those choices, an explanation that is apparently borne out by the data.

It’s too soon, and there is not enough data, to draw any solid conclusions about the impact of the new rules on participation.  The changes for breakfast just went into effect and we won’t have any good data about the new fiscal year's performance for several months.  Beyond that, it may take years before the dust settles and sponsors and kids adjust to the new reality.

Hopefully we will see kids adapt and adopt the healthier options that are now part of the school environment. That's a social necessity in the face of the obesity crisis.  And, hopefully, the neediest among them will not be left out as schools, families and customers adapt to these changes.