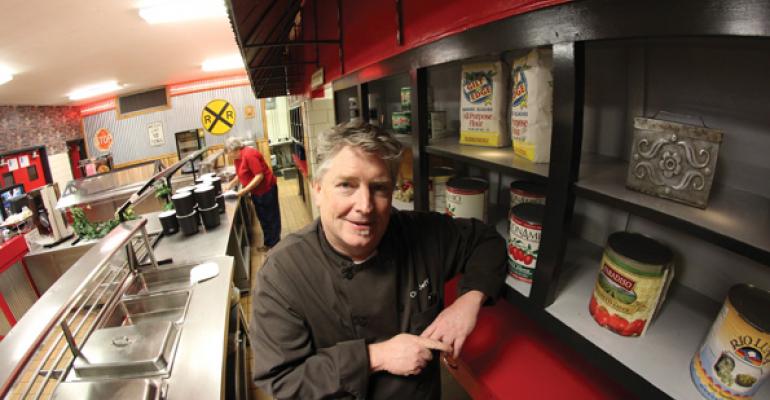 Jeff Denton was a successful chef in the commercial world of hotels and restaurants when he decided to join the school nutrition industry 23 years ago. He continues to use those culinary skills to promote his program to students, parents and the community.
News & Trends>K-12 Schools

Jeff Denton is an accomplished chef and all-around Renaissance man. He has published four books, stars in his own TV show, writes music, runs a farm-to-fork themed restaurant (TS Fork) and is managing partner for a 5,000-acre farm/vineyard.

Ponca City, OK, used to be a booming oil town. Conoco Oil was the region’s biggest employer and the population included a hefty proportion of engineers, administrators and other white collar professionals.

Jeff Denton, director of nutrition services for the Ponca City Schools, grew up in the area and remembers those days well. When he took over his current position in 1990, the system’s free/reduced percentage was under 30%.

Today, that percentage is 70%, thanks largely to a decline of the local economy that followed Conoco’s merger with Phillips in 2002 and a subsequent shutdown of its operations in the region. “When Conoco left, a lot of engineers and other professionals also left because there were no jobs for them,” Denton says.

That was one big blow to the dining program. Another has been the evolving USDA regulations that have resulted from the Healthy, Hunger-Free Kids Act of 2010. In particular, the latest rules have challenged Denton—and all of his colleagues—as they’ve struggled with implementation while keeping their programs financially viable.

Although large districts generally get the most press, smaller ones like Ponca City struggle just as hard to meet federal requirements while satisfying their customers—yet must do it with fewer resources. Denton’s ability to develop creative solutions to such challenges over the years earned him FM’s recognition as our 2013 K-12 Innovator of the Year.

Denton is an accomplished chef and all-around Renaissance man. He has published four books, stars in his own TV show, writes music, runs a farm-to-fork themed restaurant (TS Fork) and is managing partner for a 5,000-acre farm/vinyard, among other things.

But nowhere is he more challenged than in keeping Ponca City Schools Nutrition Services effective and financially sound.

A Chef Goes to School

Denton already had a successful career as a chef in hotels and restaurants before joining the school system. It’s a familiar story: commercial chef gets burned out on the long hours and time away from his family and seeks a position with a more reasonable schedule.

Denton saw an opening at Ponca City Schools 23 years ago, applied just before the deadline and got the job. “I had no idea what I was doing,” he admits today.

One might say the same thing about the department he was taking charge of. At the time it was purportedly running in the black, but, as Denton soon discovered, that was only because it was not accounting for labor costs (they were being allocated to the school system’s general fund).

Shortly afterwards, a new comptroller declared an end to that practice and Denton was asked to find a way to make up the half-million-dollar difference. If the department couldn’t operate in the black, the board had decided its operation would be bid out to an outside contractor.

“I started by visiting other school systems that were making money to see what they were doing,” Denton says. He soon discovered that the key to success in school foodservice was the same as one key to commercial foodservice: you have to attract a sufficient number of customers.

Branding strategies were just coming to schools at the time, as was more attention to café decor and merchandising. Such techniques were well within the comfort zone of the former commercial restaurateur. The result was a new brand name and image for the nutrition services department, Campus Mart, one that is still in use today.

“The product we served was never bad,” Denton emphasizes. “It was actually quite good by the school food standards of the time, but we had to make it more attractive to draw in more kids. I ran the numbers and determined where we needed to be in terms of counts, and worked hard to get there—and we did it without price increases.”

In the elementaries, Denton introduced more choices—two hot and up to six cold entrees were offered each day. Meanwhile, the secondary school service was augmented with a progressive a la carte program. The result was an escalation in participation percentage from the 70s into the 90s.

A New Challenge From the Feds

Ponca City’s school nutrition program continued to be successful even through the economic dislocation caused by Conoco move, which was completed shortly before the nationwide recession hit five years ago.

But recent changes to USDA regulations governing school nutrition programs have proven to be perhaps an even bigger challenge.

“We spent the last five weeks of school last spring talking about the coming changes and, frankly, made them sound worse than they turned out to be,” he says. But we wanted to make sure everyone was prepared. The whole grain mandate and the items we couldn’t serve any more were the two biggest challenges,” he adds.

To keep participation and interest up, Denton has had to be extra creative. His strategies include finding ways to offer layers of flavor, such as with rice bowls, burger bars and other “build your own” choices. At the high school a Caesar salad built to order with different types of chicken (or no chicken) is a year-round hit, as is the weekly “chicken day” each Wednesday, which is offered system-wide.

Costs have been kept in line as much as possible through the development of from-scratch recipes that fill out plates with inexpensive components but still look attractive, and with efficient purchasing.

Denton also promotes his program tirelessly, visiting schools regularly to talk about what’s on the menu and why as well as to educate about food and nutrition. “I’m at an elementary every day,” he says proudly. “I am the most identifiable person in Ponca City with the kids.”

Indeed, he’s widely recognized in the community by parents and former students, who often go out of their way to greet him in public and social settings. He’s also made it a point to work closely with families of physically and mentally challenged children in the community.

Denton has also assisted academic programs by designing special lunch menus for students “reading their way around the world,” and put on culinary demonstrations at school events.

Another promotional innovation is the Junior Chef Camp Denton has hosted for the past five years. Held at a local ranch and featuring tours of growing fields and animal pens, it also includes a hands-on educational component in which students learn basic kitchen skills and cooking techniques. The finale is the preparation of a four-course meal for invited guests.

One of the results of this constant promotion has been an increase in fruit and vegetable consumption, one of Denton’s primary topics when addressing students. It has increased 60% in the past five years thanks to a combination of education, sampling, and the introduction of attractive Farmers Market Bars to cafeterias that have led to menuing the most popular choices on a regular basis.

Denton says that with the cost of fruits and vegetables rising, he has to make sure that what he is serving is actually consumed, so it makes no sense to serve items that kids tend not to like.

He has also worked with suppliers and peers on ways to meet the challenges posed by the new regs. He assisted a wheat cooperative with developing a whole grain pizza crust cut to a specific pan size (after being a success in school trials, it is being rolled out nationwide). He has also travelled to other districts to offer advice on menu development and purchasing, and has conducted seminars for vendors  interested in working with the K-12 market. His cooperation with other districts included the helping organize a purchasing cooperative to help smaller districts get better pricing as well as menu planning assistance.


Denton is a longtime active member of the school nutrition community, serving four terms as president of the Oklahoma SNA. He is seen as a “go to” figure for both local media and legislators on issues of child nutrition and the needs of the school foodservice segment.

One new challenge this fall will be a change in the schedule at the high school, which will reduce its lunch periods to two from three last year (and four a few years ago). It will impact counts at the 1,600-student school because of the longer lines. Denton is compensating with a planned new “Fly-In” grab-and-go outlet. Located in a former bookstore space around the corner from the main cafeteria, it will offer prepackaged salads and sandwiches and take some of the pressure off the cafeteria.

College and University Innovator of the Year
Jun 20, 2013