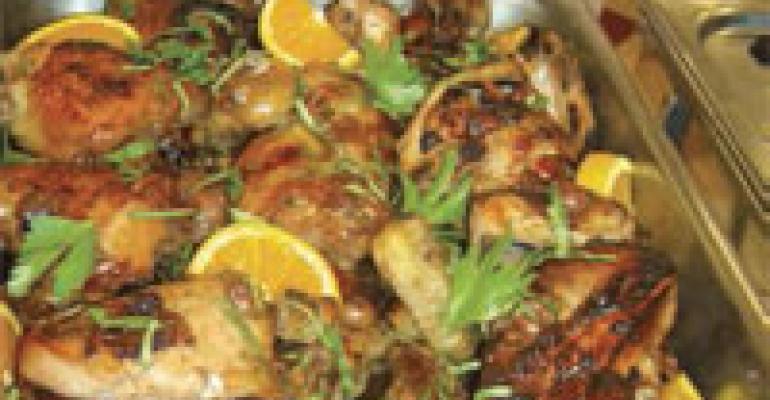 Denver Public Schools is getting back to basics with culinary classes for its staff.

This past July, 120 nutrition services staffers from the Denver Public Schools (DPS) did what would have been considered laughably redundant a generation or so ago. They were learning to cook.

The group, the first in a planned three-year program that will eventually put all 500-plus DPS nutrition staffers through the same training, rotated through a set of classes on topics ranging from knife skills and baking to cold prep (for the planned school salad bars) and scratch cooking of dishes like mac and cheese, chili and burritos.

The three-week course was taught by DPS supervisors augmented by some outside expertise from commercial chefs and manufacturer representatives.

The classes were conducted in preparation for the launch of DPS' menu upgrade program, which seeks to serve scratch cooked meals at all 140 district school sites in three years. This fall, the first 30 schools will launch the pilot phase of the project, with locations ranging from elementaries to high schools.

It marks at least a partial return to the ‘old school’ days of fresh-prepared meals when battalions of “lunch ladies” chopped, diced, stirred, mixed and baked everything put out on lunchroom serving lines.

“The idea came up year and a half ago,” says Leo Lesh, executive Director of enterprise management for DPS. “We put together a program, using a curriculum from the National Food Service Management Institute (NFSMI) combined with our own additions.”

The initial group consisted of volunteers, but participation will henceforth be mandatory, says Lesh. “I told them that at the end of three years, everybody will have to have gone through this class to continue working for us because this is the direction we're going.”

He says classes will continue to be offered through the fall so that more schools can begin serving the new scratch-based menu starting in January.

That menu will largely be composed of previously available menu items, except that instead of being mass-produced offsite, they'll be made from scratch at each school.

“We'll still have chicken nuggets for a while since you have to buy those in advance, but the turkey and gravy is now made with raw turkey roast and our own gravy,” he explains. “We also make our own pizza crust and marinara sauce, sauté our own veggies and eggs for the Kung Fu rice, make our own quiche and our own meat sauce for pasta.”

To promote the new approach, Lesh invited the public to have a school lunch a couple times while the training was in session.

“As long as we were feeding the help anyway, we just made 50 to 60 extra servings,” he says. “We had parents and people from the Board of Education show up to have lunch with our cooks, ask then questions and enjoy what a typical school meal in Denver is like.”