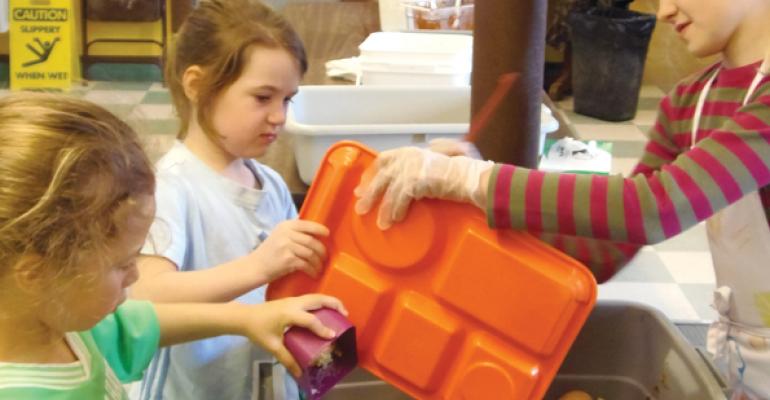 Kids Lend a Hand to Sort Waste for Recycling

Students enjoy fresh, healthful dishes like kale chips, quinoa and Brussels sprouts with their lunches, then help sort the waste into recyclables and compost afterwards.

It’s all part of a foodservice program run by Beeman Foodservice Director Christa Gowen and an initiative called the Green Kitchen Project initiated by Kristen Andrews, education coordinator for the Food Service Cooperative that works with the school nutrition programs on bringing more fresh and local product to the district lunchrooms.

Gowen says her school was only recycling milk bottles previously, but the Green Kitchen Project initiative brings students from the school to the kitchen to sort out recyclables and compostables from the trash. The latter are sent to a nearby chicken farm. The students sign up for the trash sorting service as a way to fulfill a community service requirement.

Gowen, who is in her second year at the school after studying nutrition and food science at the University of Vermont, has taken to her role with enthusiasm. “I wanted to work with kids and I love cooking, she says.

She introduced a series of dishes that her customers liked, even though some don’t sound like choices that would appeal to kids. These include the kale chips (oven baked with olive oil and salt), roasted chickpeas and chicken tenders using her own seasoning blend to reduce sodium levels.
“I go through a lot of spices,” she admits.

Purchasing is helped by working for the Food Service Cooperative, which has connected the school district with local growers and even a local source for beef.