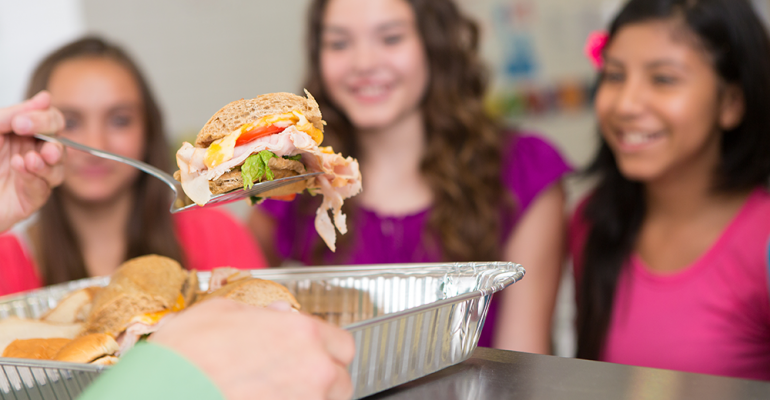 Cape Elizabeth High School dropped out of the National School Lunch Program last spring and is now seeing a bump in meal counts.

The federal National School Lunch (NSLP) and National School Breakfast (NSBP) Programs are the bedrock foundations of most K-12 school meal programs, which is why the vast majority of public school districts in the country participate, accepting the restrictions and mandates in exchange for meal subsidies and free commodities.

But if a school or district has only a negligible proportion of its enrollment eligible for meal subsidies, the advantages diminish and it may find it can do better on its own, free of the federal restrictions.

That has so far been the case for Cape Elizabeth High School in Maine, which left the federal meal programs last fall.

“We had quite a large participation that started to dwindle down after the new regulations [mandated by the Healthy, Hunger-Free Kids Act of 2012] kicked in,” explains Peter Esposito, school nutrition director for the Cape Elizabeth and Scarborough School Departments. “We tried to do different things to keep within the guidelines, but our students are at an age where they are going to be going to college and [they wanted to] make their own choices, so we ran with that.”

The school board agreed with the decision to leave NSLP, and Cape Elizabeth High embarked on its new course last November. Nearby Scarborough High School, where Esposito also oversees the meal program, is following the same course starting this fall.

Cape Elizabeth was able to make this move because only about 3% of its enrollment of around 550 qualify for NSLP subsidies—and most of them weren’t getting the subsidized meals regularly anyway, Esposito says—so it made sense for the meal program to simply continue subsidizing meals for those few students out of its proceeds while modifying its offerings to generate more sales.

Participation has indeed jumped since the program went non-NSLP, by over 100 meals a month, which works out to about $12,000 in added revenue each month, Esposito estimates.

Among items he is now able to serve is pizza made with standard dough.

“Before, we had done specialty pizzas, but the high school kids just didn’t like the whole-grain dough because they were used to the pizza they could get outside,” Esposito says. “Now we can do different doughs with our specialty pizzas and also regular pastas. We have also been able to do some special event meals like a pasta bar where we cooked to order with the principal and myself running the sautée lines.”

That produced quite a shock when it was first tried, as some 400 of the school’s students unexpectedly showed up, so subsequent similar special events have been modified with extra lines and more staff to make sure everyone is efficiently served. 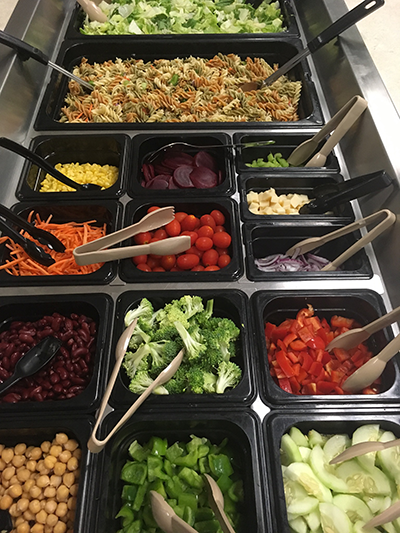 Students “can get pretty much any vegetable they can think of off our salad bar,” says Dining Director Peter Espinosa. (Photo: Cape Elizabeth High School)

Another special event featured a cafeteria staffer rolling sushi, which would not have been possible before because of some of the components didn’t fit federal meal guidelines.

Customization and self-service similar to what many colleges now offer have been staples of the modified program, with encouraging results.

“For some reason, [students] seem to get a bigger kick out of that and it has expanded the meal counts,” Esposito reports. “Kids these days have trained palates—they go out to restaurants, they know what good food tastes like so if we take that all away—especially at the high school level—they’re just not going to eat it.”

However desirable customization is, the realities of short high school lunch periods also dictate that plenty of premade grab-and-go choices are stocked so kids can also get something quickly.

In another attempt to deal with the short time windows, Esposito says he is looking at testing an online preorder option, perhaps as early as this fall, that would let seniors and staffers place orders ready for pickup.

Another popular menu change involved that morning staple, bagels. “They weren’t buying almost any bagels [before] because we had the 2-ounce, whole-grain bagel and kids were [instead] stopping at the corner bakery to get bagels and it was just ruining our business,” Esposito explains.

Now, breakfast sales have followed lunch sales on its upward course, as the school can now also serve regular bacon and sausage, rather than turkey-based alternatives that aren’t nearly as popular.

As for the fear that not abiding by federal meal regulations means loosening nutritional standards, Esposito is adamant that that’s not the case.

“All our recipes have wholesome ingredients and a lot of it comes from farm to school,” he says. “Our salad bar regularly has some 30 to 40 items including a range of fresh fruits and vegetables. In fact, [students] can get pretty much any vegetable they can think of off our salad bar. It’s just that now we don’t have to worry too much about having too much protein in something. Basically, we’re treating it like a college campus or a regular foodservice establishment that isn’t tied to USDA.”