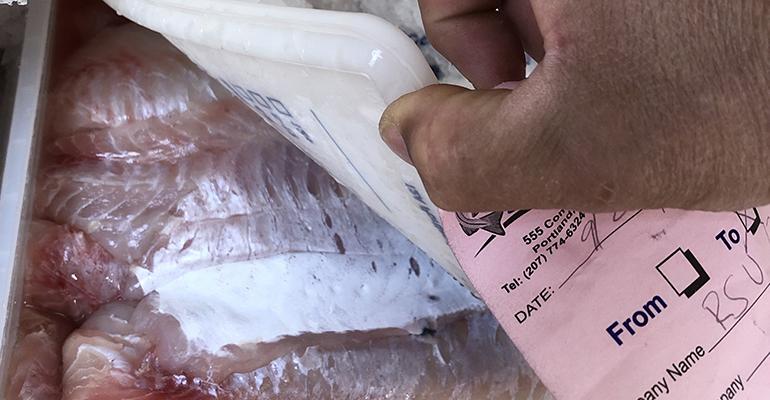 Flynn often finds out what fish he’s getting when he opens the container. “Which is kind of fun,” he says.
News & Trends>K-12 Schools

A pandemic-driven program is bringing fresh-caught fish to students—while supporting the local economy.

That’s thanks to Fishermen Feeding Mainers, a program run by the nonprofit Maine Coast Fishermen’s Association. “Seafood is, and has always been, a part of Maine’s economy and culture,” says Unit 12 Nutrition Director Mike Flynn. “We want to remind children of the local resources we have here as residents.”

The program is one of the few positives to have come out of the coronavirus pandemic. When Maine fishermen weren’t able to sell their catch to restaurants, the Maine Coast Fishermen Association pivoted to supplying local schools instead. The program, which also supplies seafood to local food banks and other organizations, was initially funded by an anonymous grant and continues to run by donation.

Weather permitting, the fishermen head out once a week and return to port two to four days later with their catch, where it’s fileted on site. As soon as the fish is ready, nutrition directors like Flynn are notified to come by for pick up. “I receive an email notice that the boat has arrived and the fish is in processing, and I can pick it up within 24 to 36 hours,” Flynn explains. He receives around 70 pounds of fish at a time—usually hake, pollock or haddock. “Sometimes I’m notified ahead of time what it is. Most often I find out when I open the container, which is kind of fun,” he says.

After bringing the fish back to his district’s central kitchen, Flynn and his team get to work on processing. “I receive the whole filets, so the processing we do is minimal,” he says. The fish is divided into individual portions—around 280 from the 70-pound catch—and then breaded or poached. The breaded portions are seasoned with Parmesan cheese, onion powder, garlic and parsley and individually frozen until they’re baked for lunch service. “The kids seem to like the crispy crunch. And the freshness is just perfect,” says Flynn. The poached filets are combined with locally grown potatoes to make a fish cake. “We’re calling it a Mainely Ocean Burger,” Flynn says.

Soon Flynn hopes to start using the fish in tacos too. “It has a little more assembly, which is a little tricky with the COVID set up and the fact that we’re serving lunch in the classroom,” he explains.

Speaking of the classroom, the new menu items fit right in with the mission of Maine schools to integrate nutrition with local agriculture education. “We have a Maine Agriculture in the Classroom coordinator, at the statewide level. She creates, with input from educators, folks involved with agriculture, and local chefs, educational packets for the foodservice team and educators so they can go another step with local food,” Flynn explains.

And it’s that educational component, that’s helped make the new fish offerings a hit with his customers. “Connection with the teachers is huge, especially on the local front and the importance of getting these high-quality ingredients for school lunch,” he says. “I think a lot of the success had to do with the fact that we provided awareness before it arrived. We’ve had comments saying, wow, I never expected to enjoy this.” Student interest was piqued, Flynn believes, by middle school teachers who tied the local menu items in with marine biology lessons. “The middle schoolers happen to be the leaders in the elementary school. And it really helps when it’s all tied in.”

The Unit 12 district has around 1,000 students, with a 60% to 70% school lunch participation rate. The 280 fish portions that Flynn receives each week aren’t enough to feed everyone, so he rotates serving the fish among the district’s five school. He’ll stockpile what’s left in the district’s central kitchen freezers, and when there’s enough, he’ll do a districtwide fish day. “Last Thursday was our first collaboration districtwide. That day we served about 620 portions. Everyone had pollock, except for one of the larger schools, which had haddock,” he says.

Flynn doesn’t know whether the program will continue on once the pandemic ends and restaurant demand increased. But he hopes it will. “I’m on the really grateful end of it. Fresh seafood in the lunchroom is very rare. But we’re trying to get the kids engaged,” he says.