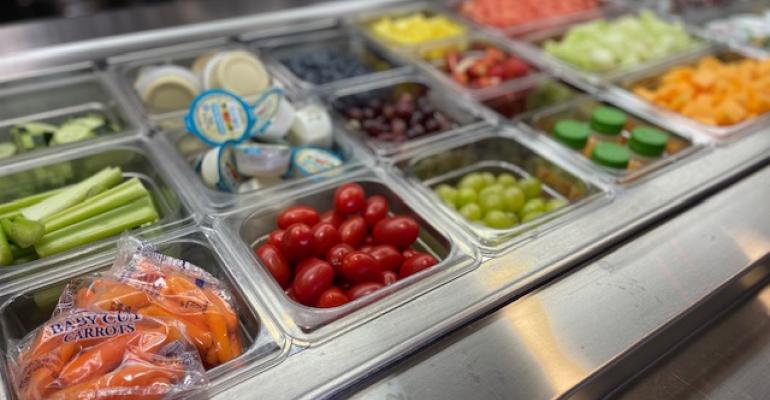 A major goal fulfilled last fall was introduction of a fresh fruit and vegetable bar at the high school at North Andover Schools.
News & Trends>K-12 Schools

The state’s extension of free breakfast and lunch extended through the current school year has been a boon for participation in Massachusetts schools. But a number of thoughtful practices have boosted those numbers even further at North Andover Public Schools.

As of December 2022, more than three-quarters of the 4,600 students in the district were opting in at lunch, up from 45 percent in pre-pandemic days. Breakfast participation had increased to 30 percent across the system, largely thanks to a Second Chance Breakfast program that has been extended through some of the elementary schools. 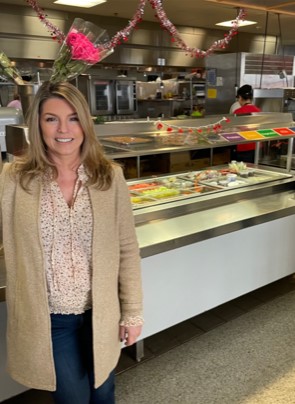 While she credits the “free” aspect of meals with driving some of the demand, North Andover’s food and nutrition director Erika Murphy, left, says menu and operational updates also have helped fuel an appetite for meals.

Some of these updates originated during the summer of 2022, when North Andover schools offered a summer meals program. “As we were working, we put together a list of initiatives we would like to see happen,” Murphy explains. “The list kept getting longer, and we knew securing some of the resources might take a few months, so we had to prioritize.”

A key priority was raising the bar on menus. “I tried to put myself in the kids’ shoes and think about what they want to see,” she added. “We want them to think they’re in an elevated setting, not just going through a tray line of pizza and burgers. We also wanted to make sure the food we put out was the least processed and most nutritious.”

A major goal fulfilled last fall was introduction of a fresh fruit and vegetable bar at the high school. For no-cost meals to qualify for reimbursement, students are required to choose at least one fruit or vegetable per meal, and the fresh choices are plentiful: They include sliced red and green peppers and cucumbers, carrot and celery sticks, green beans, cherry tomatoes, along with hummus cups; red and green grapes, strawberries, cantaloupe, honeydew melon, watermelon, pineapple, blueberries, apple slices and whole apples, oranges and bananas.

Because smoothies, string cheese, yogurt, cottage cheese, granola, and whole-grain croissants and muffins are also available on this line, students can make all their selections there for a reimbursable meal. The fresh bar is also available to students who elect an entrée from another service line.

“The student who goes through the hot sub line might get a hot vegetable to go with their sandwich, but now they can also get a good portion of cucumbers and carrots with hummus,” Murphy says.

Not surprisingly, Murphy says the fresh produce line quickly proved to be a winner. “Almost every student who gets a meal comes to the fruit bar,” she observes. She has been especially surprised at the large number of male students who opt for fresh items—typically, one would expect to see female students gravitating toward fruits and vegetables, she adds.

The high school has long had a salad bar, and it remains popular, but some of the more processed ingredients have been replaced with scratch-cooked items. A popular crispy chicken Caesar salad, for example, is now prepared with freshly grilled chicken breasts rather than processed products.

Hot foods also have seen an upgrade to make them more appealing. “We always to think about where kids are going after school and what they’re ordering there,” Murphy says. As a result, a new burrito line mirrors the Chipotle experience, with students determining the mix of ingredients.

“We have to be careful to serve a healthier version,” Murphy admits, “so we only serve whole grain rice.” Despite that, she says, students haven’t balked. A pizza line offers vegetarian pizzas, and the hot sub line has limited processed meats in favor of grilled chicken.

At the elementary level, custom-built farm stands were recently introduced to stir up interest in less-familiar seasonal produce not normally seen in school lunches. A staffer will prepare and package portions of the monthly choice and offer them to students, who will receive stickers for trying something new.

These changes have required the purchase of new equipment: in addition to the farm stands, that includes a rotisserie for preparing chicken and freezers for the high school, middle school and several elementary schools. Doing more scratch cooking has also required a bump in hours for existing staff. Fortunately, the increased meal participation has yielded a bigger budget for the department.

Looking forward, Murphy hopes to launch a pre-ordering system for high school students that will allow them to choose meal options in advance and pick them up at kiosks. It will build on a simpler system that already allows parents of elementary and pre-k students to order meals. The department has also launched plans to renovate the high school and middle school cafeterias to create more welcoming environments. Round tables that seat eight would be replaced with a variety of seating and signage would reflect the schools’ mascots.