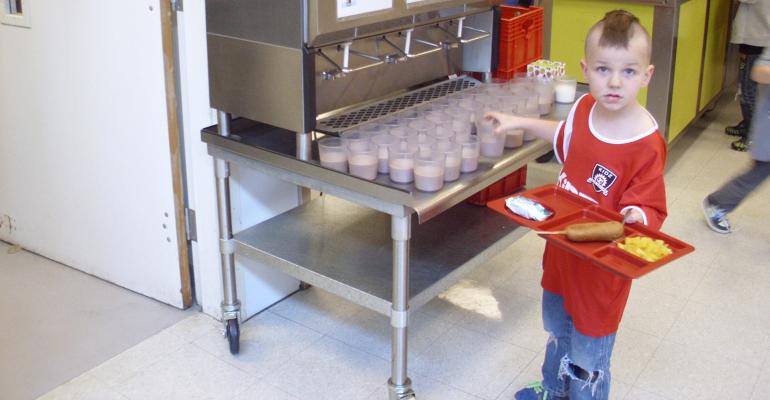 Courtesy of the Olympia (Washington) School District
A student with the milk dispenser.
News & Trends>K-12 Schools

In a waste-reduction program that’s inspiring other school districts, 10 of the 18 schools in the Olympia (Washington) School District have moved from milk cartons to milk dispensers. This move has made a big dent in the problem of wasted milk and thousands of little cartons that are tough to recycle.

The program started small. Twelve years ago, “we had one elementary school that was really big into recycling, and we were approached by a teacher who found out the cartons couldn’t be composted and recycling them is tricky because mold can grow so you have to wash all of them out,” says Paul Flock, child nutrition supervisor.

So the solution of “steel cows” or milk-dispensing machines emerged. It worked well, and over the years more schools in the district have made the switch, with the milk-dispenser program picking up in the last couple of years.

Federal school lunch regulations require that 8 ounces of milk be served or offered, which sometimes led to students taking milk then throwing it in the trash.

“With the lunch pattern now, you have to get a serving of vegetables or fruit with the main entrée,” Flock says, emphasizing that milk is optional. “And then you have a reimbursable lunch whether you have milk or not.”

Now, students can serve as much milk as they would like to themselves, dispensing the amount of milk they want into washable plastic tumblers. In the elementary schools, younger children can get a smaller serving, 4 ounces, which are usually pre-poured for them.

While there are still cartons available for the breakfast program, Flock estimates that 400,000 milk cartons are kept out of the garbage annually.

“This is source reduction; you’re not recycling something because you don’t use it in the first place,” Flock says.

With the help of promotions like this “Just Use a Cup” video featuring a rap song by students, the milk dispensers have gained acceptance quickly.

And after seeing the difference in cleanup, custodians have told Flock that there are fewer spills with the dispensers vs. cartons, something Flock attributes to little hands struggling to open cartons.

There’s a difference in perceived value, too. At one school, students had been complaining that milk in cartons had a bad smell, so the steel cows caught on at that school right away.

Grants from the city and the county have helped to get the program off the ground, Flock says, providing the dispensers, the stands they sit on and the cups, which cost about $4,000 total per school. Plans are underway for all schools in the district to make the switch. Schools that are receiving remodels and updates in the cafeteria will make room for the dispensers in the plans.

The Portland-area School Resource Conservation Network has taken note of Olympia’s success, authoring a study that concludes, “the environmental impact of washing and reusing these cups is far less than that of disposable cartons…milk waste is reduced as students can pour the amount they would like to drink. A typical school using milk cartons wastes around 5-15 gallons of milk per day.”

Olympia’s steel cow program has led a group Portland Public Schools parents to look into establishing something similar in their own district.