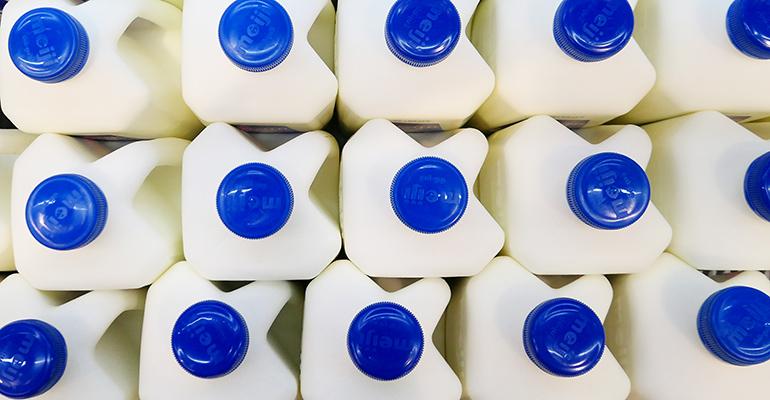 Consumption also up with substitution of reusable cups for disposable cartons in the lunch line.

A milk-dispensing machine that students can use to fill reusable cups with as much or as little as they want has replaced traditional plastic-coated 8-ounce cartons at Bluestone Elementary School in the Harrisonburg City Public School District in Virginia. The results in the early going have included more milk consumption and less packaging waste.

Bluestone launched the initiative in February and has tabulated initial results with the help of a public health practicum intern assigned to the district. Among those results are a 41% increase in milk taken, a 52% increase in milk consumed and a 23% reduction in the amount of milk taken but not consumed, though the volume of milk wasted did show a 14% increase due to the substantially greater amount of milk taken. Meanwhile, the volume and weight of packaging waste were both reduced by about 90%. 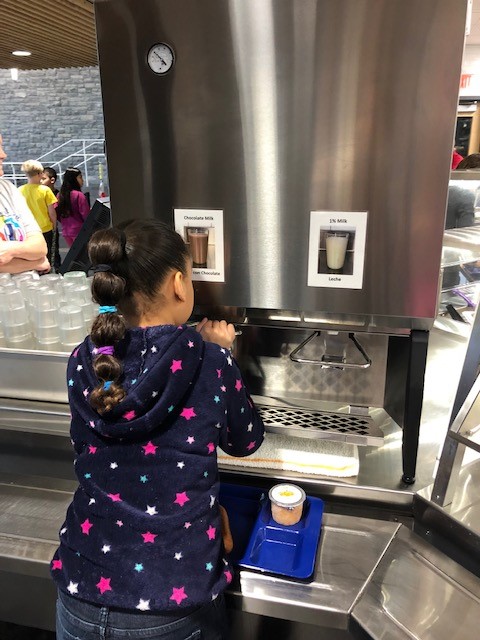 The increased consumption can be attributed to a combination of factors ranging from sheer novelty to higher perceived quality of the milk as it is dispensed fresh and at optimum cold temperature, says Andrea Early, director of school nutrition for Harrisonburg Schools.

“The kids have been really excited about it, especially about being able to mix the chocolate and regular milks, which brings down the sugar content [of the pure chocolate milk] a little,” she laughs. “That’s not something you can do with cartons.”

Bluestone is a new school in the Harrisonburg district that was designed to emphasize sustainability. Its cafeteria, for instance, has reusable serving ware rather than disposables and students select their own fresh produce off a self-serve fruit/veggie bar as part of their meals.

“Students last year looked at what were some remaining sources of waste and [hit on] milk cartons, which they found couldn’t be recycled in our area because they are coated with plastic,” recalls Early about the genesis of the milk machine project. “The principal recalled having a milk machine when she went to school and I knew they were still around because they are used in university dining, for example, so I just had to find out what the regulations were regarding their use.”

What she found was that USDA strongly prefers that all five meal components, including milk, be offered ahead of checkout, which posed a problem as there was only enough space on each side of the Bluestone serving line for one two-valve unit. Early says she would have preferred a three-vale unit so that two of the three can dispense the more popular chocolate milk and reduce the need to switch out the bulk milk containers from which the liquid is dispensed.

That isn’t the easiest thing to do as the five-gallon containers weigh about 40 pounds. While the milk is also available in proportionally lighter three-gallon bags, that would mean even more frequent replacement. Fortunately, the Bluestone cafeteria staff has an individual who can physically handle that task as of now, but it’s a concern, Early admits.

“If we were designing this from the ground up, I would think about going with three spouts with three-gallon bags,” she offers.

Early says she would like to extend the program to other Harrisonburg district schools, but that depends on a number of factors, not least getting buy-in from administration, teachers, custodial staff and, of course, the meal service staff. They would not only have to have a commitment to waste reduction but also be able to deal with operational issues such as making space on the serving lines, having someone capable of replacing the heavy bulk milk bags and have experience with saving the reusable cups from the trash and washing them thoroughly.

“It is not something I would want to push onto a school because it is more work initially,” she says. “There definitely has to be a commitment from all stakeholders.”

Other issues include having a source for the bulk milk packs that meet federal regulations and meeting the upfront cost of the dispensing units. The two purchased for Bluestone cost a total of around $3,000, Early notes, though that is somewhat balanced out by the lower cost of the bulk milk relative to the single-serve cartons.

Following its initial foray into bulk milk dispensing, Harrisonburg made the following recommendations for school decision makers to consider if they want to implement a bulk milk-dispensing system along the lines of that at Bluestone:

• Have a place for the machine before point of service

• Have a place to store cups

• Proper storage and rotation of milk bags regarding expiration dates

• Educate staff on switch to bulk milk prior to implementation

• Promote waste reduction, a better school lunch experience for the students and the ability of students to mix white and chocolate milk

• Educate students on the milk dispensers prior to implementation

• Conduct a weeklong pre study and a weeklong post study, the latter three to six or more months after implementation