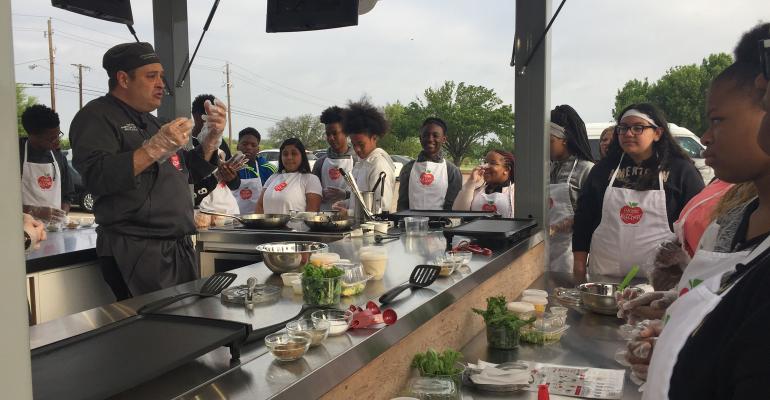 Joyce Sun/Chartwells K12
The Elly sessions include presentations by local Chartwells chef/dietitian teams about foods, nutrition and the connection between food and culture.
News & Trends>K-12 Schools

When Chartwells K12 launched its Elly (“Eat. Learn. Live”) Mobile Teaching Kitchen program about a year ago, it was banking on research that showed that a hands-on, interactive approach to teaching about new foods and how to cook might be the best way to get children not only to learn but also to internalize what they learned in a way that they will remember it and want to replicate it in their lives.

Now there is some evidence that the program may have done just that. According to quantitative research evaluating Elly’s activities, 86 percent of the nearly 2,800 kids who participated in the program said they were more likely to try new foods and nearly 90 percent said they had greater confidence in their ability to cook. The Elly team found kids really like the hands-on part of the sessions.

Inspired by the Teaching Kitchen Collaborative program of Harvard’s T.H. Chan School of Public Health and The Culinary Institute of America, Elly is a custom-designed 80-square-foot shipping container with a fully functioning kitchen complete with three-sided ADA-height kitchen countertop and five individual induction plates. It has been on the road since May 2017, traveling some 3,000 miles across the country and stopping at 16 different sites to give presentations to groups of students in its demo kitchen area (and to others by video linkup). The sessions included both instruction on different foods and ingredients and hands-on food prep activities by a chef/dietitian team. The four-part program focused on food discovery, cooking skills, nutrition education and the connection between food and culture.

“What is really exciting is not just that Elly has been making a difference, but the impact she has on kids,” comments Belinda Oakley, CEO of Chartwells K12. “The feedback has been tremendous, not only from the students but from parents and the teachers.”

One parent tweeted back to Joyce Sun, teaching kitchen manager for Chartwells K12 who travelled with Elly the entire time, that “my son came home after cooking with Elly and he says he’s going to cook dinner every night now.” It was “not only very cute but a validation of what we’re doing, the kind of impact we’re making, that kids are telling their parents about it,” Sun says. “It was awesome to see.”

Surveys were conducted within 24 hours of each lesson to students ranging from grades 5 to 12, and they showed the positive results about willingness to try new things and the confidence to engage in cooking tabulated above. “What we see as the huge benefit in [those numbers] is that they are going home and cooking and encouraging their parents to cook,” Oakley observes. “I think this is a way to shape a community impact. These two pieces of data really give us a lot of hope that we are making a difference in the way an entire generation experiences food and thinks about food.”

As time went on, the Elly team incorporated lessons learned in early stops into its procedures: For example, setup at a new location sometimes took longer than originally envisioned. The team also found that kids often asked more questions than anticipated and were apt to want to get to the interactive part of the session quicker, so time allotments were adjusted to satisfy these preferences.

“It was a challenge at first not knowing exactly what the reaction from students was going to be,” says Sun. “What we learned was that students really love getting their hands dirty and start cooking, so the more time they had doing things, the more engaged they were and the more they got out of it.”

Other adjustments had to be made to accommodate different age levels of different groups, which ranged from middle schoolers to high schoolers. They were also of different skill levels, from high school culinary arts classes to groups of special-needs children.

The program is expected to continue, incorporating the lessons learned in the maiden year-long voyage, says Oakley.

“Now that we have validation that what we’re doing is working, our No. 1 priority is how do we reach more kids more quickly,” she says.

One avenue is a program called Discovery Kitchen, which isn’t a shipping container but rather a “kitchen in a box” that dietitians and chefs at sites can quickly assemble just about anywhere to use in making presentations.

Meanwhile, the full-fledged Elly program’s next step is not definite yet, but Oakley seems determined that it will be something that builds on the success of this year’s program.

“We have 4,000 schools around the country and we don’t want them to have to wait 10 years to see Elly,” she says. “We want teaching kitchens to be alive and making a difference next year in all of our schools. That’s really what we’re working on.”