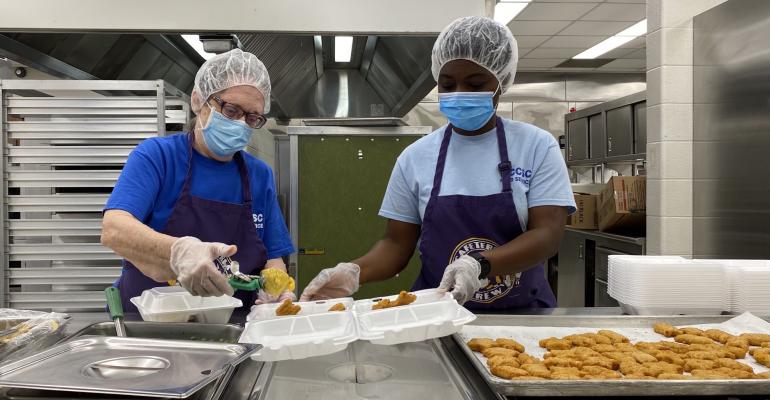 MCCSC Nutrition Services
MCCSC kitchen employees assembling hot entrée meal containers. With no self-serve or serving line bulk items, everything has to be pre-packaged even if students get it in the cafeteria.
News & Trends>K-12 Schools

Indiana district found efficiency in 5-day meal packs of meal components that families pre-order and then prepare as needed.

Getting meals to remote learning students has challenged many school foodservice departments. Some have opted for daily pickup or even delivery service, but many have found that multi-meal packs dispensed once or twice a week is more practical and efficient than daily service, especially given the cost pressures many K-12 meal programs currently deal with.

That was the case at the Monroe County Community School Corp. (MCCSC) in Indiana, which encompasses the city of Bloomington and surrounding suburbs. The district has an enrollment of around 10,500 and operates 21 school sites, including four high schools (two traditional, one alternative and one tech), three middle schools and 14 elementary schools. The district footprint, which encompasses the main Indiana University campus, is moderately affluent with a pre-COVID free/reduced percentage of around 32%.

Last fall, MCCSC fluctuated with various attendance approaches depending on community virus infection rates, but this spring it has gone to requiring parents to choose either 100% in-school or 100% remote for their children, with around 70% opting for in-school. That does make things a little more predictable for the meal program, though it still has to operate two different kinds of service.

While in-school feeding at MCCSC has adopted a streamlined, modified approach based to an extent on traditional models, remote learners have seen an evolving approach to meal service based on participation levels and department financial considerations, explains Hattie Johnson, director of nutrition services.

“We started with daily pickup and everything cooked and ready to go, but then when they came out with the pandemic EBT cards that gave families money to go to store, counts started dropping, so we transitioned to weekly pickup,” she offers. The weekly packs have to be ordered online and include five breakfast and five lunches. 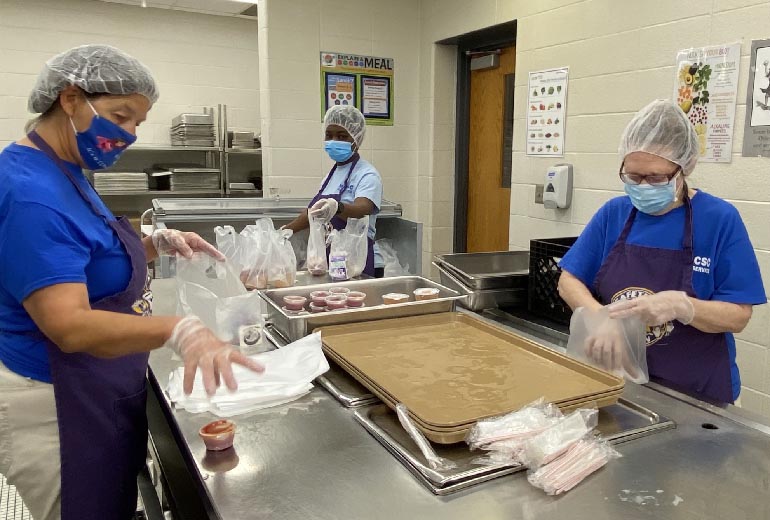 The MCCSC nutrition services department has been challenged by supply issues relating to the disposables and packaging, for which it has to compete with commercial restaurants and their extensive takeaway programs.

In addition to the meal distribution schedule change, the nutrition services department also transitioned from offering ready-to-eat meals to packages of meal components “with some assembly required,” Johnson quips. This meant families had to do not just retherming—obvious with a hot dish picked up days in advance—but also putting components together and even doing some rudimentary cooking, such as boiling dry pasta. For burgers, the meal pack includes a frozen patty that must be cooked along with the bun and a slice of cheese if a cheeseburger is preferred.

The detailed instructions included in each meal pack have not only preparation directions but storage info on what to keep in the fridge, the freezer and the dry pantry.

Johnson says the reason for this approach is cost—for instance, pre-cooked pasta is just too expensive, hence the dry alternative—but every effort is made to make things easy for the recipient family while remaining operationally and fiscally feasible for the nutrition services department.

“We do a menu of items that are easy to prepare but also predominantly things that we can store frozen,” Johnson explains. “For example, for cheese lasagna day we buy a frozen cheese lasagna and sauce and instructions how to retherm and assemble them, as well as the pre-portioned frozen green beans and breadstick.”

The change wasn’t immediately popular with everyone, she admits.

“Some people complained because they wanted ready-to-eat but, frankly, it was too problematic to deal with feeding the kids in the schools while also having people showing up to pick up their to-go meals at the same time. It was too much stress and pressure on the staff, so we went to weekly [pickup] and frozen where you’re just going to have to do some work at home to feed your kids.”

Pickup at any district site makes the remote learner meal kit distribution process a bit easier for families, many of whom do the pickup at another site than the one their child usually attends because it is located more conveniently. The online order form has a field for designating the pickup location, but meals are not logged as served for reimbursement purposes until they are picked up.

Failure to pick up ordered meal kits isn’t a huge issue—just a handful each week—and repeat offenders are warned that the kits may not be assembled for them when they show up if they’ve missed too many pickups. Occasionally, a meal is picked up outside the designated windows—Johnson says they are held at least through the weekend before being broken back down and the components returned to district storage. 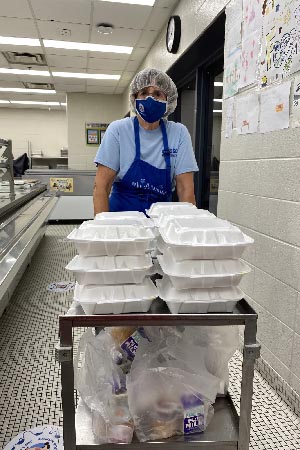 Photo: A delivery of in-school meals heads to a classroom using clam shell containers for hot items and clear bags for cold and shelf stable ones.

For in-school feeding, most elementary students eat both breakfast and lunch in the classroom, picking up breakfast packs as they get off the bus in the morning and either going through the cafeteria serving line in batches or getting them delivered to the classroom by education aides or nutrition services staff. One middle school operates like the elementary sites with the in-class dining while the other two have students go through the lunch line and then eat at designated spaces in either the cafeteria or other areas around the building, the approach also taken by the high schools.

In-school lunch service at the high schools began the year with only a single daily entrée choice—a drastic reduction from the half dozen routinely offered pre-pandemic—though that has now been expanded to three a day.

“As things have gotten better, we also found ways to do it better,” Johnson says. The approach now is to have one daily entrée choice district-wide and then have each individual manager determine the two others from the district recipe database based on their school’s demonstrated preferences. In addition, the district has also been reintroducing a la carte options to the middle and high schools, historically an effective way to generate additional revenues, especially in more affluent districts. The other major traditional extra revenue generator—catering—remains sidelined, Johnson laments.

Other issues she’s had to deal with have including staffing and supply reliability.

When COVID-19 hit in spring 2020, a number of veteran employees with sufficient years of service to do so decided to retire, reducing overall staff experience levels. Then, a plant opened up nearby to produce the Moderna vaccine that drew away other employees and potential employees because the district couldn’t compete with the wages it was offering.

“They started hiring like crazy and so we lost another wave of employees because Catalent was paying more than we paid,” Johnson notes.

Meanwhile, the program’s traditional reliance on reusable trays, plates and utensils was forced to change to disposables due to safety concerns, which then meant competing for those products.

“We were trying to source disposables at the same time that restaurants were reopening and were doing only carry-out when they reopened,” Johnson recalls. “Supply was horrible! Supply is still bad—it’s better, but still bad. If I can get through a week where I had the menu work the way I planned it, it’s like a good week and we’re excited, but our temp-outs continue to be ridiculous. We always had some out-of-stocks, but in-stock would hover at 95-97% and now it’s nowhere near that!”

Meanwhile, the department’s overall procurement approach changed even as manufacturers were streamlining their product offerings to deal with their own labor and procurement issues.

“If we have to package these to-go [meal kits], we need as much of it individually wrapped and ready to go as possible so that we have the time to make up all the bags,” Johnson explains. “That was definitely a switch because that was not how we shopped before. Then, even if it was a convenience item, we wanted to display it to appear as if we made it, so we were buying things in bulk and doing as much speed-scratch cooking as we could. Now, all of a sudden, it’s like, ‘Can you give me that rotini sauce with the pasta already in it so we don’t have to cook it?’ I think we just flipped this segment of the industry upside down given how suddenly had to change!”