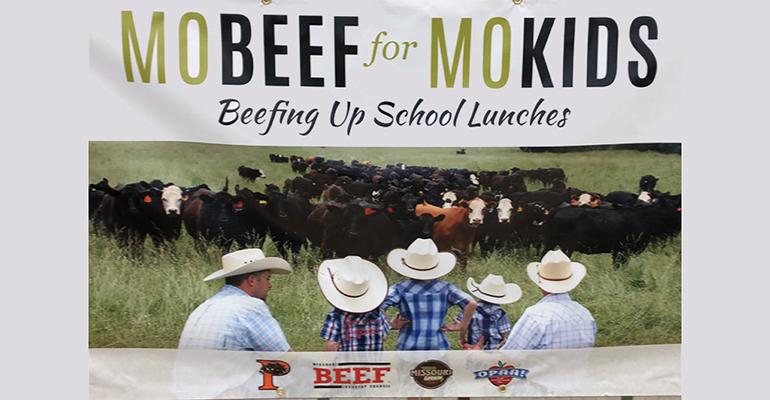 Through the MoBeef for MoKids program, local ranchers donate beef – and the district saves money.

Students are eating more beef in the Palmyra R-1 School District in Missouri. In the three-school system, kids from kindergarten to twelfth grade have been offered more scratch-made entrées in their school lunch program such as beef and cheese quesadillas, meatloaf and roast beef melts since the start of this school year.

Heather Rice says the story behind the beefed-up menu goes back to a conversation she had with local cattleman Ken Disselhorst, who asked if she would be interested in serving local beef to students.

Related: Should you worry about the grass-fed beef supply?

Rice, the director of nutrition services for the district, was definitely interested.

Disselhorst, a member of the Lewis and Marion County Cattlemen’s Association, was proposing a partnership with the MoBeef for MoKids program, a joint effort between the Missouri Department of Agriculture, the Missouri Beef Industry Council and Opaa! Food Management, which runs the district’s food service program. 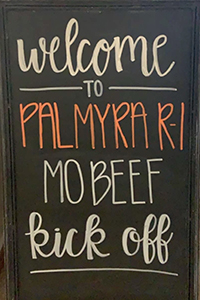 The Palmyra school board signed off on the program in March. Other logistics included a plan for deliveries and insurance for the butcher shop, details that the program helped facilitate.

By the time students were filling the halls in late summer, the district was serving chili beefsteak sandwiches, spaghetti and meatballs, and other meals made with beef from their first donor, Lehenbauer Farms.

Designed to “increase the amount of Missouri-raised beef on the school lunch menu,” the program recruits local cattle ranchers to donate a whole animal to a participating school district. The program coordinates with a local butcher to process the donated meat. 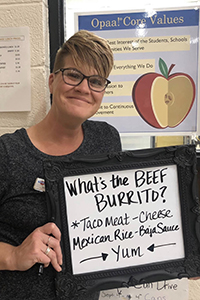 Opaa!, which has been the food service contractor in Palmyra for more than a decade, covers the processing costs. Once the meat is ready, Rice picks it up herself. Since they began, she has received a shipment of beef from a new animal about once every two months. When they’re running low, Rice contacts the program to request another animal and the program initiates the process of animal donation, butchering and processing.

The staff tracks student participation as part of the program. Out of a total enrollment of about 1,100, the district feeds approximately 850 students each day. That number reflects a moderate increase in lunch participation since they implemented the program.

Participating districts also educate students about beef and the farm-to-fork pipeline. In the cafeteria of each Palmyra school, a MoBeef for MoKids banner and a poster about the ranchers who have donated the beef are on display. In addition, the program offers posters, brochures and a “Basics About Beef” resource for classrooms. Though they haven’t used the classroom materials yet, the high school FACS (home economics) class had a cheeseburger cook-off and a lesson about beef.

Because the Palmyra district already had large walk-in freezers at the high school, they were a good fit for the program. Enough cold storage for large shipments of beef is a requirement for participation. Rice keeps the majority of the beef at these central freezers and transfers smaller amounts to the middle and elementary schools as needed. Each school prepares food separately. 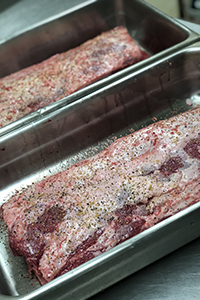 Photo: Participating districts, such as Palmyra, need to have the capacity to store large amounts of beef in cold storage. Heather Rice, director of nutrition services, said recently that the district was “sitting on about 900 pounds of local beef.”

In December, Rice said the district was “sitting on about 900 pounds of local beef.”

Districts also need to have the capacity to handle raw ingredients. The Palmyra district was already creating entrées from scratch so they were equipped to handle the fresh ground beef, eye of round roast and chuck roast from the butcher.

Employees in the district kitchens say they prefer working with the local beef, reporting that it feels less waxy and smells fresher than beef they prepared previously. Rice says it’s encouraging the staff to create more scratch entrées, such as beef stew and barbecue beef on a bun.

“We're bringing back things you don’t see on lunch menus anymore,” says Rice.  “Homemade country cooking – the beef is really bringing that back.”

To celebrate the partnership, the district hosted a kickoff dinner in September with cattlemen, representatives from the program and the media. Later in the fall, the MoBeef Program continued to raise community awareness by sponsoring a float in the high school homecoming parade.

Asked if she thinks the program is sustainable, Rice replied that she wouldn’t have agreed to it if she felt that the ranchers weren’t committed to the long-term viability of the partnership.

“We couldn’t do it without the cattlemen, that's for sure,” Rice says. “It’s pretty awesome and rewarding for them to know that they’re feeding our whole school district locally grown beef.”

And how does Rice feel about how the program is going?

“I just believe these kids deserve to have the best. And locally grown is pretty awesome.”