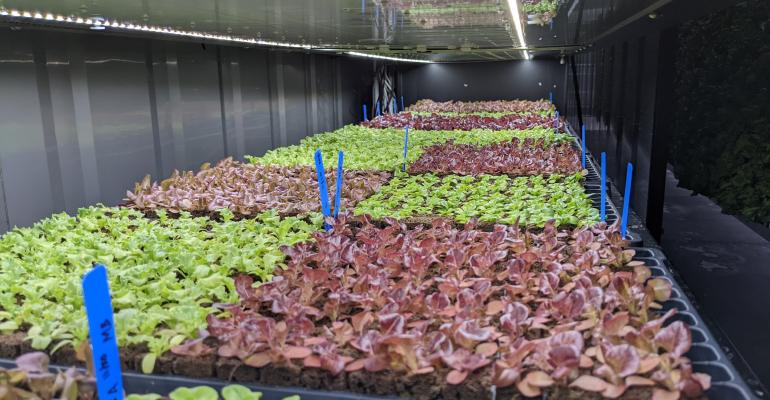 When Michael Jochner worked as a chef in Google’s famed in-house dining program, fresh ingredients were readily available and plentiful, budgets were generous and menu creation was the exclusive province of the culinary team. Today, Jochner serves as director of student nutrition & records retention for the Morgan Hill USD near San Jose, overseeing a public school meal program where product procurement can be challenging—especially these days—budgets tight and regulations governing menus much more strict.

Nevertheless, Jochner is making progress in introducing more ultra-fresh ingredients to the district’s some 8,400 students, most prominently with a Freight Farm hydroponic vertical farm enclosed in a shipping container that now provides over 60% of the greens used on salad bars at Morgan Hill’s eight elementary schools as well as lettuce for composed salads served in the high schools—including a special red leaf variety that is the base for the popular Sobrato Caesar Salad served at Ann Sobrato High School, where red is also the school color.

Related: Metz rolls out new dishes and education events for the 2022-23 school year

Like the other 12 school sites in the district, Sobrato has its own kitchen, one of the changes Jochner has implemented since he joined Morgan Hill USD five years ago after a career that included stops at some high-end French restaurants and a high-end French bistro, as executive chef at a private country club for seven years and then another seven years as a chef with Bon Appetit Management Co. at Google’s corporate dining program in its Mountain View headquarters.

“I dismantled the central kitchen idea and now have basically 13 semi-independent sites running, where we do some speed-scratch, some scratch and some [individually wrapped pre-made],” Jochner reports regarding his school meal program at Morgan Hill USD. Currently, given supply chain challenges, about a fifth of the total is scratch.

Another major change was the salad bars…

“Shortly after I took over, we started to bring back fully fresh salad bars at all eight elementary schools and then I launched chef salads at all the high schools,” he notes.

The elementary schools and the two district middle schools get two lunch entrée choices a day, one usually a meat option and the other primarily vegetarian or vegan, an area Jochner is especially familiar with as he ran Google’s only vegan café for about a year. Meanwhile, the high schools usually offer five different entrees, depending on staffing, with at least one being vegetarian or plant based. The district meal program runs on a one-month cycle.

While the central production kitchen approach has been discontinued, the two traditional high schools (there is also a continuing education site offering grades 10-12) still serve as receiving points for major deliveries from prime vendors and suppliers of major categories like dairy and produce. The high schools then make deliveries five days a week to the other sites based on need, and these deliveries include lettuce from the Freight Farm unit.

That lettuce is not only fresh but literally still alive as the heads are harvested with roots intact. They are then boxed up and delivered to individual school kitchens, where kitchen shears are used to cut the lettuce from the head as needed for the day’s anticipated volume and then served with crispness, flavor and visual appeal intact.

The Freight Farm unit turning out the lettuce is located at Ann Sobrato High School, where it is literally 30 feet from the kitchen, put there because it already had a quick link to utilities and because the school is centrally located, making delivery to other sites around the district easier. The district hired a farmer to run the Freight Farm, which only requires about 20 hours a week according to the company, leaving the farmer free to help with other projects.

An education tool as well as a farm

A hydroponic farm in a shipping container also has potential as an educational tool, Jochner notes.

“The initial purchase was during COVID so there weren’t any kids on campus,” he explains. “However, we’re starting to develop some educational pathways with Next Gen science standards, but It’s really at its infancy now with the high school ag teachers just starting to use it. We’ve also had the environmental club at one of our elementary schools come and take a little tour of it with their parents, and we’ve done some impromptu Zoom meetings from the farm to a classroom, but we’re still just trying to figure out how we want to use it educationally.”

One thing he knows for sure is that experiencing the farm has great impact and great potential for promoting the idea of freshly grown produce.

“Just walking into a shipping container that’s got a nine-foot tall, 30-foot long wall of lettuce is inspiring,” he says.

The Freight Farm unit was installed last October after Jochner convinced the school board to approve the unit’s $150,000 cost, which he looks to pay back on an eight-year ROI primarily through procurement savings, especially if the price of lettuce escalates (one recent report he cites had Salinas Valley facing a potential lettuce shortage in November, "so we’re ahead of that one!”). He was convinced that Freight Farm was practical because he already had experience with it at Google, which was one of the first adopters of the system.

“The district and I felt like the technology had proven itself,” he explains. “Some of our numbers have shown that we are growing lettuce with the labor included for less money than it would cost us just to purchase it.”

His goal of meeting 100% of district lettuce needs with Freight Farm production was recently advanced with the purchase of a second Freight Farm unit, which is scheduled to arrive at the district’s Live Oak High School in November. Like the one at Ann Sobrato, it will grow only lettuce—Green Butter, Rouxai (red oak), Sweet Crisp and Skyphos (red Boston butterhead) for the spring mix blend and a mini red romaine for the high schools.

Jochner says he is focused on lettuce because he considers it “the heart of the salad bar,” with self-production of other components to follow.

In fact, the next step in self-producing those other components is already underway at a 40-foot greenhouse located at one of the high school sites that was in disrepair and not being used when Jochner discovered it. He concluded “basically a handshake deal” with the ag department to use it for one year to grow cherry tomatoes and cucumber for district salad bars.

“We just finished renovations on it and we’re starting to plant the cherry tomatoes and cucumbers this week,” he says. “We’ll use a Dutch bucket system that is another hydroponic technique and we’re hoping to produce about 20% of our district’s cherry tomato and cucumber needs for salad bars with it.”

That site also includes a smaller nursery greenhouse with 15 raised beds and a little tented learning area that Jochner hopes to expand, plus a barn sitting on two acres that is used by the local Future Farmers of America for livestock raising. Behind that is an additional 12 completely undeveloped acres.

“I’m looking at some larger grants through the county and state to conceivably develop that into an orchard with some row crops and do full-on regenerative farming out of that land as well,” he suggests. “I think the farm is the first piece of a much larger puzzle.”

All these possibilities are energizing a second career for Jochner, who has been “a chef my whole life” in high-end dining environments around the Bay Area until he reached a point of career satiety about five years ago.

“I had cooked enough food in my life and done enough wine dinners and country club festivals, and decided I wanted to do something different with my chef hands,” he recalls. “I jokingly told my wife I’d even be willing to be a lunch lady!”

Apparently she took him seriously because she did a job search and came up with the opening for the director position at Morgan Hill USD, which Jochner decided to apply for despite admittedly knowing “nothing about school food. My selling point was that I know how to cook food and have a feel for what people like and felt I could make a change.”

This December will mark five years since he made the change to join Morgan Hill USD and it doesn’t sound like he regrets one moment of it. He says his priority is reaching the very young, the first and second graders who have yet to develop their dining habits and who would be most open to his message.

“I fell in love with the idea of helping the next generation eat healthy food!” he declares.