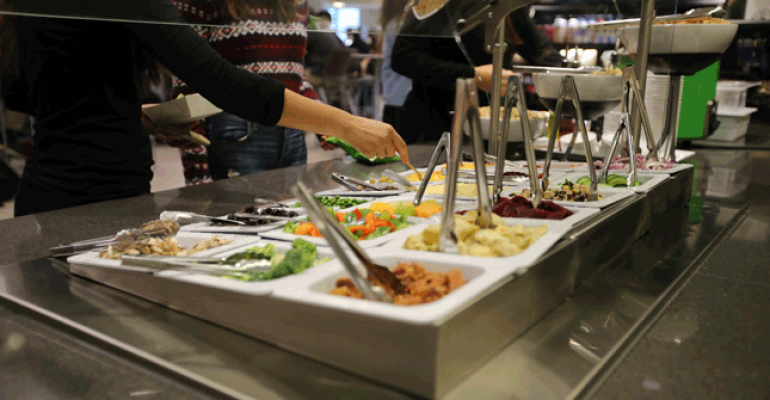 <p>The Good Greens fresh food bar offers a &ldquo;Whole Foods-style&rdquo; array of fresh fruits and vegetables among the self-serve choices students can use to build their meals.</p>
News & Trends>K-12 Schools

When New Trier High School in Illinois decided to upgrade its in-house dining facilities, it didn’t go halfway. A new cafeteria, part of an $85 million renovation project that saw a good part of the building overhauled and modernized, opened this fall under the management of Quest Food Management Service. The new eatery resembles a college dining center, with six serving stations dispensing dishes made mostly to order.

There is also a coffee/smoothie bar with a $40,000 espresso/cappuccino machine (provided by Quest, not the district) that remains open all day to serve staff as well as students. Because New Trier is not enrolled in the National School Lunch Program (NSLP), the menu can be more flexible but that doesn’t mean unhealthy, says Quest president Nick Saccaro.

He cites, for example, the Good Greens “Whole Foods-style fresh food bar,” one of the six stations, that has a very expansive selection of fresh fruits and vegetables. The other five emphasize fresh ingredients and preparation, he adds, in accord with the company’s philosophy of preparing items as fresh as possible when served.

Related: Take a photo tour of the operation

“We’re not doing any heat-and-serve except for a few convenience items,” Saccaro says. “On our Italian station, for example, everything including the crusts are made from scratch and almost everything on all the stations is assemble-to-order or made-to-order.”

Such a time-intensive approach is only possible because New Trier has three unusually long 40-minute lunch periods, with about a third of the 3,000 students being served at each.

“We get the kids through in 10 to 13 minutes,” Saccaro says, adding that participation has been strong so far despite an open campus that allows students to go offsite for lunch.

“The rush, I’ve never seen anything like it before,” he says. “Having a thousand kids coming in three times like that.”

Quest began its partnership with New Trier in the 2015-2016 school year and immediately boosted sales by more than $200,000 and participation by 12 percent in its first year, Saccaro says.

The fact that the participation numbers have been strong early in the year, when better weather traditionally prompts more wandering off campus for lunch, is especially encouraging.

“The students are willing to wait a bit longer than last year [when the space was an ‘old and tired’ traditional high school cafeteria] because of the assemble-to-order [approach] and the quality,” Saccaro notes. “The quality is not something they’re going to be able to replicate in [commercial establishments in] the community.”

As for value, the typical meal, depending on the choices, ranges between $3.75 and $4.50, which is certainly less than similar offerings from commercial restaurants, especially with generous portioning made possible because the program is not bound by NSLP restrictions.

Saccaro admits that the program is only made possible by the extended lunch period: “If it were a 20-minute lunch period, we certainly couldn’t do this, but then I don’t know we could make any kind of lunch period work in 20 minutes with a thousand kids coming in at a time.”

In addition to Good Greens, which is self-serve, the other five stations provide a range of dining options. Crust offers to-order pizza and pasta dishes, while Grill is the place for burgers—including turkey and veggie burgers, as well as chicken sandwiches and fries. Bread & Bowl is the deli station with made-to-order sandwiches and paninis, while Picante operates under the commercial Chipotle chain’s made-to-order Mexican food approach, and Hemispheres offers made-to-order stir-fry as well as fresh sushi.

Because so much of the food is customized to-order, the menu remains fairly static though the stations do offer some daily specials as options.

The station concepts are ones Quest already had developed and deployed at other locations, but they have generally been taken to a new level at New Trier.

“Because of the equipment set and the talents of the culinary team, I would say we have a much more broad execution of the concepts than we have at other locations,” Saccaro offers.

The coffee bar keeps busy all day serving not only coffee drinks but also smoothies that are low in sugar because they use a lot of fresh fruit that can be supplemented with high-protein additions like peanut butter and whey protein.

“The cool thing about it is that we’re open basically all day long—not every station, but usually something—and because of the design of the space it has more of a student union feel than a cafeteria feel,” Saccaro says. “So we have students hanging out, socializing and doing homework all day. We’re seeing students come and frequent the space two and three times a day.”

New Trier High School serves grades 10 to 12. Freshmen attend a separate facility located several miles away with its own dining facility that is more antiquated than what’s now available at New Trier High.