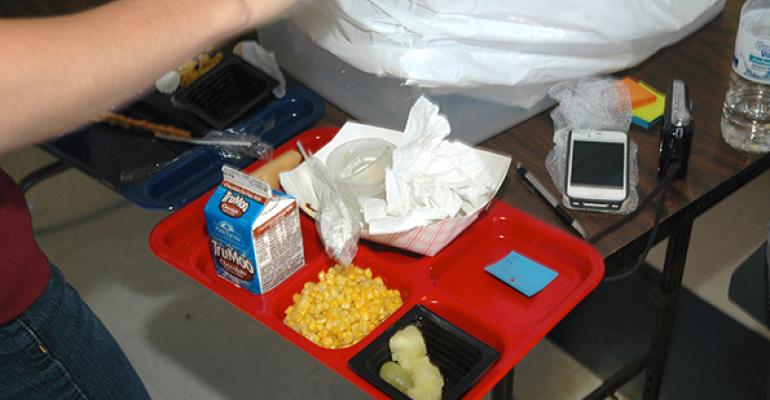 <p>A colored sticker on the food tray identifies the vegetable entr&eacute;e on the menu for the day.</p>
News & Trends>K-12 Schools

Reducing plate waste and encouraging students to eat their veggies might come down to the right pairing of food.

Plate waste is a well-known and documented problem in school cafeterias. Ensuring students eat the vegetables served during school meals is another struggle for school operators and nutritionists. A new study looking at how school lunch entrées and vegetables are paired might help tackle both issues.

Food pairing often brings to mind wine recommendations on the menu at upscale restaurants, but researchers at Texas A&M University wanted to study food pairings at school cafeterias. They found school meals paired with popular vegetables are less likely to wind up in the garbage bins. The authors recently published their findings in the journal Food and Nutrition Sciences.

“That relationship [between pairing and plate waste] was pretty evident, even among all the different combinations that we sorted through,” says Dr. Oral Capps Jr., an AgriLife research economist at the department of agricultural economics at A&M and the lead author of the plate waste study.

Capps and his team measured food waste in three elementary schools in Bryan and Dallas, Texas.

The plate waste study was funded by the Alliance for Potato Research and Education. Although the study found that students prefer and waste fewer potatoes in various processed forms (mashed potatoes with gravy, oven-baked french fries, tater tots and potato wedges), Capps stresses his independence on the study. And students' preference for potatoes will certainly come as no surprise to most school cafeteria operators.

During the study, data was collected by the percentage of food waste of both entrées and vegetables rather than using total food waste or visual inspections of lunch trays as has been done in past studies, Capps says.

Because the study could not influence what students ate or the preplanned menu at each school, the process to collect food waste was performed by “an elaborate team” of “food warriors” or Texas A&M students. A minimum of eight workers was needed at each school. When students went through the lunch line a sticker was placed on their tray identifying what entrée and vegetable combination they had chosen.

Some popular pairings that resulted in less waste were classic combinations: french fries or tater tots with hamburgers or cheeseburgers. Not even a filling meal like a burger could keep students from eating their favorite vegetables, the study found.

But some successful pairings, which resulted in less waste, surprised Capps. Broccoli florets served with a hot dog on a bun was on the least wasted 10 pairings list in the study, although the hot dog was a popular choice for students and broccoli was not a popular vegetable. This outcome might have something to do with the less-filling hot dog entrée, Capps says.

Some pairings that contributed to greater plate waste were only obvious in hindsight. When a popular and filling dish like a mini sub sandwich was paired with green beans, the green beans were often thrown in the trash.

But hope was not lost for the unpopular green bean.

“Green beans were wasted the most when paired with chicken nuggets—the most popular and least wasted entrée, pre- and post-implementation,” the study’s authors wrote. “However, when green beans were paired with steak fingers—a less popular entrée—plate waste of the vegetable was reduced.”

In other words, there’s more research to be done, Capps says. But one thing is clear: “Getting children to eat more vegetables is still a very complex thing to do,” he says. “But it might help if they are paired appropriately.”