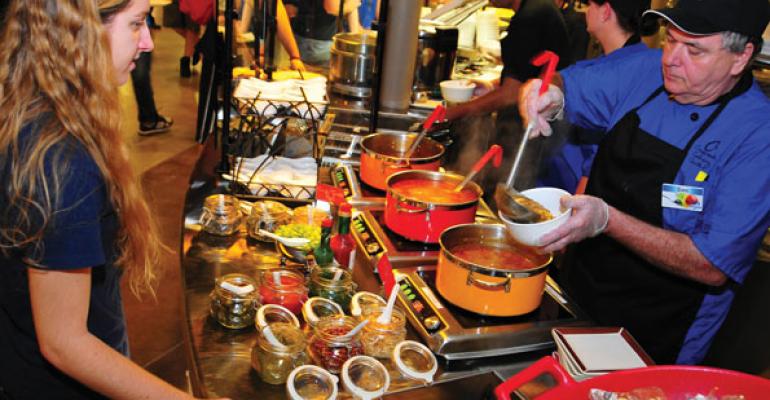 The Global Noodles concept at the University of Buffalo has been one of the most popular additions to the new Crossroads Culinary Center.
News & Trends>K-12 Schools

“It’s the right time in the marketplace for noodle stations,” says Brent Beringer, resident district manager of the University of Virginia Dining/Aramark, where its In the Nood concept has become the crown jewel of the new dining hall. “You can do exciting things for a low cost and customize offerings to please everybody.”

The Asian street-food trend is ripe for the picking, agrees Steven Burke, a department chef who is in the process of taking the K-12 set in Austin Independent Schools from predictable Chicken Teriyaki bowls into the next phase of noodle trends: pho, udon and ramen bowls.

“I predict that noodle bowls will be in schools all over the country in three years time,” Burke says.

“Food trends always start with what’s hip on the coasts (and in Austin, of course), then it gets to the mainstream, then fast food restaurants, and then schools.” He’s aiming to fast-track that process, wrangling with meal pattern requirements and searching for whole-grain noodles.

You can offer made-to-order noodles only on a weekly basis, as the cafe at UCLA Medical Center does, or go into full-on noodle mania, like the University of Buffalo, where GM Laura Brantley offers this noodle advice:

“Throw yourself into it,” she says. “You have to experiment, be really flexible with the ingredients and have fun doing it.” And fun aside, “students see it as a fresh, healthy option. They want to be able to customize, and that builds the excitement level.”

There, Janette Martin, assistant professor in the McIntire School of Commerce, was happy to have her class tackle the assignment of creating a new concept. Initially it was hypothetical, but the pitch was so great, it became reality.

The business school students came up with In the Nood, a noodle concept that features digital menu boards (“so we can change the menu on the fly,” Beringer says), a trendy urban design and big band music. The noodle cuisines focus on Asian, Italian and American flavor combinations.

Pad Thai, one of the all-time great noodle bowls of the world, is the number-one seller, followed by Fettuccini Carbonara, a somewhat decadent bowl of bacon, peas, caramelized onions and creamy Alfredo sauce. Protein options for all the noodle bowls include chicken, tofu or shrimp.

“The big thing is to not get caught up in one genre,” Beringer says, citing a surprise hit noodle bowl, the Fresh Mushroom Steamed Vermicelli, a briny delight with capers, lemons, tomatoes and black olives. Lobster mac and cheese has also been a huge hit, although Beringer warns not to get “too bogged down in comfort food.”

One noodle bowl order takes about three minutes, start to finish. It’s fast-casual style: a student will order at the counter and take a beeper to know when it’s ready. The expediter cooks facing the dining area, making use of a six-burner stove and cold wells. One tip: “Using fresh pasta saves cooking time,” Beringer says.

The station has a large to-go following, and offers spill-proof, sturdy, reheatable and reusable plastic containers with a snap-on lid.

All dishes are available in half or full sizes, and there are plenty of interesting items that complement the noodle bowls, like a leafy green pear walnut salad. There’s even a gluten-free option: whole potatoes are spiral cut so they resemble fettuccini.

Green tea cheesecake and other creative desserts round out the station, and it’s been a very popular attraction.

The only downside is that the original business school students had graduated by the time it was fully implemented. But they’d be proud that new students are wearing super cool T-shirts with the slogan “I Eat in the Nood.” And, Beringer reckons, it could be a great way to get alumni back for a visit!

Working with the K-12 Meal Pattern

The fun, slurpable quality of noodles is a natural for K-12 dining. At the Austin (TX) Independent School District, Department Chef Steven Burke is testing a noodle bar that goes beyond the familiar chicken Teriyaki and into trendier pho, udon and ramen territory.

The test station, now at just a few of the district’s almost 120 locations, allows children to customize their noodle bowls with their choice of veggies, noodles and different sauces.

“We currently have a made-to-order stir-fry line with some rice and some noodles and chicken and beef,” Burke says. “But I don’t like the mundane. I want to do what’s trending now.”

The obstacles: food waste associated with stir fry/noodle stations; the meal pattern (proteins and veggies, how to ensure the right amount is going on each plate); batch cooking so the food remains fresh; and locating good whole-grain noodles in the trendier styles.

Burke has learned that separating the veggies from the protein cuts down on waste, and also makes it easier to determine that the correct amount of protein and vegetable is going into each school meal, per the new requirements. This also allows for vegetarians to be accommodated.

“I’ve been having trouble finding whole grain noodles,” Burke says, adding that he has a lead on such noodles and will be testing to see how the students like them.

In the meantime, he’s come up with an ingenious way to batch cook a few vegetables at a time.

“Instead of a wok, we heat just a couple sheet pans of veggies at a time in an impinger oven,” he says. This allows for control over the amount of vegetables needed to replenish the line.

With international students representing 18 percent of the population at the University of Buffalo, noodle authenticity was a big focus for the Global Noodles concept at the new Crossroads Culinary Center.

This independent operation decided to go with a plug-and-play noodle program from Minor’s and Nestle Professional that has a strong soup component and allows for a lot of customization and quick menu changes.

“We start with bases that have very authentic flavor, and that gives us more consistency,” says Lauren Brantley, general manager. The bases are a total blank canvas: the corresponding ingredients are laid out for the choosing: noodles, vegetables and protein.

Both international noodle bowls and down home favorite soups like corn chowder have been doing very well. Asian flavors and ingredients like edamame and bamboo are well represented, but there are also some unexpected dishes.

“The North African bowl has yams, black beans, roasted corn, potatoes carrots and peas,” Brantley says, adding, “It’s a good vegetarian station. There is a vegetarian broth and there’s always tofu.”
Feedback from vegetarian students has been positive. They see the station as a place where they’re not necessarily at a “vegetarian only” station.

Every Friday at UCLA Medical Center’s dining commons is build-your-own noodle bowl day. It’s set up at a station that features other Asian menu items, and Executive Chef Gabriel Gomez says the seafood broth makes a big difference in the flavor. It’s simmered for hours ahead of time with shrimp shells, various Asian spices, a clam base, miso and chile peppers.

That broth serves two purposes: It adds flavor and also heats up the items in the bowls. The customers can choose either “everything” in the bowl or item-by-item. They start with Udon noodles, and can have any combination of shrimp, crab stick, salmon and baby bok choy.