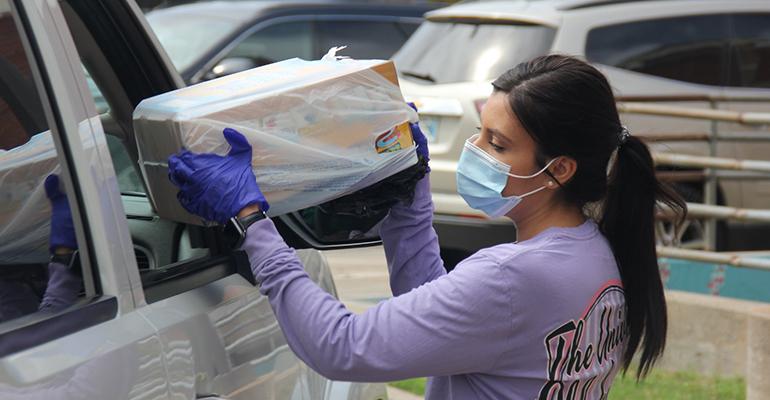 As they welcome students back, Oklahoma City Public Schools relies on a flexible staff to implement both curbside and in-school meal delivery.

Nutritional staff for Oklahoma City Public Schools had to think quickly when the pandemic hit. Like many districts across the nation, they soon began a daily curbside meal pickup program to serve the 45,000 students in their 62-site district.

Between late March and early May, they delivered more than 890,000 meals. At first, all meals—which included just breakfasts and lunches at the time—were served cold. But soon they began to explore ways to deliver hot meals that were both appealing and safe.

Shonia Hall, director of school nutrition services, says the staff experimented with different packaging options and the flow of food preparation and delivery to get meals from school kitchens to hot boxes to cars to bellies.

They soon discovered that the clamshell containers they were using could not stay in a hot box longer than 15 minutes without starting to melt. They also found that certain meals, Frito chili pie in particular, didn’t look appetizing—and sometimes didn’t survive the drive home—in the containers.

But they kept trying. They soon settled on a cooking system that delivers meals to the curb using an assembly line method: They batch-cook meals, package and deliver them to the curb in spurts so the next car in line always has a hot, freshly cooked meal that doesn’t have to sit too long.

And they solved the packaging puzzles. They deliver chili pie and macaroni and cheese in six-ounce foam bowls, wrap pizza slices and corn dogs in aluminum foil and package items like grilled chicken wraps in plastic or foil. They pack cold items separately. 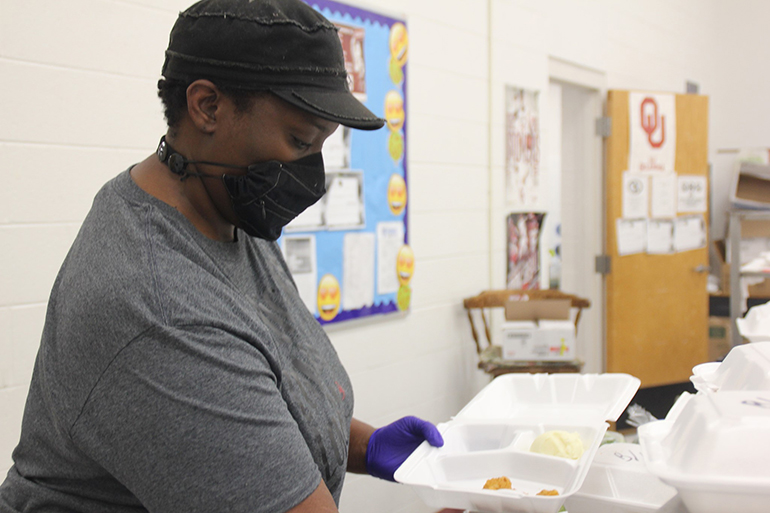 When school started in September, they continued with curbside pickup, available between 10:30 a.m. and 1 p.m., Monday through Friday.

Hall, who also serves as vice president and public policy chair for Oklahoma School Nutrition Association, says theirs is a CEP district. This summer, she and others advocated for an extension of the Summer Food Service Program and Seamless Summer Option. It worked.

In September, they expanded the meal program to include lunch and supper. On weekdays, any student age 18 and under can pick up three meals and a snack to take home. 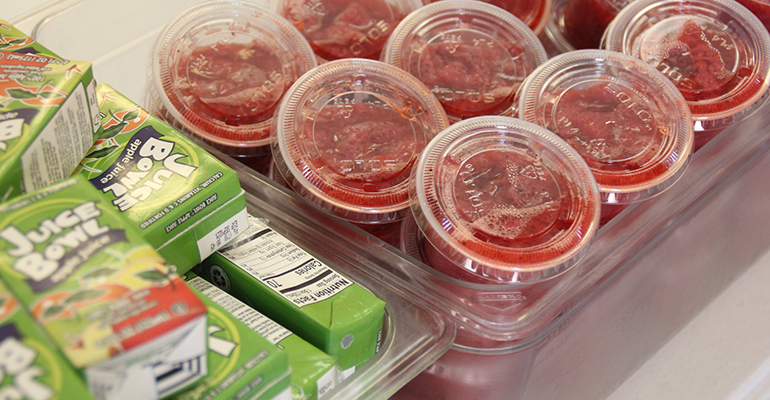 In September, the district expanded the meal program to include a daily snack and supper.

To pull off the robust curbside program, Hall says they purchased a number of hot boxes and carts, but had to use as much existing infrastructure and equipment as they could. They moved refrigerators and coolers to the front doors. Unlike some districts, Hall and the staff knew they would need to deliver food daily; they don’t have the storage to support a weekly pickup for the many thousands of meals they prepare every week. (One site alone puts out 1,500 meals a day.)

Each site does its own cooking—they don’t operate from a central kitchen—so individual staff members made important operational discoveries and decisions to streamline the process. Each site figured out how to reconfigure serving locations for the best flow and practiced batch food preparation.

On October 19, the district welcomed Pre-K and kindergarten students back into the buildings on a hybrid schedule. They started serving food both curbside and in the buildings.

Then an early ice storm blasted the region in late October and hundreds of thousands were left without power. The district lost freezers full of food when 40 sites lost power. A week later, more than a dozen were still in the dark.

“It’s just part of what 2020 is bringing on,” Hall says. They discarded the food and started again.

On November 9, students from first through twelfth grades returned to school on a hybrid schedule. The nutrition department continued refining their systems. In school, they serve the same grab-and-go meals as curbside delivery. Teachers pick up the meals and cart them to their classrooms. Students pick up snack and supper at the end of the day. When students are studying remotely, they pick up curbside meals.

“My staff is really dedicated. They've really dug their heels in,” Hall says. “They’re pretty much heroes, continuing to serve during the pandemic. And they did it with a smile on their face. When I think about what’s consistent [in our schools] in this really non-consistent 2020, it was your lunch lady. Your school nutrition professional was there to feed you and continue to provide meals.”

Hall adds that they’re all looking forward to providing students with a classic favorite this month: a Thanksgiving meal of turkey, mashed potatoes, a roll and blueberry crisp.

“We’re trying to keep a little bit of normalcy in a not-so-normal time.”