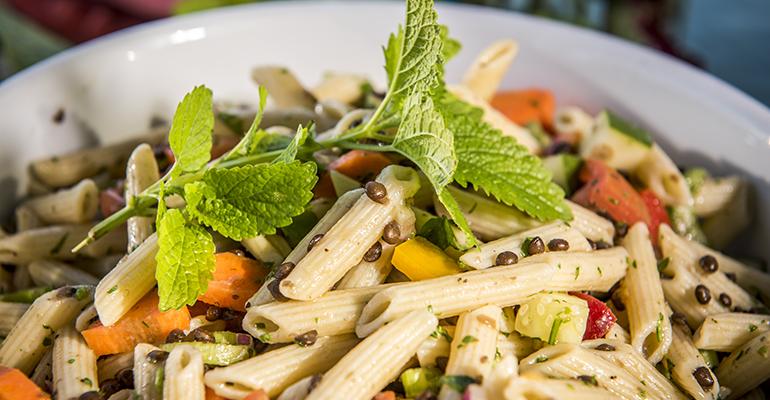 Why one private school decided to start serving only plant foods—and how it made that work.

Sustainability has long been a core part of the curriculum at MUSE School. So when teachers and faculty realized that their cafeteria fare wasn’t matching up with their lesson plans, they decided to change the menu.

Starting this fall, the Calabasas, Calif., private school became the first in the country to serve only plant-based (vegan) foods. “We looked at all the environmental aspects we were teaching students, about reduction and use and management of food energy and water,” says Head of School Jeff King. “And we said, we couldn’t be an environmental school and serve animal products.”

Research suggests that diets that include animal products result in roughly twice the amount of harmful greenhouse gas emissions as plant-based ones. But while going entirely vegan made sense from a sustainability perspective, making the transition wasn’t always easy. “There’s a lot of myths out there, a lot of fear and a lot of misinformation [about plant-based diets],” King says.

So rather than switch to all plant-based meals right away, MUSE underwent a three-year transitional period. To help students and their families get accustomed to the change, MUSE spent a year serving vegan lunches once a week, along with vegetarian lunches and meat lunches each twice a week. The next year, it served two vegan lunches, two vegetarian lunches and one meat lunch. The incremental steps, King says, were crucial for getting families used to the new system.

During that period, the school hosted MUSE Talks, a speaker series where parents could learn more about the nutritional and environmental benefits of plant-based eating. “We explained where kids would get their healthy fats and proteins from,” King says. Meanwhile, Executive Chef Kayla Webb worked with doctors and nutritionists to learn how to prepare nutritionally sound vegan lunches and snacks for the school’s more than 200 students, teachers and faculty members.

“It was nice, because we had three years to experiment and see what worked and what didn’t,” Webb says. In the past, MUSE would serve lunch dishes family-style. But if a student didn’t like one of the new meals, they didn’t have an alternative to eat. Now, Webb relies heavily on customizable dishes that give students the opportunity to build meals the way they like them. Every day, she serves a salad bar with cooked vegetable dishes—like Moroccan carrot salad—along with various lettuces, beans, seeds and homemade dressings. Mix-and-match bowls—like rice and bean bowls with roasted corn, salsa fresca and guacamole—are big, too. “The younger kids especially gravitate towards it because they can make their own,” she says.

Webb also worked to make plant-based versions of meat dishes that had been popular. Beef burgers were replaced with veggie burgers, and tacos got filled with veggie meat instead of animal meat. But trying to find vegan analogs that tasted as good as their animal-based counterparts sometimes took trial and error. “We wanted to find a good cheese product, and the ones we were using weren’t popular. But it seems like in the last year, some really good products have come out,” Webb says.

Still, those problems were far and few between. Because for the most part, Webb relies on fresh, organic ingredients—including plenty of produce plucked fresh from MUSE’s garden, which help keeps food costs in check. Based on the season, students help grow 40 to 60 percent of the fruits and vegetables served at MUSE. The rest comes from local farmers.

Despite targeted education efforts and healthy, kid-approved fare, MUSE still faced plenty of opposition. Many parents felt their kids wouldn’t get enough nutrition from vegan lunches, while others just didn’t like the idea of a private school telling students what they could—and couldn’t—eat. During the transition, the school lost about 40 percent of its student body.

But the numbers have bounced back, and MUSE’s commitment to plant-based eating has even influenced the way students and their families are eating at home. “Most of our parents don’t follow a vegan diet. But the ones that stuck around said they’ve changed their diets to eat more plants, and they’re happy their kids are getting nutritious meals,” King says.

As for how other schools—including public ones that have to work with tight budgets and government nutrition requirements—might be able to follow suit? Start small with a garden. “When students get engaged and experience the complete life cycle of their food, they take ownership. And then they want to eat those foods,” King says.