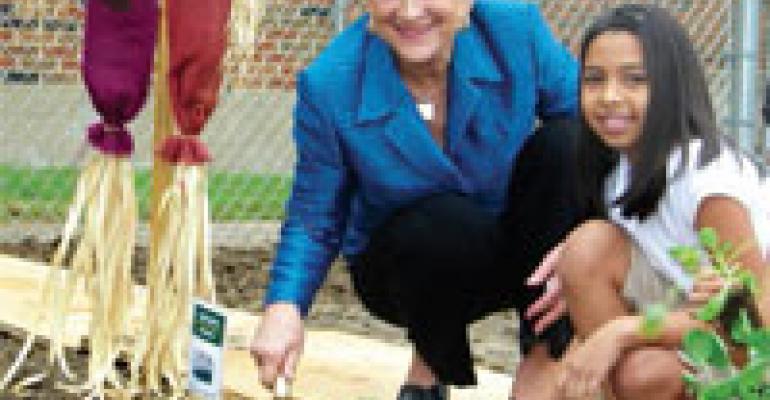 Outlook 2011: New Rules Will Change the Face of School Nutrition

As K-12 school directors look to the years ahead, the most significant forces affecting their nutrition programs will come from implementation of two pieces of Federal legislation that are in the process of final rulemaking as this issue goes to press.

The first will be the USDA's new standards that update school meal pattern requirements to bring them in line with the current “Dietary Guidelines for Americans” as recommended by the Institute of Medicine. (The existing guidelines are based on the 1995 Dietary Guidelines, now more than 15 years old). The second will be the implementation of the Healthy Hunger-Free Kids Act, passed by Congress in December, which re-authorizes and enhances the National School Lunch Act and associated child nutrition legislation.

The impact on K-12 nutrition programs will be dramatic and far-reaching as rules are finalized for both pieces of legislation. To explore some of the major changes that lie ahead, FM interviewed Dr. Janey Thornton, USDA Deputy Under Secretary for Food, Nutrition and Consumer Services.

What do you see as the biggest overall impact of the new legislation?

The three biggest changes will be the improvement of food quality in school meals; the new authority given to the USDA Secretary to control all food sold in schools, including so-called competitive foods sold outside of the school meal programs; and the improved accessibility to nutrition programs the legislation provides, especially through direct certification.

Many say the new requirements will raise meal costs significantly and that reimbursement rates already fall short of the cost of providing meals, especially in very large urban districts.

Meeting the new standards will be a financial challenge for some directors. Yet many are very close to meeting the HealthierUS School Challenge requirements. I can't tell you how many places I have visited — especially districts that have embraced the HealthierUS School Challenge in their menu patterns — that are almost there right now. They have done it by being very responsible stewards of the funds they have.

The legislation offers programs that meet the standards an additional six cents of reimbursement per meal as a reward for achieving the goal.

The law also includes provisions to ensure that meals served to students not eligible for free or reduced-price meals, and food sold outside of the meal program, such as in a la carte foods, are priced at the appropriate level. These are important sources of revenue for school meal programs. Too often, schools do not generate enough revenue from them to cover their production costs.

Doesn't the legislation mention a review of how indirect costs are allocated to nutrition programs?

It does, and we will be looking at them at the federal level to see how practices vary from state to state and district to district. There have been reports that some nutrition departments are paying direct costs that are technically already covered by their indirect cost payments. We will be working with state directors to clarify the definitions and clearly identify what costs districts can charge to a school nutrition department.

How will the standards, especially those dealing with increased vegetable consumption and calorie and sodium limits, affect school purchases and the commodity program?

Product specs will change and we are working with the National Food Service Management Institute to develop courses on procurement to educate directors on those changes. Districts that do on site production or central production will have to adjust to the new specs.

Those that have processing done by manufacturers will find that many are already well along in terms of making the required changes and at improving the flavor and nutrition content to where they need to be. They have seen the writing on the wall for several years and industry is very much aware of the changes that will take place.

Produce purchases will obviously increase, but product can be purchased in many forms, including fresh, frozen and canned. The legislation encourages more sourcing of local product and acknowledges that some purchased this way will go on to further processing so it can be used year round.

I don't think USDA's procurement process for the foods we buy for schools will change dramatically. We already source lower sodium products. A lot of the changes will have to do with where they are sent for further processing if directors choose to use their brown box commodity allocations in that way.

This was a specific recommendation from the Institute of Medicine. A main reason for it is that an important goal of the school meal program is to teach kids how to make good eating choices in their own lives.

In real life, kids don't think — ‘I need more vitamin B-1 today,’ or ‘I need more iron.’ But it is reasonable to teach them to think ‘I haven't had any whole grain today,’ or ‘I haven't had enough vegetables.’ We don't think about food in terms of nutrients, but in terms of food itself, and this will support a more realistic way of evaluating food choices.

That will be a challenge for some districts and a change that will be politically charged for many school boards. Keep in mind that districts putting local resources into their programs can use that funding as an offset, and offer lower priced paid meals that way.

It's important to remember that there are other sources of revenue to support healthy meals in the school lunch program. Making-sure the paid meals are priced at a level that supports their actual cost is one way to help schools with the revenue needed to provide more nutritious meals.

Many superintendents will tell you behind the scenes that this issue is so controversial it has not been possible for them to raise the subject with their school boards. With the new rule, it is out of their hands. Compliance will be overseen in the state CRE [Coordinated Review Effort] audits, which will now be required more frequently, at least at three-year intervals.

It is important that all food made available in schools, whether to raise funds for student programs, in vending machines, to earn income in a la carte lines or for other reasons, need to meet the same nutritional guidelines. The new legislation gives the Secretary the power to regulate this kind of activity because, again, superintendents often found that when they tried to address the issue they met significant local opposition from parents and others.

If child nutrition and an effort to meaningfully address the obesity issue are indeed critical challenges for our society, we have to recognize that we can't balance school budgets by way of encouraging nutritional deficits in the diets of our children.

In that context, how much responsibility for addressing childhood obesity do you believe school meal programs actually have?

As a country, we must quit pointing fingers and trying to place blame on any single thing, whether it is school meals, food companies or parental oversight. The truth is that this is a societal issue that must be addressed by the whole of society.

We have to work at all aspects of the problem: addressing the content of retail food; the portion size in restaurants; how food is promoted and merchandised; and of course, the school meal program. Everyone needs to look in the mirror if we are to address this because it involves behavior change across our society. Schools have a critical role, but they can't do it by themselves.

The new regulations have not yet been finalized and USDA is accepting comments on them until April 13. The final version should be released next January and, if so, will be effective for the 2012-2013 school year. To read the full text of the proposed standards, go to http://edocket.access.gpo.gov/2011/pdf/2011-485.pdf