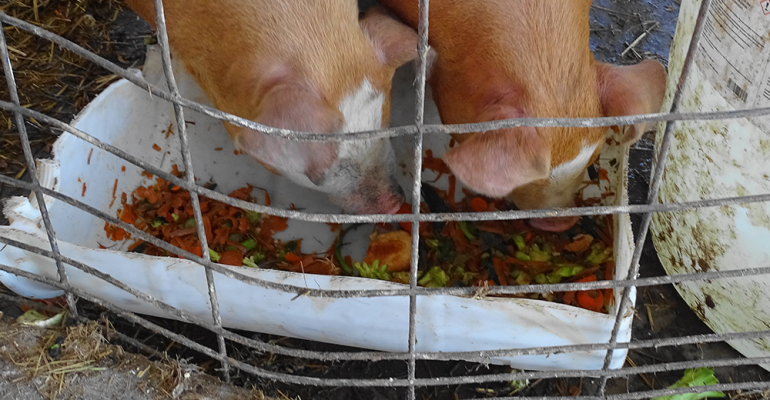 The Tomorrow River School District sends pre-consumer waste to a local farm, where it is fed to hogs the district purchased for that purpose.

Six pigs purchased by Tomorrow River Schools (TRS) in Wisconsin find themselves in hog heaven each school year as they are fed vegetable scraps, expired milk and other pre-consumer food waste generated by the TRS school meal program. The initiative is a way for the district to dispose of food waste in a sustainable way instead of simply tossing it out with the garbage, where it poses an environmental liability in a landfill.

TRS is a small rural district located about a dozen miles east of Stevens Point in the center of the state, and all its grades are located in a single complex with a common foodservice operation, which makes collecting food waste from the entire meal program easy.

The total enrollment is around 1,200 and the foodservice program serves about a thousand meals a day. It generated almost 2,200 pounds of pre-consumer waste over the most recently measured four-month period, which then went to feed the six hungry porkers housed at a nearby farm.

The idea of using pigs to get rid of food waste started four years ago when TRS began a program of recycling milk cartons and wanted to do something with unconsumed milk, recalls Paul Skinner, food service director for the district. 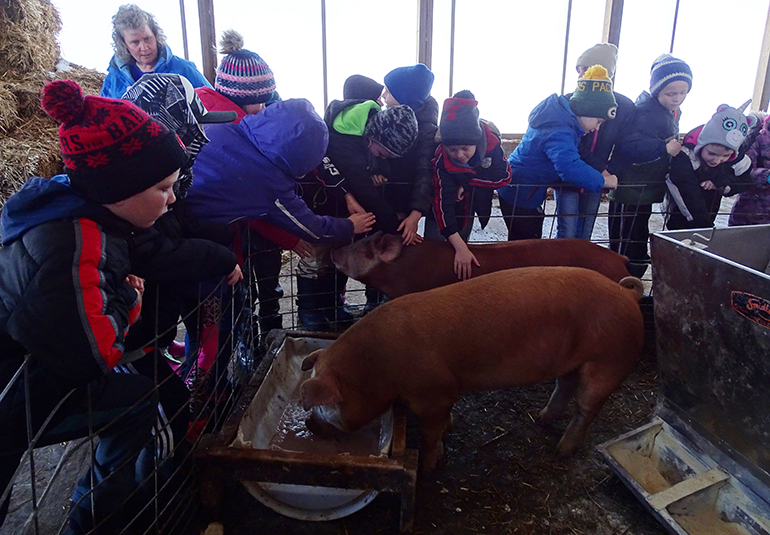 The pigs also serve an academic purpose as second graders annually visit the farm to learn about the animals.

“We ended up [partnering] with a local farm that took care of six pigs for us,” he says. The district secures six new animals each year, and the host farm site now rotates annually to give more farms the opportunity to work with the school system. To help compensate it for taking care of the animals, the host farm each year gets to keep one of the pigs.

Of the other five, three are given to the local PTO to be raffled off as a fundraising venture, one is sold to raise funds for a scholarship foundation and one becomes the centerpiece and center-of-the-plate at TRS’s annual end-of-school-year pig roast.

The district most often purchases the animals, though occasionally it will get a donation from a local farmer.

Much of the food scraps fed to the pigs comes from trimmings and waste associated with the cafeteria salad bar. In addition, the district generally has to dispose of about a dozen gallons of milk daily. The waste is transported to the pigs several times a week, usually by volunteers who are going that way anyway, Skinner explains. The distance varies depending on the host farm but usually not more than a few miles, he says. 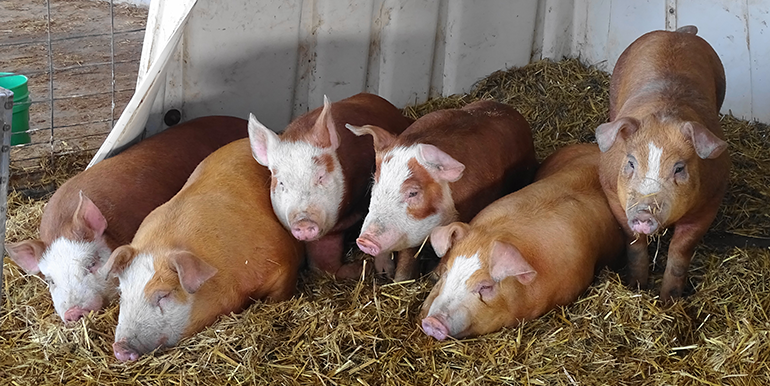 The hogs also serve an educational purpose as each year second graders make a visit to the farm to learn about the animals. Skinner says that could be expanded in the future to incorporate concrete lessons in areas like math and biology for other grades as well, adding even more value to a program that already more than pulls its weight in multiple positive ways.

“What’s cool is that it builds the community because the kids are involved and the host farms are involved,” Skinner summarizes. “Plus, it’s usually teachers and families who are buying the raffle tickets to win half a hog that’s raised here. It’s a win-win-win.”