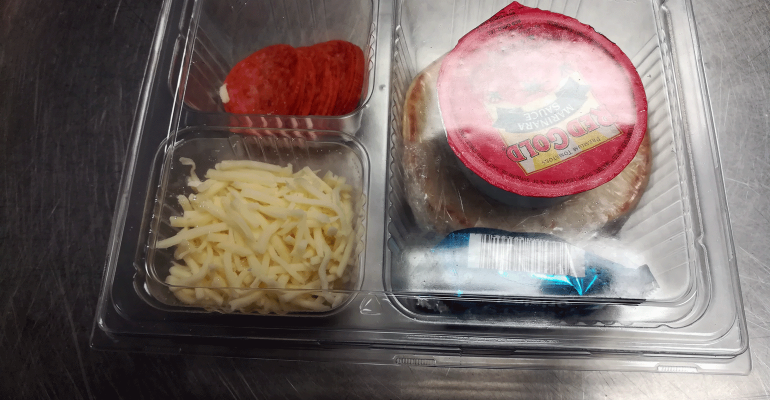 Snacky, hands-on, build-your-own pizza bites served cold in a container are shaping up to be the school lunch of the season.

A couple of months ago, “pizza to go” kits were added as a new entrée option at Schuyler (Neb.) Middle School, and Foodservice Director Jamie Ramirez could see right away that “the kids are going crazy for them!”

Ramirez and her team create the kits with flatbread, a stack of pepperoni, a cup of shredded mozzarella, a container of marinara sauce and an applesauce in a clear clamshell. The students responded so well to pizza to go kits, they are now offered every day as a second lunch option. 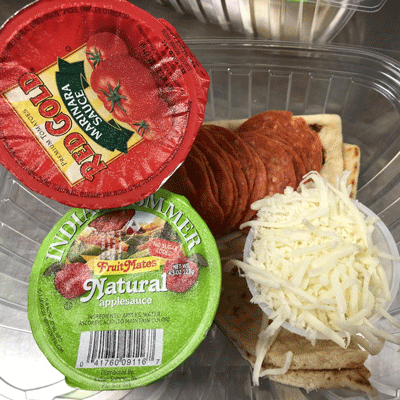 And it’s not just Nebraska kids that are going crazy for these Lunchable-style pizza kits that allow them to play with their food in a way that’s OK with the grown-ups.

Once a week, make-your-own pizza kits are served in the elementary schools of the Charleston Co. School District (CCSD).

“Kids use a piece of pepperoni to spread the marinara on the flatbread, then they put the cheese on and more pepperoni, just like they would with a Lunchable from the grocery store. They love it,” says Jeremy Tunstill, field supervisor of foodservice for CCSD. “These are extremely popular and have helped drive participation, meaning new customers.” 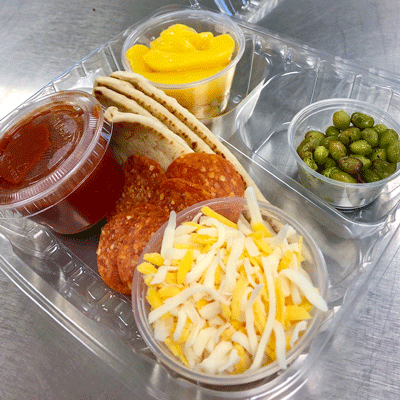 The do-it-yourself fun factor seems to be key in the success of this item.

Before trying it at her district, Jeanne Reilly, director of school nutrition at Windham Raymond Schools in Maine, saw a few examples of pizza kits on social media and decided to test it out.

The Windham Raymond district’s version of the pizza kit is known as the pizza muncher lunch. Served as a cold lunch on days with early dismissal, this kit also comes with cups of roasted edamame (a favorite with students) and peaches. Kids instantly took to the pizza kits, and parents think it’s neat, too, because it’s fresher and healthier than the store-bought versions.

Best Concepts: Chartwells’ Mood Boost teaches the connection between how students feel and what they eat
Sep 29, 2020