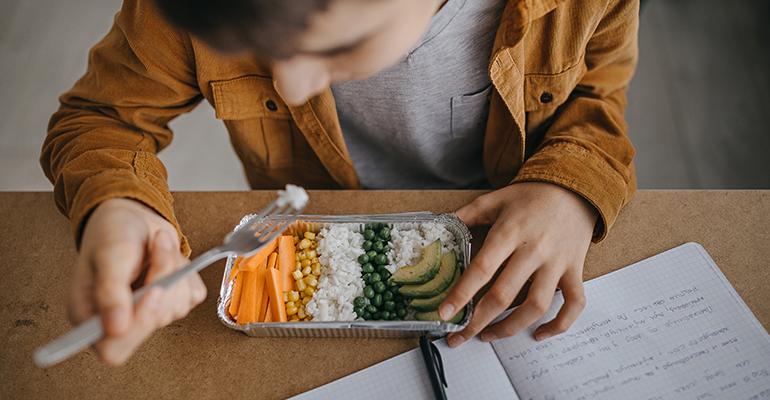 Planning on lunch in the classroom? Directors say you’ll have to limit your menu

As schools determine their back-to-school plans, child nutrition departments are grappling with serving their students—both in school and virtually. Many districts already have breakfast-in-the-classrooms programs, a service tactic that the CDC has suggested that districts use for lunch as well this fall. But some directors warn that supply-chain issues could make that, and other new service styles, more difficult.

These were some of the challenges mentioned by two of the country’s largest school districts in a Back To School with Food Management session hosted this week by FM executive features editor, Mike Buzalka. The session guests were Laura Benavidez, executive director of food and nutrition services for Boston Public Schools, and Michael Rosenberger, executive director for Dallas Independent School District.

The exact way students in these two districts will be receiving lunches in schools is still up in the air, as neither district had announced a plan for schools to reopen in the fall, meaning Benavidez and Rosenberger have had to plan for a range of reopening possibilities.

Some current solutions they are working with include a cart delivering meals to classrooms, varied cafeteria times to pick up lunches or distribution centers stationed in hallways. All of these options end with students eating lunch inside the socially distanced classroom.

Dallas also has the option of turning its large cafeterias into socially distanced spaces, provided all students don’t attend school on the same day, using dividers and creating a flow that prevents people from getting within six feet of one another.

“We want to try to keep things as normal for children as possible,” said Benavidez. “Students are going to be coming back to something that’s completely institutionalized and not normal from what school has meant for them…the challenge for us is how do we as foodservice, an essential part of a child’s day, create a sense of normalcy for kids and that can be in the meals.”

Boston has a slightly different means of approaching the upcoming school year than the widespread Dallas ISD.

Pre-COVID-19, Boston had been serving students in the classroom for years and had a system in place. Using a check system, the teacher marks a student’s preference for breakfast while taking attendance.

But that only gives two choices, a or b. Has customization, something schools have been working toward, become a relic of the past like salad bars?

Well, to an extent, yes—at least for now. Rosenberger and his staff worked to create an app that they are currently planning on rolling out in the high school for students allowing for more customization. Menus have been trimmed significantly to account for the supply chain and nature of prepackaged meals.

“Expectation No. 1 going into this year is a combination of patience, let’s all be a little patient since this is new for all of us, and flexibility because things are not going to be the way things were last year,” says Rosenberger about the return to school. “Sometimes we have to inconvenience ourselves for our students.”

There are other ways school districts may choose to reopen. Some ideas that have been announced in other parts of the country include alternating days in-school with virtual learning days or entirely virtual learning for the next few months, leaving kids with little to no access to the school building to retrieve meals.

As part of the district’s emergency feeding plan during the coronavirus pandemic, where they served over 8 million meals between the third week of March and the third week of July, Rosenberger and his team sent students home with boxes of food for the days they wouldn’t be in schools physically.

Boston’s plan includes coolers in buses where students will pick up the next day’s virtual learning meals on the way home or a boxed meal upon leaving the school building for those who aren’t bussed.

The problem with food meant to last is that there are only so many kinds of produce and meat that can accomplish that, and boxed meals are everyone’s virtual plan, according to Benavidez.

“We’re all clamoring for the same product. Will our supply chain be able to handle that?” asked Benavidez. Both BPD and IDSD are CEP districts.

Rosenberger echoed that thought. “The variety we serve may be impacted somewhat less than what we would have there in the regular school year,” he said.

With all the challenges laid ahead of them, from delivering food to figuring out newer, smaller menus, Benavidez and Rosenberger seem optimistic about what their teams can accomplish because foodservice at K-12 schools is essential.

“We have a saying, ‘We don’t just feed the belly, we feed the heart’, and we’re going to have students who are coming to us afraid and nervous,” said Rosenberger. “We’re going to need to lead with our heart before anything else.”

Join us next week for the third week of Back To School with Food Management, where we’ll focus on the future of the dining hall and new revenue streams at K-12 schools.

This is part of special coverage of the Back to School with Food Management leadership series to help college and K-12 dining programs get ready for the fall. Register for live sessions or on-demand replays at https://webinars.food-management.com/back-to-school/. The series continues July 28 with “What is the Future of the Dining Hall,” and July 29 with “Building Revenue Ideas in a New Normal.”

This series is sponsored by Bush’s.