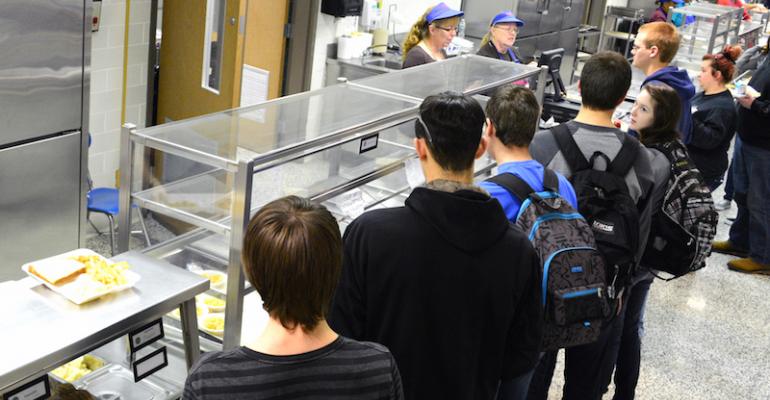 A new debt limit and threatened alternate meals have helped reduce unpaid lunch bills from $51,000 to under $30,000 in a few weeks for Kokomo Schools.

Like many school districts, the Kokomo School Corp., about an hour north of Indianapolis, has struggled with collecting on unpaid and overextended school meal accounts. The 2013-2014 school year ended with a cumulative deficit of around $70,000, which is quite a big deal for the modestly sized district of some 6,500 students.

That number was whittled down to just over $50,000 at the end of last year through an aggressive outreach effort that involved contacting each month parents of students with deficits of at least $15.

This year, a new policy was instituted that cut off further credits after the unpaid balance reached $25. Students without the cash to pay for a meal would get an alternate meal of a cheese sandwich and milk. Students also had the option to bring their own food.

That policy was implemented when school resumed Jan. 4 but only lasted one day. The district suspended it following a backlash from the community (media reports called it the “sandwich of shame”), but apparently it still made quite an impact. Within the next four days, enough outstanding balances were paid down to cut the total owed by around 40 percent, from just over $50,000 to $30,712.43.

And when FM spoke to David Barnes, director of communications for Kokomo School Corp., Jan. 19, he reported that the deficit had dropped even further, to $29,062.25.

The last thing Kokomo School Corp. wants to do is play hardball with its families, Barnes emphasizes. “We’re probably the last school corporation in the state to adopt a [delinquent account cutoff] policy, and [$25] is one of the highest limits of any school corporation in the state,” he says. However, he goes on to explain, fiscal realities dictated the move as the deficit in the cash end of the school meal program threatens government reimbursements to the 61 percent of the district enrollment qualifying for free school breakfasts and lunches and another 8 percent qualifying for reduced price meals.

“What’s in jeopardy here is $1.5 million in federal funding,” Barnes says. He notes that the district faces the threat of seeing the federal funds being cut off if it is determined that they are being used to subsidize the budget deficit on the cash end. Hence the push to get the monies owed from delinquent account balances.

Kokomo now plans to reintroduce the $25 account balance cutoff and the alternate meal for those unable to pay for one Feb. 1, after parents and students have had time to be informed about what was coming. Barnes says one of the mistakes the district made in the initial rollout in early January was inadequate preparation of the community for the change.

“It went in for one day and we then pulled it back because of the kickback and said, ‘Let’s re-evaluate everything and let’s make sure our parents know and our students know,’” Barnes explains. “Every principal is talking to every child on that list so they understand the ramifications if that bill’s not paid, that they can still pay cash or bring their own.”

One result of the inadequately explained initial rollout of the new policy was widespread misunderstanding of who is impacted.

“The kids getting the free breakfasts and lunches don’t have unbalanced accounts and are not affected by this policy,” Barnes emphasizes. “Ninety percent of the people on this [delinquent account] list are in the paid lunch program” (the rest are students qualifying for reduced price meals of 40 cents for lunch and 30 cents for breakfast). One parent on the list had a publicly listed salary of over $100,000!

The alternate meals that were so criticized when they were briefly introduced in early January were actually the district’s voluntary attempt to ensure that no child goes hungry even if the student is beyond the account cutoff and has no cash to pay for a meal. This time around a piece of fruit is expected to be added to the alternate meal to boost the nutrition component.

Barnes says he is confident the new policy will be effective not only in reducing the current deficit even further but ensuring that any future deficit remains manageable.

“Starting in February, no one will be able to owe us more than $25,” he says.